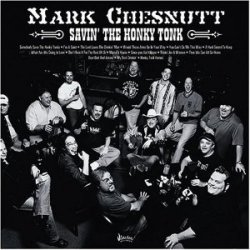 After the relative commercial failure of Thank God For Believers, Mark’s label forced him to record the Aerosmith song ‘I Don’t Want To Miss A Thing’. While this was a big hit, it undoubtedly alienated much of his core fan base, and his career never really recovered. One more album for MCA (the underrated Lost In The Feeling), and a sole release for Columbia (the lackluster Mark Chesnutt), failed to recapture his commercial glories, and Mark was relegated to the minor leagues of independent labels.

Yet the loss of his last major label deal turned out to be a blessing in disguise for Mark as he was enabled to produce some of the best music of his career. His first venture into independent territory (on Vivaton Records) marked a deliberate reclamation of traditional country now that he was free of major label constraints and the need to produce radio fodder. Savin’ The Honky Tonk, released in 2004, is formally dedicated to “all the Honky Tonks and all the bands playing the hard core country music”, and it is almost a concept album with only a handful of the generous 15 tracks not on the theme. Jimmy Ritchey’s production is solid, and Mark’s vocals are great throughout.

The record reached #23 on Billboard – the same peak as Mark Chesnutt, which had benefitted from more radio play thanks to the #11 hit ‘She Was’ – and the first two singles at least did better than his last two for Columbia. While these were only modest successes by his own standards, it’s always been harder for artists on small labels to get played on radio at all, let alone charting inside the top 40.

The lead single, a tongue-in-cheek ode to alcohol, ‘The Lord Loves The Drinkin’ Man’, was one of two songs from the pen of Texas artist Kevin Fowler. The protagonist defies his mother and preacher, both saying he’ll never get to Heaven if he keeps on drinking, by saying,

I hear that He can turn the water into wine
Any man can do that is a good friend of mine
I’ve been baptised in beer, I’m here to testify
I was speaking in tongues when I came home last night
Some folks say I’m living in sin
But I know the Lord loves the drinkin’ man

The single charted well for an independent release, making the country top 40.

Fowler’s other cut here, the resolutely secular ‘Beer, Bait & Ammo’, has also been recorded by Sammy Kershaw and George Jones, and is an ode to a useful country store with “everything any old beer-drinkin’ hell-raisin’ bona fide redneck needs”.

The bright up-tempo tune make this entertaining if not very deep – although it’s not clear why the protagonist doesn’t like dogs in the house.

The third and last single was by far my favorite track on the album, the atmospheric ‘A Hard Secret To Keep’, which was, sadly, less successful, peaking at #59 on Billboard, despite one of the best vocal performances of Mark’s career. Written by Jim McBride and Jerry Salley, it is a very fine downbeat guilt ridden cheating song set in a minor key which may have been a little too uncompromising for 2000s country radio, as the protagonist ponders the chances of his wife finding out his secret:

I never meant for you to touch my heart
I never meant to take one night this far
How much longer can I live this double life I lead?
You’re a hard secret to keep

The almost-title track, ‘Somebody Save The Honky Tonks’, written by Mark himself with Bob Regan and Jimmy Ritchey, is a heartfelt tribute to the dying world of the old fashioned honky tonk, name-checking the 80s Jones/Haggard duet ‘C C Waterback’ along the way. Ritchey and Regan continue the theme with the interestingly put together drunken appeal of ‘Then We Can All Go Home’, as we approach the end of the night with the protagonist not yet having drunk away his loneliness and pain:

Whiskey, there’s still lips you need to kiss tonight
Bottle, there’s a hand you need to hold
Hey, jukebox and cigarettes, your work here isn’t over yet
Just one more then we can all go home.

There used to be a place where I spent all my nights
With kisses sweet, and loving arms to hold me tight
I hate that I have to lay this all on you
But if I can’t turn to old friends, who can I turn to?

The honky tonk crowd is not merely the focus of, but actually takes part in, the ironic ‘Don’t Ruin It For The Rest Of Us’, written by Ritchey with Sam and Annie Tate and Georgia Middleman, and also recorded the same year by Joe Nichols on his Revelation album. This is a jaundiced complaint of the honky tonkers (complete with sing along chorus and bar noises at the beginning and end) to their former friend who has found love and domestic happiness (not to mention that he “smell[s] a whole lot better than anybody in this bar” – dare one suggest some cause and effect here?):

The only downside of this highly entertaining number is the too-casual reference to one of the guys getting “another DUI”, which is not something which should be treated lightly. Ritchey also co-wrote ‘My Best Drinkin’’, this one with Jim Collins and Chuck Jones. This is another honky tonker with the protagonist taking cheerful refuge in the bottle from arguments with his wife.

Mark cogitates on the gender divide a little more predictably in ‘Think Like A Woman’ written by Tony Martin, Mark Nesler and Jim Collins, a moderately successful attempt at comedy. Unimpressed by flowers when the clueless narrator returns home after an unplanned 12 day fishing trip (he thinks telling her there’s one rose for every day he’s been gone is a good idea):

A new heartbreak song worthy of George Jones at his best is ‘Since You Ain’t Home’, written by Dale Dodson, former Curb artist Ken Mellons, and Shawn Camp, which shows the house falling apart without the woman who made it worth calling home:

A brace of covers add to the traditional theme. The lovely ‘Would These Arms Be In Your Way’, written by Vern Gosdin with Hank Cochran and Red Lane, features Lee Ann Womack on harmony, and Mark’s version is warm and tender if not quite matching Keith Whitley’s exquisite version. Mark is more successful putting his own vocal stamp on the less well-known Roger Miller song ‘You Can’t Do Me This Way’, although the production is similar to the original. A very short snippet of Billy Joe Shaver’s ‘Honky Tonk Heroes’ is given a very retro acoustic treatment sounding like a vinyl recording from the 70s with an echoey effect, and is clearly a tribute to Waylon Jennings’ classic album of the same title (as is the album’s cover art depicting Mark surrounded by his band and road crew).

Roger’s son Dean Miller contributed the mid-tempo ‘What Are We Doing In Love’ on the well-worn theme of a country boy in love with an uptown woman. It’s a little cliche’d lyrically but has a self-deprecating charm which combined with the lively tune make it enjoyable. Another respite from the honky tonks and broken hearts comes with a reflective tribute to domesticity and ‘Mama’s House’ comes from Jimmy Melton and Neal Coty, writers of Mark’s last real hit, ‘She Was’, with which this shares a sweet sentimentality.

This is an excellent record well worth checking out if you like neo-traditional country music. It showed that Mark’s heart was in making real country music – something he was continue doing in future years.

Savin’ The Honky Tonk is readily available from amazon, and many other retailers.