Grand Ole Opry star and Country Music Hall of Fame member Mel Tillis has died at age 85. He began recording in the 1950s and was the CMA’s Entertainer of the Year in 1976. He was also a highly regarded songwriter having written such classics as “I Ain’t Never”, “Ruby Don’t Take Your Love to Town”, “Honey (Open that Door)” and many others. He was also the father of Pam Tillis. Here he is singing “Coca Cola Cowboy”, which was a #1 hit for him in 1979.

Rest in peace, Mel. You will be missed.

Leave a comment Posted by Razor X on September 8, 2017

It’s a sad day for country music. In addition to the passing of Don Williams, Troy Gentry, who was half of the duo Montgomery Gentry, was killed today in a helicopter accident. You can read about it here.

Montgomery Gentry made their chart debut in 1999 and were inducted into the Grand Ole Opry in 2009.

It has been announced that Loretta Lynn has suffered a stroke. We wish her the best and pray for a full and speedy recovery.

Last Saturday night, our spotlight artist Crystal Gayle was formally inducted as a member of the Grand Ole Opry by her sister Loretta Lynn, nearly 50 years after she made her Opry debut:

The sad news has been broken that Holly Dunn has died of cancer aged 59.

We highlighted Holly’s music in March 2014.

She is probably best remembered for her Father’s Day favorite ‘Daddy’s Hands’:

In another devastating blow to country music, legendary songwriter Guy Clark has passed away at age 74. Though not well known to many mainstream fans, he was highly respected within the industry. 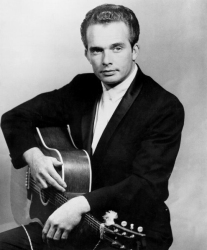 I cannot say that I was surprised to hear of Merle’s death yesterday, but I was tremendously saddened as Merle’s music has been an important part of my life since I was about 13 when “(My Friends Are Gonna Be) Strangers” hit the airwaves in versions by Roy Drusky and Merle Haggard. The Billboard charts say that Drusky had the bigger hit, but the DJs in Virginia mostly played the Haggard version with its driving telecaster and incomparable vocals. At the time I didn’t have much money but by 1968 I had a summer job and purchased the 45 RPM records of “Legend of Bonnie and Clyde” and “Mama Tried”, great songs both. Unlike most 45s, however, the B sides were hardly throwaways. In fact the B side of “Legend of Bonnie and Clyde” was “Today I Started Loving You Again”, arguably Haggard’s most famous and most covered song.

It didn’t take me long to switch to buying the Hag’s albums and I eagerly obtained each new Merle Haggard album as soon as it was available for purchase. Haggard issued a great many albums, and to me they are all cherished friends, although I do prefer the early Capitol albums. Although Merle was a great songwriter, he was also good at selecting material from other writers. Plus he had a strong sense of the past paying proper homage to the likes of Lefty Frizzell, Ernest Tubb, Jimmie Rodgers and Bob Wills. Merle’s tribute to Bob Wills A Tribute to the Best Damn Fiddle Player In The World (or, My Salute to Bob Wills) kicked off the western swing revival that continues to this day,

I had three opportunities to see Haggard live and the shows I saw in 1968, 1975, and 1982 were all great shows, although they differed greatly from each other. The 1968 show was that of a tight little honky-tonk band with a young and enthusiastic Merle as the vocalist and rhythm guitar player. The 1975 show featured a slightly larger band with more western swing elements and featured Merle playing fiddle on some of the numbers. The 1982 featured a much bigger band with whatever survivors of Bob Wills’ Texas Playboys were still playing, and the band featured horns and reeds. In 1968 Haggard may have had a set list but for the later two shows Hag was clearly winging it – and the audience ate it up.

I could cite a number of statistics to support my contention that Merle Haggard was the greatest country artist of all time. I could do that, but I won’t – all that is needed is to listen to the recordings. Kevin over at Country Universe listed the Hag as the #1 male country artist of all time and listed thirteen essential singles. I made the following comment on Kevin’s blog:

“Every Haggard album is filled with treasures that never made the radio, and most of the Haggard singles had very strong B-sides. Kevin’s list of essential singles doesn’t include my two favorite singles and that’s okay – they’re all essential and you can’t have a list that long.”

I still stand by that comment and as Merle makes his way up to that heavenly choir, I will leave you with the lyrics from my favorite Merle Haggard song, “I Can’t Be Myself”

It’s a way of mine to say just what I’m thinking
And to do the things I really want to do
And you want to change the part of me I’m proud of
So I can’t be myself, when I’m with you

It is with a heavy heart that I report the sad news that the great Merle Haggard has passed away on his 79th birthday. His health had been declining for quite some time, especially in recent weeks and months. This is a devastating loss for country music.

News: Joey Feek has passed away

The Tennessean is reporting that Hall of Famer Don Williams is retiring:

News: Why country’s decline is a good thing

Amen! I’ve been saying this for years!

They say that things like this happen in threes. Right on the heels of the deaths of Buddy Emmons and Lynn Anderson, comes the word that legendary producer Billy Sherrill has died. Sherrill was famous for his work with David Houston, David Allan Coe, George Jones, Tanya Tucker and Charlie Rich, but he will be remembered most as the man who discovered Tammy Wynette.

It’s been a tough week for country music. This one is a shocker:

Buddy Emmons, one of country music’s greatest steel guitarists, has died at age 78:

Our thoughts and prayers are with Randy Travis, who was hospitalized in Texas over the weekend after being diagnosed with acquired viral cardiomyopathy. More information is available at CMT.

Update 7/9/13: According to Randy’s publicist, the singer has not undergone surgery as was widely reported in the press today. He remains in critical condition in a Dallas hospital. More details can be found at USA Today.

Update 7/10/13: Doctors say that Randy’s condition has stabilized. Go to CMT for details.

Update 7/11/13: CMT is reporting that Randy has suffered a stroke as a result of congestive heart failure.

Update 7/12/13: The doctors are reporting that Randy is still under sedation and in critical condition as he recovers from surgery on Wednesday night. His family is asking for continued prayers.

Update 7/16/13:  Doctors at Baylor Plano Medical Center released a video update on Travis’ condition and are reporting Travis is “awake and alert and interacting with family and friends”. He will spend another couple of weeks at Baylor Plano before being transferred to undergo physical therapy.

With the passing of George, all the radio heroes of my early childhood, except Ray Price, have gone from the scene. I can’t tell you exactly when I became cognizant of George Jones, as he seemed to have always been there. I remember radio playing songs such as “White Lightning”, “Who Shot Sam?”, “Don’t Stop The Music” , “Just One More” and You Gotta Be My Baby” during the 1950’s and liking the sound of the records, although not necessarily understanding what they were about.

I can tell you when I became a real fan of George Jones and when I started understanding what his music was about. In 1961 I turned nine years old and lived across the street from a kid whose father manifested all of the bad behavior that was revealed in George’s songs. While many sang “the endless ballads of booze and broads” in those less politically correct days, George brought a depth of emotion that few could achieve. But while many singers mined those same waters, few were also as good at singing of other matters such as love and faith. Let’s face it, George Jones could sing even the most mediocre and most maudlin songs with convincing sincerity, so when he had good material to work with, the results transcended what everyone else was doing.

For my money, the very best recordings George Jones ever recorded came during the 1960s. Yes, he became a more nuanced singer later, but he was already 98% at his nuanced peak and his voice was at its absolute peak.

During the 1950s George recorded for Starday and/or Mercury (there were some collaborative efforts between the two labels) and while there was considerable youthful enthusiasm there, the polish had not yet been applied. Towards the end of his run on Mercury a few songs were released that heralded the direction George was going – “The Window Up Above”, “She Thinks I Still Care”, “Tender Years”, and “You’re Still On My Mind”. These songs exhibited a little more careful production than was often the case and were far more introspective than the usual “ballads of booze and broads”. While “You’re Still On My Mind” was not released as a single until after George left Mercury (and accordingly received no promotional push) it was an impressive effort and earned the songwriter Luke McDaniel some additional money when the Byrds included it on their Sweetheart Of The Rodeo album.

I have said many times the 1960s were my favorite era for George Jones recordings. In 1961 George’s recordings started appearing on the United Artists label. While perhaps a bit heavy on the strings and vocal choruses, these recordings feature strong material and find George in fine voice throughout. This era kicked off with a magnificent single, “She Thinks I Still Care” b/w “Sometimes You Just Can’t Win” as the B side. The A side shot to #1 where it stayed for six weeks. I thought the song on the B side was the stronger song – and it proved its worth by shooting to #17. (A new recording of the song would reach the top ten in 1971 for Musicor, plus it would be covered by many other artists) . What better description can you have of despair than

END_OF_DOCUMENT_TOKEN_TO_BE_REPLACED

Classic Rewind: George Jones – ‘A Picture of Me (Without You)’

90s country star Mindy McCready has been found dead as the result of an apparent suicide. For more information on this sad story,read here.

The Queen Is Dead

The legendary Kitty Wells died today at age 92. Born Ellen Muriel Deason in 1919 and known as the Queen of Country Music, Wells was the first woman in country music to score a #1 hit with “It Wasn’t God Who Made Honky Tonk Angels”, which was an answer to Hank Thompson’s “The Wild Side of Life.” Kitty Wells’ success paved the way for other female artists such as Patsy Cline, Loretta Lynn, and Tammy Wynette. The Queen is dead. May she rest in peace.

More information can be found here.

As reported yesterday at Engine 145 and elsewhere, George Jones was hospitalized on Thursday due to an upper respiratory infection. While originally expected to be released following an overnight stay, it is now being reported that he will remain in the hospital until Tuesday. We wish him a speedy recovery. For updates, check his website.