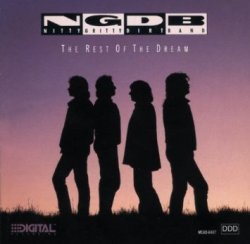 The follow up to Will The Circle Be Unbroken Vol 2 was always going to be a challenge. The band kept Randy Scruggs, who had overseen the Circle II sessions on hand as their producer for 1990’s The Rest Of The Dream, but did not attempt to copy that album at all. Instead it is a solid return to the country-rock which had done so well for them in the 1980s. Unfortunately they may have lost momentum with their focus on the less overtly commercial Circle II, while country radio was being engulfed with fresh new faces and the move to a more traditional sound. Sadly, they were never again to enjoy a top 40 country hit.

The lead single was a cover of rock star Bruce Springsteen’s ‘From Small Things (Big Things One Day Come)’. A dramatic story song about a young girl who elopes with first one man and then another, then shoots her second lover, while the abandoned husband awaits her release from prison, it is delivered in upbeat fashion. It sounds very radio friendly (and convinces as a country-sock song), but peaked at a very disappointing #65. The pleasant but forgettable ballad ‘You Made Life Good Again’ didn’t do much better.

The sunny mid-paced title track, released as the last single with a supporting video, failed to chart at all. It was one of a brace of songs contributed by singer-songwriter John Hiatt, who had appeared on Circle II. It’s enjoyable enough, but I prefer the other one, ‘Just Enough Ashland City’, a charming up-tempo story song in which the narrator finds true love and learns not to judge by outward appearances:

This might have been a more successful single, as might aacouple of other tracks. The gentle ballad ‘Waitin’ On A Dark Eyed Gal’, written by Ron Davies (brother of Gail), is an excellent tune, about holding on to forlorn hope and defying the reality that the narrator has been stood up.

Also great is ‘Blow Out The Stars, Turn Off the Moon’, an excellent song about the end of a relationship written by the brilliant Bobby Braddock, filled with images of their romantic nights under the stars:

When our love was new as the first evening star
We both said “I worship you just as you are”
Then I tried to change you, girl, and I don’t know why
You tried to change me, hey, might as well try
To blow out the stars, turn off the moon
Fade out the crickets and the nightingales too
Take down the magnolias that ride the soft wind
Another love story has come to an end

It is sensitively sung by Jeff Hanna, and beautifully played by the band. This lovely song is my favourite track.

The band’s Jimmie Fadden co-wrote (with Kim Tribble and Bob Garshelis) the charmingly quirky ‘Snowballs’, fantasising about winter walks with a sweetheart, throwing snowballs at the moon:

Hillbilly Hollywood (covered by John Anderson a year or so later on his comeback Seminole Wind album) is about the draw of Nashville for a young musician, which was written by Vince Melamed and Jim Photoglo. I prefer Anderson’s version, but this one is decent.

Jimmy Ibbotson co-wrote ‘Junior’s Grill, a tribute to a favorite diner which would be a great commercial jingle but is a little dull as a song. All four current band members (Hanna, Ibbotson, Fadden and Bob Carpenter) cowrote ‘Wishing Well’, but the song is disappointingly bland.

Overall, though, this is worth picking up –especially as used copies can be found cheaply.