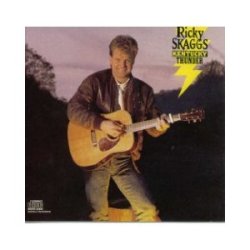 By 1989 Ricky Skaggs was no longer the hottest commodity in country music; the New Traditionalist movement had produced a lot of new and younger competition, and Ricky’s sales and radio airplay figures suffered as a result. However, he closed out the decade of his greatest commercial success with one of the finest albums of his career.

For the first time, he worked with a co-producer — Steve Buckingham — perhaps in part because Ricky was busy producing Dolly Parton’s White Limozeen album at the same time. Dolly’s chart resurgence seems to have rubbed off on Ricky; shortly after her album dropped he scored a #1 hit with “Lovin’ Only Me”, his first chart topper since “Cajun Moon” three years earlier. It was also to be the last #1 hit of his career. However, he did reach the Top 5 one last time with Kentucky Thunder’s second single “Let It Be You”, an excellent ballad written by Kevin Welch and Harry Stinson.

Skaggs was seemingly back in the good graces of country radio, but his renewed success proved to be only temporary. From this point on, none of his records cracked the Top 10. There were, however, three more singles released from Kentucky Thunder: “Heartbreak Hurricane”, which reached #13, “Hummingbird”, which peaked at #20, and the #25-charting “He Was On To Something (So He Made You).” All of them are quite good but my favorite of the three is the energetic “Hummingbird”, which had appeared a few years earlier on a Restless Heart album. One of that band’s more country sounding numbers, it was written by band member Greg Jennings with Tim DuBois.

As far as the tracks that weren’t released as singles are concerned, the best are the grass-is-always-greener themed “The Fields of Home”, “Lonesome For You” (both written by Larry Cordle and Larry Shell), “Casting My Shadow In The Road”, and the ballad “When I Love”, which was written by Don Schlitz and Paul Overstreet, one of the hottest songwriting teams in country music at that time.

Kentucky Thunder lacks the bluegrass flourishes of Ricky’s earlier work, but it is an excellent example of late-80s traditional country. It briefly reversed his decline on the singles chart, it did little to improve his sales figures. Its sole flaw is its brevity; it clocks in at just under 30 minutes, despite the inclusion of an atypical-for-the-era eleventh track (the spiritual “Saviour, Save Me From Myself”). It’s difficult to find, except at absurd prices, but presumably it will join Ricky’s other Epic albums in re-release on Skaggs Family Records. When it does, grab it; it’s well worth it.