Leave a comment Posted by Occasional Hope on November 4, 2011 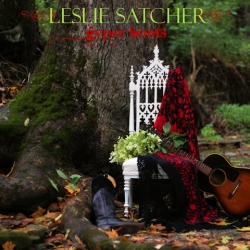 Leslie Satcher is one of my favourite current songwriters, and she is also a fine singer with a velvety tone who can tackle both understated ballads and full-on attack songs with attitude. When she first came to Nashville from Texas, she did so with the aim of becoming a recording artist, before discovering her talent writing, and she has released two previous albums – the excellent Love Letters in 2001 and Creation in 2005. After a long delay, she has returned to the studio to record some of her more recent compositions, and it has proved to be worth the wait.

A couple of the songs are familiar. The title track has been recorded by Terri Clark, who co-wrote it with Leslie and Jon Randall. It’s not a favorite of mine, but Leslie’s version is funky and assertive with a strong rhythm and backing vocals effectively quoting the Motown classic ‘Papa Was A Rolling Stone’, which give it real impact. The unapologetic ‘Tough’ was written for Kellie Pickler and is her most recent top 30 single; the original is okay but has struggled on the charts somewhat, and Leslie’s voice has more force behind it.

The mid-tempo ‘Where I Am’ (written with Michael P Heeney) is on a similar theme to ‘Gypsy Boots’ about a restless spirit with no particular destination in mind (and “only Jesus knows where I am”). It is, however, a much better song, which could easily be a hit if recorded by a major label artist.

The gently sung and pretty sounding ‘Reasons To Hang On’ (written with Stephanie Chapman) has Leslie affirming the joys of life, possibly to someone struggling to find reasons to live:

What more do you want?
You wanna hear the voice of God?
He’d just tell you to hang on
If he could get you on the phone
Oh what’s it gonna take for you to find your faith,
To wake up before they’re gone,
Your reasons to hang on?

The unusual and charming mid-tempo ‘Sing Like Loretta Lynn’ is written with Jim Lauderdale and tells of an angel’s night time visit to a similarly despondent woman, making her forget her broken heart with a vision of the music-filled streets of Heaven. There are also a couple of good but more conventional religious songs, ‘In The Shadow Of Your Wings’ and the very pretty ballad ‘Rock Of Your Love’ (written with Al Anderson and Vince Gill, and previously recorded by Vince on his These Days set in 2006).

The enjoyable and energetic ‘And The Well Run Dry’ is a story song co-written with Jim Beavers, sung with aggressive attack. It tells the story of a moonshining woman who finds religion, something which kills the party mood in the technically dry town:

Y’all, she had the whole town out there getting high
Til she got Jesus
And the well run dry

The effervescent ‘Somethin’ ‘Bout Your Lovin’’ written with Al Anderson and Delbert McClinton has a fun rockabilly feel with lots of Jerry Lee Lewis styled piano. ‘Delta Wedding’ is a slower sultry Southern blues which offers an atmospheric and closely observed picture of a shotgun wedding on a hot summer day in Mississippi, with a melting cake and a bride whose fancy hairdo “even Jesus wouldn’t mess with”:

The melancholic ‘Lonely Doesn’t Know How To Leave’ (also written with Anderson) has a soothing vocal as the protagonist stays up all night dwelling on her sadness.

Leslie’s voice is shown off by the completely acappella solo delivery (and occasionally spoken) of the closing story song about her father’s journey to visit relatives, ‘Georgia Trip ‘56’, which is a tour de force. There are also impressive harmonised acappella opening to ‘If I Had Wings’, a delicate ballad with a lovely tune, and ‘Where That Train Was Going’, a gripping story song written with Jon Randall, which has a bluesy feel.

This record is a joy from start to finish, although the overall feel is a bit bluesier and less traditional than one might expect from her songs written for others.

It is widely available digitally. Hard copy CDs can be obtained from Leslie’s website or from CDBaby, where you can also hear brief clips of the songs:

Amazon also sells the CD version, but at a higher price.