Album Review – The Byrds – ‘Sweetheart of the Rodeo’

Leave a comment Posted by Jonathan Pappalardo on April 3, 2014 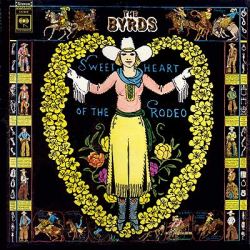 For more background on Sweetheart of The Rodeo, including insights into the recording sessions, click here.

Just as Chris Hillman was enrolling at UCLA, he got a call from his old manager Jim Dickson to join a new band as their Bass Guitar player. The Byrds as they came to be known consisted of Roger McGuinn, David Crosby, Gene Clark, Michael Clarke, and Hillman. He’d never picked up a bass guitar before, but his bluegrass background led him to quickly master it while developing his own style with the instrument.

Although he remained quiet on the bands first two releases, he quickly rose to the forefront, and he blossomed as a singer and vocalist after Clark left the band. By 1968, the band was down to just Hillman and McGuinn after Crosby bid his farewell. To replace him they hired Gram Parsons, who along with Hillman changed the sound of the band to reflect a country rock style, which was unheard of in the music industry at the time. This revolution was captured on The Byrds’ Sweetheart of The Rodeo, which was released on August 30, 1968.

The album found Hillman playing a supporting role yet again, as Parsons and McGuinn shared the brunt of the vocal duties. Parsons, who was little known at the time, was brought to the forefront of mainstream rock because of this album.

Sweetheart of the Rodeo was originally supposed to be a reflection of American popular music incorporating elements of Jazz and R&B but Parsons steered the project into a pure country album instead. This move was highly controversial, as Nashville had little interest in embracing a band they thought of as longhaired hippies attempting to sabotage country music. In the mists of all the hoopla, Parsons left the band, and wasn’t even a member when the August release date came around.

A cover of Bob Dylan’s “You Ain’t Going Nowhere” was released in April as the project’s lead single. The band heard the tune on a collection of Dylan’s Woodstock demos and thought it appropriate for them to cover. The mid-tempo ballad features an assist from Lloyd Green on Pedal Steel and came more than three years before Dylan would commercially release the track himself. It peaked at #74 on the Billboard Hot 100 Chart.

Hillman and McGuinn arranged the second and finale single “I Am A Pilgrim,” which failed to chart. The folk song is a bit more country sounding than the Dylan cover thanks to McGuinn’s banjo and some lovely fiddle playing by John Hartford.

Even more famous than the two singles is Parsons’ “Hickory Wind,” a fiddle and steel ballad he co-wrote with Bob Buchanan on a train ride from Florida to Los Angeles. The song is marred in controversy, from claims it wasn’t Parsons but a blind folksinger named Sylvia Sammons who wrote it, to being the tune that got them banned from The Grand Ole Opry. As the story goes, Parsons sang it instead of their planned Merle Haggard cover of “Life In Prison” and thus ticked off the country music establishment and sent shockwaves through the audience. Nonetheless “Hickory Wind” is an excellent song that still endures today.

Parsons also wrote “One Hundred Years from Now,” a tune in which McGuinn and Hillman shared lead vocals and Green once again contributed pedal steel. It’s another excellent song and I love the production on it, too, thanks in a large part to Green’s beautiful flourishes of steel.

The remainder of Sweetheart of the Rodeo consisted of cover songs. The band revived soul singer William Bell’s debut single “You Don’t Miss Your Water,” which had only been released five years earlier. The band’s version is similar to Bell’s although they take out the horns in favor of steel guitar performed by JayDee Maness.

Songs by The Louvin Brothers and Cindy Walker also appear. Charlie and Ira’s “The Christian Life” doesn’t differ much in The Byrds’ hands, but they manage to turn it into a honky-tonk stunner (with a wonderful lead vocal by McGuinn) and one of the album’s more twang-centric songs. Walker’s “Blue Canadian Rockies” is in similar vain and one of my favorite of this albums’ numbers thanks to the twangy guitar and Hillman’s wonderful lead vocal.

The aforementioned Haggard (and Jelly Sanders) song “Life In Prison” appears here, too. It’s stunning through and through from Manass’ steel guitar to Parsons’ lead vocal. He finds a way to channel Haggard while still making the song his own.

I also adore their version of Woody Guthrie’s “Pretty Boy Floyd,” a folk song about the titular bank robber. The band dresses it up with Hartford’s otherwordly banjo riffs and Hillman’s gorgeous mandolin picking. McGuinn also has a natural knack for storytelling that serves him well as he shoulders the lead vocal duties.

Luke Daniels’ “You’re Still On My Mind” is another Parsons fronted number featuring Maness on steel guitar. The results are glorious as the sunny steel is ear candy for the listener. The album closes with a final Dylan cover, “Nothing Was Delivered.” McGuinn takes the lead and with Green on pedal steel, the results are wonderful.

Full disclosure – before writing this review I’d never listened to an album by The Byrds, Chris Hillman, or Gram Parsons (although I do own Grievous Angel on vinyl). And as a formal introduction it doesn’t get much better than Sweetheart of the Rodeo. The album is a classic in every sense of the word and a pure delight to listen to forty-six years later. I had an idea what to expect when I went in to listen, but I had no idea what a fabulous steel guitar record this would turn out to be. Lloyd Green and JayDee Maness are masters of their craft and just a pure joy to listen to. If you don’t own your own copy of this album I suggest you run out and buy one as Sweetheart of The Rodeo is a must own for any fan of country or roots music.