One of the biggest mysteries in contemporary country music has been the ongoing stagnation at the top for female artists. Not since Taylor Swift debuted with “Tim McGraw” in June 2006, has a woman been able to have consistent airplay for their singles. Some (Jana Kramer and Kacey Musgraves) have launched big but seemingly fizzled out while others (Kellie Pickler and Ashton Shepherd) have been dropped by major labels after multiple albums worth of singles couldn’t peak better than top 20. You have to look at duos and groups to find any other females (Jennifer Nettles, Hillary Scott, Kimberly Perry, Shawna Thompson, Joey Martin Feek) who are having success and even they have enough male energy to keep them commercially viable.

Let’s not forget that two summers ago, fourteen days went by without a single song by a solo female in the top 30 on the Billboard Country Singles Chart. With the demographics in country music skewing younger and the music-seeking public increasingly more and more female, is there any hope this pattern will change? Can anyone break through the muck and join the ranks of Swift, Miranda Lambert, and Carrie Underwood?

If anyone can, it’s Danielle Bradbery. She has three strikes in her favor already – at 17 she’s young enough to appeal to the genre’s core demographic audience, she’s signed to the Big Machine label Group run by master monopolizer Scott Borchetta, and as winner of The Voice, she has Blake Shelton firmly in her corner. Plus, she’s an adorable bumpkin from Texas who has enough charisma and girl next door appeal to last for days.

They also nailed it with her debut single. “The Heart of Dixie” isn’t a great song lyrically speaking. Bradbery is singing about a girl named Dixie who flees her dead-end life (job and husband) for a better existence down south. But that’s it. There’s nothing else in Troy Verges, Brett James, and Caitlyn Smith’s lyric except a woman who gets up and goes – no finishing the story. How Matraca Berg or Gretchen Peters would’ve written the life out of this song 20 years ago. Also, could they have found an even bigger cliché than to name her Dixie?

But the weak lyric isn’t as important here as the melody. It has been far too long since a debut single by a fresh talent has come drenched in this much charming fiddle since probably Dixie Chicks. The production is a throwback to the early 2000s – think Sara Evans’ “Backseat of a Greyhound Bus” – and I couldn’t be happier. So what if the arrangement is a tad too cluttered? Who cares if Bradbery needs a little polish in her phrasing? There isn’t a rock drum or hick-hop line to be found here, and in 2013 country music that’s a very refreshing change of pace.

Bradbery isn’t the savior for female artists in country music. Expect for her Voice audition of “Mean” and a performance of “A Little Bit Stronger,” we’ve yet to hear Bradbery the artist, although Bradbery the puppet has been compelling thus far. Her lack of a booming vocal range like Underwood’s may also hurt her, but isn’t it time someone understated turned everything down a notch?

With everything she has going in her favor, Bradbery may be our genre’s best hope for fresh estrogen. I don’t see her injecting anything new into country music, but redirecting the focus back to a time when “Born To Fly”-type songs were topping the charts, isn’t a bad thing in my book. Hers mostly likely won’t be that lyrically strong, but if she can keep the fiddle and mandolin front and center – I won’t be complaining. 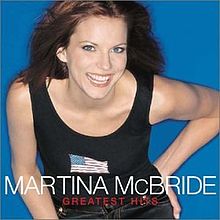 One of the longest raging debates in the career of Martina McBride is the point in which her music took that pivotal turn from excellent to uninspired dreck. To an extent, it happened with Emotion, but I would argue the last truly great original music McBride has recorded came in the form of the four new tracks included on her Greatest Hits album.

In 2001 RCA saw fit to take stock of McBride’s career to date, releasing her first comprehensive career retrospective. The release came one week following the 9/11 terrorist attacks and in an eerie parallel, McBride is seen wearing an American Flag tank top on the cover. McBride has stated that the cover wasn’t in response to the attacks (which would’ve been impossible given the CD and cover art were planned long before the release) but rather homage to her signature tune “Independence Day”.

For longtime fans the most intriguing aspect of the project wasn’t the music itself but the CD booklet, which featured ample liner notes from McBride and her producer Paul Worley discussing each track. It was great to read the stories behind the songs and gain insight into their thought processes. It’s kind of a shame most artists don’t take the time to do this, as the deeper level of appreciation I gained for McBride is invaluable.

Although the project itself is fairly typical, it only includes her top ten hits; the generous 18 tracks covering 69 minutes make it my favorite Greatest Hits album of all-time. And although it omits The Time Has Come and singles like “Cry On The Shoulder Of The Road,” it’s an excellent comprehensive overview of McBride’s career to date.

The new tracks show an artist experiencing an artistic uptick. All four, vastly different from one another, perfectly illustrate the different sides of McBride’s musical personality while concurrently displaying her measured growth as an artist.

“When God-Fearin’ Women Get The Blues,” penned by Leslie Satcher, was the lead single peaking at #8 in late summer 2001. A rocking story song, the track proved a departure for McBride both thematically and musically – with a mix of dobro and fiddles (as well as The Soggy Bottom Boys from O Brother, Where Art Thou? providing backing vocals), it was the most traditional-leaning track she’d recorded in more than four years.

“Blessed,” a somewhat self-indulgent optimistic prophecy came next, topping the charts in early 2002. Her last #1 to date, the Brett James, Hillary Lindsey, and Troy Vergas penned tune is far more pop than its predecessor, but she sings it well and I really like the vibe of contentment, a mirror of her personal life. Unfortunately the track sounded better back then. The addition of the drum machine feels very dated more than ten years later.

Far more consistent was the excellent third single, Rick Ferrell and Rachel Proctor’s “Where Would You Be.” By far the strongest of her relationship-turned-sour songs, McBride has never sounded better on record, turning the chorus into a rousing tour-de-force. The track peaked at a respectable #3, but fully deserved to follow “Blessed” to the top of the charts.

McBride hit another high note with Stephanie Bentley and Rob Crosby’s heartbreaking child-negligent tale “Concrete Angel.” Even with the grim subject matter, I’ve always loved the song – it was easily one of the strongest story songs at country radio in the fall of 2002. Bentley and Crosby execute every detail perfectly, from the teacher who ignores the signs to the night she’s killed at the hands of her mother. You feel for the little girl who slipped through the cracks, and it kind of makes you look at your life differently. Next to “Where Would You Be” this is my favorite of the four singles.

Sadly, I had very high expectations that McBride was destined to follow in Kenny Chesney’s footsteps and become huge with her albums to come. I thought this would mark the beginning of a McBride routinely nominated for Album of the Year trophies and selling out large concert tours. I wasn’t prepared for the reality of what did transpire, album after album of dreck (the next one had singles that were far lesser retreads of “Where Would You Be” (“How Far”) and “Concrete Angel” (“God’s Will”) that just didn’t measure up, but at least we have moments like these to remember when she was one of the best contemporary songstresses around.