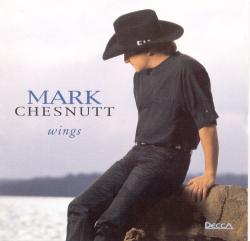 Around the middle of the 1990s Mark Chesnutt’s career began to wind down commercially. Wings, released in 1995, was his first album not to be certified at least gold, but it marks a return to form after the disappointing What A Way To Live, his first for MCA’s sister label Decca. There was a new producer at the helm, Mark Wright being replaced by label boss Tony Brown, and he did a good job with a sympathetic production.

Sadly, however, Mark was beginning to outwear his welcome at radio. It probably didn’t help that some of the less memorable tracks on this album were selected as singles. ‘Trouble’, with its bluesy and apparently radio-friendly groove, performed extremely disappointingly (especially as the lead single for a new release), barely cracking the top 20. The song lacks much melody, and it’s not one of my favourite Chesnutt recordings; but it is mildly notable as an early country cut for its writer, Americana singer-songwriter Todd Snider.

There must have been a sigh of relief all around when ‘It Wouldn’t Hurt To Have Wings’, a sprightly take on the difficulty of getting over someone, which lends the album its title, reached #7 on Billboard. I like this song although it is relatively lightweight. The third and last single, though, the semi-comic tale of an ill-fated night out in the ‘Wrong Place, Wrong Time’, penned by Jimmy Alan Stewart and Scott Miller, was Mark’s biggest flop to date, only just squeezing into the top 40. It changes the pace both in terms of tempo and mood, and is enjoyable enough, but is not really funny enough to work as a comic song.

It was lucky for Mark that ‘It’s a Little Too Late’ (from a hasty Greatest Hits release) brought him back to the top of the charts in 1997 – but he would never again enjoy the consistent streak he had had at the beginning of the 90s. No career lasts forever, but I think the label may have made the wrong choices for singles to promote this album, as there are far stronger songs on the set.