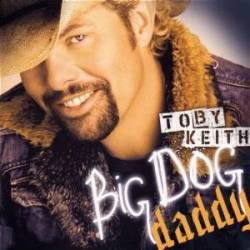 Big Dog Daddy represents a new step in Toby Keith’s career, being the first of his albums that Toby produced entirely on his own. Released on Toby’s Show Dog Nashville label, in June 2007, the album debuted at #1 on both Billboard’s Country and Top 200 (all genres) chart; however, the album only reached Gold sales status whereas nine of his eleven previous albums went at least Platinum.

This album featured Carter’s Chord (sisters Becky, Emily and Joanna Robertson) doing the harmony vocals. Sonically it’s a nice album, but I don’t regard any of the songs on the album as being among Toby’s strongest efforts.

The album opens up with the first single, the #3 hit “High Maintenance Woman”. Written by Toby with Tim Wilson and Danny Simpson, the song is typical Toby fare

The second track, “Love Me If You Can” was also the second single and it deservedly went to #1 . One of only two songs not written by Keith (Craig Wiseman and Chris Wallin wrote it) this tender ballad is the best song on the album.

I’m a man of my convictions
Call me wrong, call me right
But I bring my better angels to every fight
You may not like where I’m going
But you sure know where I stand
Hate me if you want to
Love me if you can

Fred Eaglesmith penned “White Rose”, a song that rides the line between folk music and country music. I like the song and appreciate that Toby recognized the merits of the song which is nostalgic about such diverse elements as full service gas stations and teenage angst. I think this song should have been a single.

Track four is the final single from the album, “Get My Drink On”. The song topped out at #11 and while it is an up-tempo and catchy song it is also silly and trivial. Toby co-wrote this song with Scotty Emerick and Dean Dillon. It is probably the most country sounding song on the album.

Well I got some little problems and the only way to solve ’em is the sure-fire way I know.
And when the going gets tough, well the tough get going to the little bar down the road.

Toby had a hand in writing the remaining tracks on the album. Toby’s “Big Dog Daddy” really rocks but it is rather generic. Still I could see releasing it as a single:

Hey Daddy!
Oh yeah
Well I’m a big dog daddy you know my face
And the joint starts rockin’ when I walk in the place
The band starts stompin those rhythm guitar
And the dance floor is jumpin’ through the back of the bar
Everybody looks better in the neon lights
When a plan comes together on a Saturday night

Yeah, the parking lot is packed and that’s a pretty good sign
I take it right in the back I don’t stand in line
The boys all lookin’ and a hittin’ the spot
Sayin’ the girls start shaking everything that they got
When a little cat momma gets ready to ride
I got Lincoln continental waitin’ right outside

The remaining tunes with writers in ( ) are:

I own most of Toby’s albums and this album is the one I pull out least. For some reason, this album feels like Toby was coasting a bit or perhaps distracted by the demands of establishing his record label. There are no duds but no real gems either, other than the two songs from outside writers. Toby is in good voice throughout. He would issue better albums and singles in the years to follow. As for this album, I’d give it a B.