I was distinctly underwhelmed by Alan’s last album, Good Time, and as a result I was concerned about what to expect this time around, especially as I wasn’t impressed by the lead single. Thankfully the album is a considerable improvement. Alan has written most of the songs again, but he seems to have regained his muse, which was noticably lacking last time around. Keith Stegall is in the producer’s chair as usual; always reliable, he does one of his best jobs here, making every song sound good.

After that initial sense of apprehension, then, it was with a great sense of relief that I heard this album kicking off with some fiddle as ‘Hard Hat And A Hammer’ (one of the tracks which was pre-released on iTunes) opens the album with one of the best of Alan’s trademark tributes to the working man, described here as the “kind of glue that sticks this world together”. In the outro, he even remembers to include a nod to the working woman.

In contrast, there is a paean to the joys of escaping from it all for a life at sea in ‘That’s Where I Belong’.

That lead single and current top 20 hit ‘It’s Just That Way’ is one of the few songs not written by Alan himself; it comes from producer Keith Stegall, Vicky McGehee and Kylie Sackley, and is one of the record’s dullest moments. Alan sings it beautifully, but the song is just plain dull. I cannot imagine why it was thought a suitable first single. The only other song as lackluster on this set is Alan’s own ‘Big Green Eyes’.

A more enjoyable love song is the beauty and cheerful ‘I Could Get Used To This Lovin’ Thing’; it breaks no new ground lyrically but is enjoyable to listen to. The closing ‘The Best Keeps Getting Better’ is a more mature appreciation of a love which has grown stronger and deeper over time despite ups and downs, which is clearly addressed to Alan’s wife of 30 years – the perfect anniversary song:

I love you now more than ever

Alan draws more inspiration from his family with ‘After 17’, a tender portrait of his daughter as a young woman growing up, and “suddenly a child no more” as she tries to “find her place in this crazy world”.

The other love song here is the charming ‘True Love Is A Golden Ring’, which Alan wrote with Roger Murrah a few years ago and gave his nephew Adam and his wife and singing partner Shannon (the Wrights) to record on their excellent self-titled eight-track EP. Alan’s own version, which should bring this lovely song to a wider audience, features Rhonda Vincent on backing vocals, way back in the mix.

END_OF_DOCUMENT_TOKEN_TO_BE_REPLACED

Album Review: Alan Jackson – ‘What I Do’ 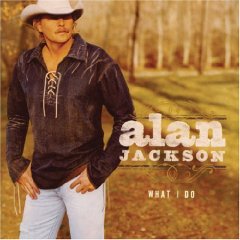 After having a very successful run in the early 90’s most “hat acts” faded away toward the end of the decade in favor of the crossover artists like Shania Twain. Alan Jackson however, was able to keep his success going and while there’s no telling what it was that kept him in the spotlight, I would credit his continued output of high quality material along with his masterpiece album Drive. Throughout the rest of the decade he put out many albums that attracted a lot of attention. However with his major hits Drive and  Greatest Hits II on one side, and his artistic adventures Precious Memories and Like Red On A Rose on the other, What I Do was kind of ignored in the grand scheme of things.

Sure, the first two singles went Top 5 and the other two both made it to #18, but when talking about Alan in the 00’s What I Do is unjustly left out of most conversations; even his weakest album, When Somebody Loves You, gets more press writing.  What I Do, like every single Alan Jackson album, was certified gold by the RIAA.  It would eventually go platinum as well.  To date, Jackson has released 13 studio albums, all of which have gone gold or better, including his covers and gospel albums.  It’s also worth mentioning that 12 of these have sold over 1 million copies (and several going into multi-platinum status), with 2005’s adult contemporary-leaning Like Red On A Rose stopping short of platinum, but still moving over half a million copies to earn its own certification.  Such is the star power of Alan Jackson, and the consistency of good to great material in his catalog throughout his career.

This particular album was released September 9, 2004, and is one of the strongest albums Alan recorded in the past decade. It’s one of the albums I reference when I am talking about how traditional country should have evolved. There’s your drinking songs (‘Strong Enough’), your love songs (‘If Love Was A River’), your religious song (‘Monday Morning Church’), honky tonk song (‘Burnin’ The Honky Tonks Down’) and your country ditty (‘The Talkin’ Song Repair Blues’).

Now while I think very highly of this album, I do know why it is the least talked about album. It hits every note it’s supposed to, it sounds great, with Alan delivering every song in his signature delivery. However that’s the problem, there was nothing new on this album; it’s a strong collection of songs that we’ve unfortunately all heard before. Most of these songs sound like you could insert them on the four previous albums he’d released and they’d fit right in. Consistency is great, look what it’s done for George Strait; he’s rarely experimented with his sound and he’s now one of the most successful country singers in history. Alan though has done more or less the same throughout his career but this is the first album where it’s so strongly felt.  Fifteen years into your career is about when taking risks should be done – which he did on his next three albums.

END_OF_DOCUMENT_TOKEN_TO_BE_REPLACED

January 2002 saw the release of Alan’s tenth studio album, which showcases him as a confident singer-songwriter at the height of his commercial success. He is in fine voice, and Keith Stegall does his usual excellent job in the producer’s chair. Drive was the first of Alan’s albums to debut at #1 on the cross genre Billboard Hot 200 chart, despite making no concessions to crossover tastes, and it was named the ACM Album of the Year. But this is a record where one song has an impact which overshadows everything else.

Alan’s masterpiece ‘Where Were You (When The World Stopped Turning?)’ defined a nation’s mood in the aftermath of 9/11. Alan had not originally intended to record it at all, but the popular response after he sang it at the CMA Awards in November 2001 led to a studio version being released as a single. When it was a #1 smash hit, it obviously had to be included on his new album. Over eight years on, it has lost none of its emotional impact, either in the studio recording or the original live version, which was added as a bonus to the end of the album, including Vince Gill’s introduction. If nothing else on the album is of quite the same calibre, that is because few songs can approach the perfection of this. Part of what makes it so effective is that it offers no judgment of the various choices he imagines people taking; it is entirely inclusive. It still makes me cry every time I hear it, with its quiet questioning and insistence that love is what really matters in the end:

Where were you when the world stopped turning on that September day?
Did you weep for the children who lost their dear loved ones
And pray for the ones who don’t know?
Did you rejoice for the people who walked from the rubble
And sob for the ones left below?….

Did you go to a church and hold hands with some strangers?
Stand in line and give your own blood?
Did you just stay home and cling tight to your family
And thank God you had somebody to love?…

But I know Jesus and I talk to God
And I remember this from when I was young
Faith, hope and love are some good things He gave us
And the greatest is love

The song received another accolade by being included (in a cover version by The Wrights, Alan’s nephew and the latter’s wife) as one of the songs illustrating America’s history in Song Of America, a three-CD collection produced for US schools.

Eight of the twelve songs on the album were written solely by Alan. The opening track, and second single, ‘Drive (For Daddy Gene)’, which provides the album title is a very personal nostalgic look back at a childhood spent with his father around boats and cars. Car songs tend to leave me cold, but this one has an engaging warmth impossible to dislike, and it duly headed straight to #1. The car theme is bookended with the final track, the awkwardly scanning ‘First Love’, about his teenage love for his first car, restored to him in 1993. The driving theme is further illustrated in the CD liner notes with appropriate symbols taken from road signs attached to the lyrics of some of the songs.