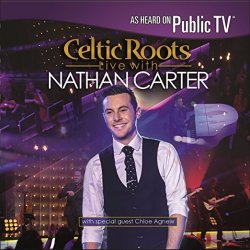 For whatever reason, I was unable to obtain a digital copy of the album Where I Wanna Be. Instead, Amazon continuously linked me to the above-referenced album, which contains the song “Where I Wanna Be”, so I went ahead and purchased the digital download.

I will say that this 2017 release is not exactly a country album, but it is a good value for money with 18 tracks of mostly Celtic music, well performed. I happen to be a huge fan of traditional Irish folk music with a large collection of the stuff. This album apparently is of a performance for public television.

Recorded in Ireland, this album presents an interesting mix of classic of Irish folk songs, Celtic ballads, some country-flavored ballads and some of his hits. Nathan is joined by his stage band, a string quartette, a choral group and also by a former member of the group Celtic Woman, Chloe Agnew.

The album opens up with “Loch Lomond”, a very familiar Scottish tune given the full Scottish treatment with bagpipes and some sort of orchestral backing and a modern rhythm track. Nathan slows the song down considerably at the start of the vocal but picks up the tempo on the second verse. Nathan presents a very interesting treatment of a song that I’ve heard countless times before, including in many Hollywood movies.

Next up is “Where I Wanna Be”, a country single from 2013, written by Carter, that is simultaneously both country and Irish.

This is followed by “Caledonia” an Irish folk song (not the 1940s jump hit by Louis Jordan and/or Woody Herman. This lovely ballad was released as a single in 2013.

“Banks of Roses” is a very Celtic ballad with bodhrán, fiddle, accordion, penny whistle – the sort of thing the Chieftains would play.

The medley of “Spanish Lady”, “As I Roved Out” and “The Real Auld Mountain Dew” is a reflection of the great Irish folk groups of the past two generations such as The Clancy Brothers & Tommy Maken, The Dubliners and The Dublin City Ramblers with perhaps a little more rhythm thrown in. This is a fabulous medley – even someone with two left feet such as I, feels the urge to get up and dance.

Next up is Chloe Agnew with the quiet ballad “Grace” basically accompanied by acoustic guitar and little else. This is probably the slowest song on the album.

An Irish tin whistle (or pennywhistle) opens up “Hard Times”, served up as a duet between Choe and Nathan. Most will probably be familiar with the song through Bob Dylan’s recording, but the song dates back to 19th century American writer Stephen Foster:

Let us pause in life’s pleasures and count its many tears,
While we all sup sorrow with the poor;
There’s a song that will linger forever in our ears;
Oh! Hard times come again no more.

For me, the only misstep on the album comes with the next song “Bridge Over Troubled Water”, a Paul Simon song that I’ve heard far too many times. Nathan sings it well but the chorus and strings are overkill – he should have given it the two minute Buck Owens treatment.

“Wagon Wheel” was a Bob Dylan song fragment that Ketch Secor of Old Crow Medicine Show completed. Nathan released it as a single in 2012. The song reached #12 on the Irish pop charts, his biggest hit. I really like this version, probably better than any other version I’ve heard aside from Jeremy McComb’s outstanding hard country version from decade ago.

This is followed by an up-tempo, virtually breathless, instrumental medley of reels.

“Jealous of The Angels” is a very slow sad ballad about the unexpected loss of a loved one. I don’t know who wrote the song, but it was originally recorded by Donna Taggart of Celtic Woman (she may have written it) and is a stunning song that Nathan Carter positively nails

I didn’t know today would be our last
Or that I’d have to say goodbye to you so fast
I’m so numb, I can’t feel anymore
Prayin’ you’d just walk back through that door
And tell me that I was only dreamin’
You’re not really gone as long as I believe

Fortunately the mood brightens and the tempo picks up with of the most famous of Irish folk songs, “The Irish Rover”. Usually when I hear this song the audience, the performer or both are well lubricated (and they would need to be for the lyrics to make much sense). Usually too, the audience is singing along. Many will remember the song from the Pogues, but the song is much older than that. Nathan gives it a very exuberant treatment

In the year of our Lord, eighteen hundred and six,
We set sail from the Coal Quay of Cork
We were sailing away with a cargo of bricks
For the grand City Hall in New York
We’d an elegant craft, it was rigged ‘fore and aft
And how the trade winds drove her
She had twenty-three masts and she stood several blasts
And they called her the Irish Rover

We had sailed seven years when the measles broke out
And our ship lost her way in a fog
And the whole of the crew was reduced down to two
‘Twas myself and the captain’s old dog
Then the ship struck a rock, oh, Lord what a shock
And nearly tumbled over
Turned nine times around then the poor old dog was drowned
I’m the last of the Irish Rover

“The Town I Loved So Well” is a slow sentimental ballad. At six plus minutes, it could drag a little but the Nathan Carter vocal carries you along.

It’s back to high gear with “South Australia”, a popular folk song found in the English, Irish and Australian musical canons. Nathan starts it slowly then kicks it up.

The album closes with “Liverpool” a 2016 single and “Good Time Girls”. The latter shares the melody and most of the lyrics of the American folk song “Buffalo Girls”

Having only heard the video clips on the MKOC blog and a few snippets on Amazon, I wasn’t what to expect. Now I know that Nathan Carter is an excellent vocalist who can put on an outstanding live show. To fans of modern country music (such as it is) the linear resemblance to American country music is remote. To those of us who grew up thinking that Haggard, Jones, Snow, Tubb, Cline and Arnold are representative of country music, the line back to the Irish folk music is short and direct. While there are only traces of classic country instrumentation, the songs and the vocals make clear that connection.

With few exceptions, I really love this album and I can live with the few tracks that I don’t love.