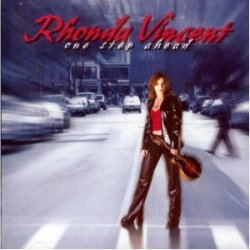 One Step Ahead was Rhonda’s 2003 release for Rounder and the first of her albums to really showcase her skills as a songwriter. As always, Rhonda is accompanied by a fine cast of supporting musicians including such aces as Aubrey Haynie (mandolin), Bryan Sutton (guitar), Ronnie Stewart (banjo), Stewart Duncan (fiddle) and brother Darrin Vincent (bass).

The album opens up with “Kentucky Borderline”, a fine breakdown composed by Ms Vincent and Terry Herd. You could describe this one as a train song in the finest tradition of Hank Snow, Jimmie Rodgers and Roy Acuff. The great vocal harmonies on this track are supplied by Jamie Dailey and brother Darrin.

“You Can’t Take It With You” is a gentle ballad from the pens of Curtis Wright and T.J. Knight about a love possibly about to disintegrate slowly.

This song was released as a single to radio, reaching #58.

“One Step Ahead of The Blues” is another Vincent & Herd composition, an up-tempo tune featuring Alison Krauss on harmony vocals. This song probably should have been released as a single. Instead it was the second song on a CD single of “If Heartaches Had Wings” (a song not on this album) released in 2004.

“Ridin’ The Red Line” is the song of a truck driver’s homecoming. Another Vincent/Herd composition, the song is noteworthy for the fine mandolin work by Aubrey Haynie with augmented mandolin fills by Cody Kilby.

Webb Pierce, June Hazelwood and Wayne Walker share the songwriting credits on an oldie, “Pathway of Teardrops”. This song has been recorded by many artists, but this version is very reminiscent of the Osborne Brothers recording of the song some years earlier.

The great female vocalist Melba Montgomery supplied “An Old Memory Found Its Way Back”. While Montgomery wasn’t a bluegrass artist, I’ve found that her songs lead themselves to bluegrass interpretations. This is a great ballad sung to perfection by Rhonda Vincent.

I don’t know much about Jennifer Strickland but she sure can write a pretty ballad, this one titled “Missouri Moon” about a love that has come to its end.

As I asked in a prior review, what would a bluegrass album be without a religious song? Much poorer for its absence, so Rhonda has chosen the old Stoney Cooper and Wilma Lee classic “Walking My Lord Up Calvary’s Hill. No version will ever replace the Stoney & Wilma Lee version in my heart, but Ms. Vincent’s version comes close, with Darrin Vincent contributing an excellent guitar solo and harmony vocals.

Another religious song follows, this one penned by Becky Buller, “Fishers Of Men”. This song is performed a cappella by Rhonda Vincent with Darrin Vincent, Mickey Harris and Eric Wilson providing the harmony vocals. This is my favorite track on the album.

Molly Cherryholmes composed the instrumental “Frankie Belle”, the only tune on the album to feature Rhonda’s own mandolin playing.

The album closes with a short rendition of “The Martha White Theme”, a tune long associated with Flatt & Scruggs, whose portion of the Grand Ole Opry was sponsored by Martha White for decades.

One Step Ahead is a very entertaining album and shows Rhonda as a fully realized artist. I’d give it an A. The strength of this album’s songs is demonstrated by the fact that six of these songs would be reprised in her very next album Ragin’ Live.

A year and a half after her triumphant return to bluegrass, Rhonda Vincent did the unthinkable and released an album that was actually better than 2000’s excellent Back Home Again. Like its predecessor, it is a collection of contemporary and traditional bluegrass songs, along with a handful of covers of country classics with acoustic arrangements. Slightly more traditional than Back Home Again, The Storm Still Rages was self-produced. Ronnie Light, who shared production duties on Back Home Again, acts as engineer this time around. Rhonda’s brother Darrin is once again in tow, playing bass and singing harmony. Also present are some of Nashville’s most prestigious musicians, including Stuart Duncan on fiddle, and Sonya Issacs and Alison Krauss whose harmonies are what really give this album an edge over Back Home Again.

By 2001, bluegrass was on a hot streak and the rising tide that lifted albums by Alison Krauss and the O, Brother Where Art Thou soundtrack to the top of the charts also benefited Rhonda, who had an album on the charts herself for the very first time. The Storm Still Rages reached #59 on Billboard’s Top Country Albums chart and #9 on their Top Bluegrass Albums chart.

In addition to her roles as lead singer, mandolin player and producer, Rhonda is also credited as a songwriter, having had a hand in creating three of the album’s songs — the opening track “Cry of the Whippoorwill” and “On Solid Ground”, which she co-wrote with Terry Herd, and “When The Angels Sing” which she co-wrote with Herd and her brother Darrin.

One of the album’s standout tracks is “Is The Grass Any Bluer”, which is a tribute to the late Bill Monroe. Addressing the father of bluegrass directly, Vincent asks:

My favorite song on the album is “Don’t Lie”, which had been a single for Trace Adkins two years earlier and ranks among his most underrated recordings. Rhonda’s version was also released as a single but it did not chart. The album produced two more non-charting singles, “I’m Not Over You” and a cover of the Hank Williams classic “My Sweet Love Ain’t Around”. Also among the country classics Rhonda covers is a version of the Jack Clement tune “Just Someone I Used To Know”, which was originally recorded by George Jones and is best remembered as a hit for Porter Wagoner and Dolly Parton. Rhonda’s version reminds me of the version Lee Ann Womack would record a few years later for her There’s More Where That Came From album.

Two gospel tunes are included in the set, the aforementioned “When Angels Sing” and “If You Don’t Love Your Neighbor You Don’t Love God”, a rousing toe-tapper that is probably the best known of Rhonda’s religious tunes.

The Storm Still Rages is one of those rare albums without a single misstep; the singing, playing, production and the songs themselves are all top-notch. Even if you think you don’t like bluegrass, give this one a listen and you may find that you’ve changed your mind.

The Cumberland Gap Connection is a little-known bluegrass band, but one who has given me a very pleasant surprise with this album (on Kindred Records). I understand it is their fourth, although it’s the first I’ve come across (thanks to a link posted on The 9513 a few weeks ago). The members hail from Kentucky and Tennessee, and the record was recorded in Cumberland Gap, Tennessee.

Usual lead singer Mike Bentley has an attractive smooth tenor voice, laid back style, and natural understated sense of phrasing, and is also a fine songwriter who was responsible for five of the album’s twelve tracks. He also plays guitar, and his talents provide the band’s focus and the core of the record’s appeal. My favorite of these (and one of the album’s highlights) is the dejected ‘Waiting At the Harbor’, a very well written song with some interesting imagery. One of life’s lost souls, the protagonist of this song has no idea of what to do with his life:

How can you find a home when you can’t move on?
Feels like I’m waiting at the harbor for a train

On a similar theme and almost as good is the opening track ‘Travel All Alone’, which reflects thoughtfully on regret for past choices leading to the loss of a loving home.

The high lonesome sound of ‘Ode To The Mountain Man’ is about a father teaching the protagonist “how to be a good man”, in a way which shows all those country living anthems they might just be missing the point:

I assume this is specifically about, and inspired by, Bentley’s late father, who died in 2006 and to whom he dedicates his work on the record.