Leave a comment Posted by Occasional Hope on August 4, 2016 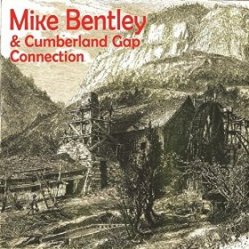 The bluegrass band Cumberland Gap Connection, now slightly rebranded by featuring the name of its lead singer and chief songwriter, and with an almost completely new lineup, has strong country influences behind the traditional bluegrass instrumentation. Bentley’s smooth lead vocal and a solid collection of songs make this album well worth tracking down.

‘Truck Drivin’ opens the album with a soulfully sung depiction of a truck driver’s life, as he heads home after a trip away. Bentley’s own ‘Coal Miner’s Dance’ offers a somber look at a miner’s dangerous life with a tragic culmination. The emotional ‘Chill Of A Late Frost’ (written by Shannon Slaughter) bewails the hard life of a farmer.

Slaughter also co-wrote (with Gerald Ellenburg) ‘Giving Up On You’, a sad song with a soothing melody which really suits Bentley’s voice. Nice harmonies, too, help to make this track a real winner.

The talented Bentley wrote four of the songs altogether. ‘Better Days’ is a fine song about a relationship on the edge. He teamed up with Terry Foust and Daniel Salyer to write the inspirational ‘He Knows My Name’, which is about a homeless ‘lost soul’ who nonetheless has inner peace. Together with Mark Brinkman they wrote ‘She Don’t Talk To The Moon’, another portrait in song, this one about an elderly woman with her feet on the ground and her heart set on heaven.

Terry Foust wrote ‘Back To Carolina’ with Ray Edwards; this picks up the pace with its optimistic tale of a an starting over by going back home. Also up-tempo, the good-humored ‘Old Steamboats And Trains’, written by Edwards and Larry Joe Cox, offers a travelogue. The upbeat ‘I Hear Kentucky Callin’ Me’ is very pretty.

Bentley is a big fan of the late great Keith Whitley, and he pays tribute here with a lovely version of the Lefty Frizzell classic Keith made his own, ‘I Never Go Round Mirrors’.

The record closes with an accappella hymn, ‘When I Make My Last Move’, sung solo by Bentley.

This is a highly enjoyable album, generally low key and mellow, centring on Bentley’s warm voice. It is recommended to anyone who likes the overlap between country and bluegrass.