Leave a comment Posted by Occasional Hope on November 4, 2014 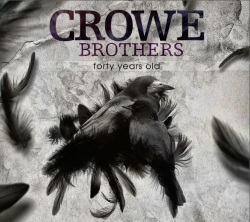 Straddling the boundaries between traditional country and bluegrass, the close sibling Louvin-style harmonies of Josh and Wayne Crowe are always worth hearing, especially as the duo have a penchant for picking great songs. Their latest album is no exception.

A number of country classics given bluegrass instrumentation include the opening ‘Lost Highway’, written by Leon Payne but best known from Hank Williams’ recording. the Crowe Brothers’ version is excellent. I also enjoyed ‘Excuse Me, I Think I’ve Got A Heartache’, which is suitably plaintive, with soaring fiddle. The romantic ‘Send Me The Pillow’ is also nicely done, while a bluegrass classic ‘Don’t Let Our Love Die’ is beautiful. The pleasantly philosophical ‘Someday My Ship Will Sail’ is less well known, but the Allen Reynolds tune has been recorded in the past by Emmylou Harris and Johnny Cash.

‘I’ve Got The Moon On My Side’ was written by Tom T Hall and wife Dixie with Troy Engle. It has been released as a single for bluegrass radio. It has a perky feel as the protagonist takes comfort in the country moonlight while his ex lives it up in town. The quirky ‘Livin’ In A Mobile Home’ was written by country songwriters Rory Michael Bourke and Ronny Scaife. It celebrates a life on the road in a Winnebago, and is entertaining and memorable.

‘Green Fields Of Erin’ is about the Irish emigrant experience and the longing for home.

The more-or-less title track ‘You Turned Forty Years Old’ is an old man’s fond tribute as his beloved son reaches a landmark age, written by Steve Watts. A charming lullaby rhythm and melody make this very memorable as the protagonist reminisces about his boy’s childhood.

‘Where Will You Be’ is a gospel tune written by Wayne Crowe and delivered with good cheer. ‘Angel Mother’ is an old fashioned (in a good way) pure bluegrass tribute to a mother. The set closes with the rapid-paced ‘Two Feet On The Floor’, which is typical up-tempo bluegrass. 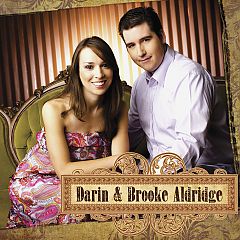 Husband and wife Darin and Brooke Aldridge style themselves the Sweethearts of Bluegrass and have recently released their second record together on the independent label Mountain Home. Recorded in North Carolina and produced by songwriter Jerry Salley (who contributes backing vocals on a number of tracks), there is a careful mixture of sacred and secular (but predominantly positive) material. The musicianship is exemplary, largely coming from the couple’s regular band (with Rob Ickes guesting on dobro on a few tracks). Multi-instrumentalist Darin plays guitar and mandolin, but the focus of the album is on wife Brooke.

She has a sweet, pure voice not dissimilar tonally to Rhonda Vincent, and a subtle interpretative ability. She takes the lead on the majority of the songs, including the charming mid-tempo opener ‘I Thought I’d Seen It All’, a positive travelog-cum-love song about the surprise love brings, written by Burton Collins and Lisa Shaffer.

Her voice has a more piercing quality on the pastoral ‘Corn’, also written by Shaffer, this time with Bill Whyte, about the joys of rural living and true love. Producer Salley and Donna Ulisse wrote ‘It Moves Me’, a thoughtful take on appreciating the beauties of nature, this time on the Gulf Coast “where I swear I can see God’s hand”. This is that rare thing, a beach song I can truthfully say I like.

The outstanding track is the religious ‘The Last Thing On His Mind’, a beautiful and moving reflection on Calvary, written by Dennis K Duff. The optimistic ‘The Light From Heaven’ (about hope), which precedes it, pales in comparison but Brooke sounds good. I really liked the pure bluegrass lament for a failing relationship, where she can’t make ‘Something Out Of Nothing’. This is the only sad-tinged song here, no doubt a reflection of their real-life relationship.

The pair both sing in close harmony with alternating solo lines on a delightful version of Kasey Chambers and Shane Nicholson’s ‘Sweetest Waste Of Time’. This couple’s version is sweeter sounding than the rawer original, although the arrangement is broadly similar (check this), and is one of my favorite tracks.

Their gorgeous close harmonies are also showcased on ‘Let’s Not Go There’, a pretty song written by Tom T Hall and his wife Dixie about not dwelling on past relationships or mistakes:

Listen to this live here.

‘Remind Me Again’ is another nice romantic duet, this time rekindling the flame of love in an established relationship, written by Jerry Salley (who sings harmony vocals on a number of tracks) and Tammi Kidd.