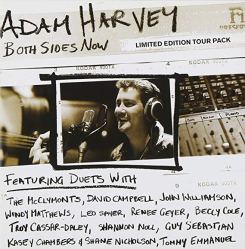 Released in 2009, Both Sides Now was Adam’s eighth studio album and second release for Sony Music Australia. Unlike Adam’s previous albums, which were more oriented toward traditional country music, this album featured a wide array of pop music with very little traditional country among the songs selected. Each of the songs also featured with guests mostly from the world of Australian pop music.

Frankly,I expected not to like this album, but I was pleasantly surprised how Adam brought a country feel to the non-country material. Moreover, the strategy of aiming toward the pop market must be adjudged a success as the album was Adams’s first to crack the top twenty albums chart, a place each of Adam’s subsequent albums reached. Plus, this is a pretty good album.

The album opens up with “Stuck In The Middle (With You)” a song composed by Gerry Rafferty and a major pop hit for Gerry’s group Stealer’s Wheel in 1973, becoming a major hit throughout the English- speaking world. Guy Sebastian, an Australian pop star appears with Adam on the song. The arrangement is rather more country sounding than the original hit although it features slide guitar and harmonoica rather than steel guitar.

“Easy” was a top ten pop hit for the R&B group the Commodores and was written by lead singer Lionel Richie. Adam is joined by Wendy Matthews, a pop singer from the 1980s. The rather bland arrangement is true to the original, but Adam’s deep baritone salvages the song.

“Move It On Over” is a humorous Hank Williams classic about an errant husband literally banished to the doghouse for his wayward behavior. Adam is joined by 1990s pop star David Campbell. This song is given a solid county arrangement.

Judy Collins had the big hit in 1968 with Joni Mitchell’s “Both Sides Now”. Adam is joined by the McClymont’s, a stunningly attractive trio of Australian pop-country singers. The arrangement is fairly true to the original, although a steel guitar can be heard gently playing in the background. This is a really nice track

“Down On The Corner” was a major pop hit penned by John Fogerty of Creedence Clearwater Revival. Although not specifically a country song, CCR’s swamp pop sound was embraced by country radio in 1969. I’m not sure why Leo Sayer was chosen for this recording, but it works. Sayer was a major British star during the period encompassing the disco era. He moved to Australia and became an Australian citizen in 2009.

“King of The Road” was Roger Miller’s signature song, performed her in somewhat doo-wop arrangement with really minimal instrumentation. Adam is accompanied by John Williamson, an Australian bush balladeer.

“It’s All Over Now” was written by R&B artists Bobby & Shirley Womack. Bobby’s version barely cracked the top hundred for his group the Valentinos, but when the Rolling Stones recorded the song, it soared to #1 in the UK with significant chart placements elsewhere. Adam is joined by Australian pop singer Shannon Noll. This would be a hard song to mess up and Adam & Shannon do a fine job with the song.

Adam is joined by Troy Cassar-Daley, a major Australian country star on the Willie Nelson-RayCharles duet of “Seven Spanish Angels”. The arrangement is true to the original and Adam & Troy handle the vocals with aplomb.

Webb Pierce had a major US county hit with “In The Jailhouse Now” holding down the #1 slot for twenty-one weeks in 1955. The song is far older than that with authorship claimed by the ‘Father of Country Music’ Jimmie Rodgers (1897-1933). It is a fun song with many variations in the lyrics. The arrangement reminds me of the one used by Red Knuckles & The Trailblazers (the alter-ego of the bluegrass band Hot Rize). Cool song with Kasey Chambers and Shane Nicholson joining in on the fun.

“Have I Told You Lately” is a Van Morrison blues -rocker with Adam joined by Renee Geyer, an Australian R&B/Jazz singer. Ms Geyer takes harmony on this recording, which has some steel guitar on it but is not otherwise very country.

Billy Edd Wheeler has written many fine songs with ”Jackson” being among the most famous. Adam is joined by Beccy Cole, a major Australian county star on this cover of the Nancy Sinatra & Lee Hazlewood (or Johnny Cash & June Carter if you prefer) duet.

If you don’t know of Tommy Emmanuel, here is your chance to hear him as he is the man playing guitar on this exquisite recording of Jerry Jeff Walker’s “Mr. Bojangles”. This may be the nicest track on the album – Adam sings it well, and if there is a better guitar player in the world than Tommy Emmanuel, I have yet to hear him (or her).