Leave a comment Posted by Occasional Hope on September 6, 2010 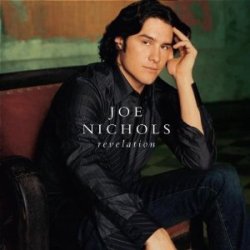 Joe’s second album, Revelation, was not quite as successful as its predecessor, but it has some great songs on it. Produced once more with taste and subtlety by guitarist Brent Rowan, the songs are mainly understated and a little downbeat, and those who like a lot of changes of pace may find this record disappointing. Personally, I think it rewards the time spent listening, and it is one of my favourite Joe Nichols albums.

The lead single, the earnest Harley Allen song ‘If Nobody Believed In You’, made the top 10. It ventures into both socio-political and religious territory as he moves from criticizing over-critical fathers stifling a child’s efforts and an adult son belittling his elderly father to raising the question of prayer in schools. Although it is a heavy handed lyrically, it is beautifully if a little languidly sung.

‘Things Like That (These Days)’, written by Byron Hill and Mike Dekle, tackles similar subject matter to rather gloomy effect. It tells of a boy with supportive parents who bring him up properly, and grow up to coach a children’s sport team, but the melody, while pretty, has a mournful feel, as Joe broods about those from less fortunate backgrounds:

Iris DeMent’s ‘No Time To Cry’, which also refers to the problems of modern society (murdered babies and bombs exploding), is outright depressing. The protagonist confesses wearily the sorrow brought to his life by bereavement, tears which he cannot afford to shed. It is beautifully sung and written, but undoubtedly ends the album on a downer.

In contrast, the second and last single was the cheery (and very short – not much more than two minutes) ‘What’s A Guy Gotta Do’, co-written by Joe himself with Kelley Lovelace and Don Sampson, which peaked at #4 early in 2005. The dateless protagonist wonders why he’s not getting any interest, when
Ask anybody, I’m a pretty good guy
And the looks-decent wagon didn’t pass me by

It may be fluff, but it has a self-deprecating charm which makes it endearing, and more importantly it is one of two bright up-tempo fun songs which lighten the mood , foreshadowing the way for Joe’s next big hit, ‘Tequila Makes her Clothes Fall Off’. The other is ‘Don’t Ruin It For The Rest Of Us’, recorded the same year a little more rowdily by June’s Spotlight Artist Mark Chesnutt.

The humble ‘Singer In A Band’ is written by Gary Harrison and Tim Mensy, as the protagonist gently chides his fans for idolizing him, comparing his life to the everyday struggles of others:

It verges on sentimentality, but the palpable sincerity, almost sadness, of the delivery makes it work.

END_OF_DOCUMENT_TOKEN_TO_BE_REPLACED

Texan singer-songwriter Deryl Dodd emerged in 1996 with his excellent One Ride In Vegas album on Columbia. He had a couple of top 40 hits, a cover of ‘That’s How I Got To Memphis’ and ‘A Bitter End’, before his career was derailed by serious illness. He never regained the lost momentum, and eventually lost his record deal after his third album for Columbia failed to produce any hit singles. He continued making music, and has released several albums on independent labels, of which the latest is Together Again, released by Smith Entertainment.

He has several advantages over other artists who have been cut loose by a major label: a strong, distinctive voice which marks out his material, and good songwriting ability which means he need not rely on seeking out more successful singers’ rejects from Music Row. He co-produced his 2004 album Stronger Proof (also recommended), but this is the first time he has tackled production duties on his own. He has done a capable job, I suspect on a tight budget, which is not obvious from the results. Deryl uses his road band throughout the sessions, bringing in outside musicians where required, and he plays acoustic guitar himself. The overall feel is modern Texas country, with the electric guitar quite strongly in evidence, but not overwhelming the material or Deryl’s compelling voice with its interesting inflections.

Deryl has written virtually all the songs, sometimes with other writers. They are pretty good on the whole, but there is no individual standout comparable to the finest moments on his previous albums. The best song is the title track, a sparkling cover of the Buck Owens classic where Deryl successfully combines a modern sound which is still respectful to the original. A very authentic Buck-influenced solo vocal, but lacking the characteristic harmony of the original, plays against a prominent electric guitar.