Album Review: The Mavericks – ‘In Time’

Leave a comment Posted by Occasional Hope on March 27, 2015 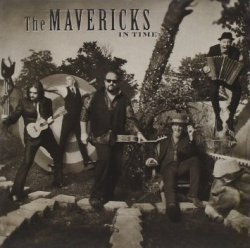 After almost a decade ploughing their individual furrows, the Mavericks reunited in 2012 and released a much-anticipated comeback early in 2013 on Valory Records. Arrangements are generally heavy on the horns, and the songs, all written or co-written by Raul, don’t quite stand up with the best of their earlier material, but it is a solid record filled with energised performances by a band clearly happy to be back together.

The lead single ‘Born To Be Blue’ is quite good, but didn’t crack the top 40 on the country airplay chart. The only other single, ‘Back In Your Arms Again’, a co-write with Gary Nicholson and Seth Walker, has a strong Latin influence, and didn’t chart at all.

‘Lies’ is an up-tempo country rocker, written with Al Anderson and Bob DipIero. It’s an excellent song lyrically, but lacks melody and the arrangement or mix is too loud and relentless. ‘Come Unto Me’, sung partly in Spanish, with a full-on Spanish version tacked on to the end of the record, incorporates Latin and rock aspects, and is pretty good. ‘As Long As There’s Loving Tonight’ and ‘Dance In The Moonlight’ are examples of the band’s feelgood party numbers – enjoyable and no doubt even more so live.

By far my favourite track, ‘In Another’s Arms’ is a tender ballad showcasing Raul’s voice at his soaring best and is tastefully produced. The languid ‘Forgive Me’ is another beautifully sung ballad.

‘Amsterdam Moon’ and ‘That’s Not My Name’ have a retro pop feel which is not my cup of tea, but well done. I enjoyed ‘Fall Apart’, which has a bouncy polka-style accordion-led accompaniment backing an unrepentant lyric about risking hurt for the sake of love. ’All Over Again’ has a similar joie de vivre, and a lyric about defying a helpless love for the woman who insists on breaking his heart repeatedly.

At over eight minutes, ‘Call Me When You Get To Heaven’ is far too long while not really getting anywhere interesting, and feels self-indulgent to me.

This isn’t a particularly country album, but is it is an enjoyable one which fans of the band should catch up on if they missed it.