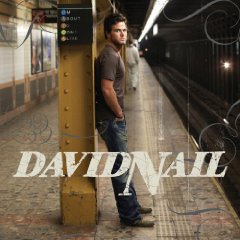 Missouri’s David Nail has been on the fringes of success for a while. He first saw chart action back in 2002, when his Mercury single ‘Memphis’ failed to gain traction, faltering outside the top 50, and David was unceremoniously dropped, leaving an unreleased album (produced by Alan Jackson’s producer Keith Stegall) to languish in the vaults. David gave up music for a while, but unlike many artists in his position, he was lucky enough to get a second chance when MCA signed him.

Unfortunately, I don’t like I’m About To Come Alive at all, for two reasons: the production (by Frank Liddell and Mike Wrucke), which is surprisingly heavy-handed, and David’s voice, which has a slightly nasal tone I just can’t warm to, as well as sounding highly processed at times. The overall feel of the album is Rascal Flatts meets James Otto, a comparison underlined by the presence of a song co-written by Gary LeVox, ‘Summer Job Days’, which sounds like a Rascal Flatts reject. This probably means David has a genuine shot at radio and sales success. He is currently basking in the success of his very first top 30 hit, ‘Red Light’. This is not a bad song (co-written, incidentally, by another up and coming artist, Jonathan Singleton), and I would probably like it in the hands of a more compelling vocalist. Sadly, I don’t feel an emotional connection in David’s version, or believe him when he sings about his world crashing down.

The album was originally due to be released this time last year, but was delayed when the lead single, the title track, failed to catch on with radio programmers. It’s a cover of an alt-rock song, and not a very interesting one, with no country elements I could detect in either the music or the production. Indeed, it is evident from the opening track, the pretty piano-led homesick ode to ‘Mississippi’ (which has one of David’s better vocals), that this is far from a traditional country record, and it stays in much the same vaguely soulful groove throughout. ‘Mississippi’ is written by Scooter Carusoe, David Colehour and Chuck Leavall.

Carusoe seems to be a favorite writer for David, and the pair collaborated on two songs here, of which ‘Again’, a nostalgic look back at youth, is the better. ‘Clouds’ was less interesting. Carusoe also wrote ‘Turning Home’ with Kenny Chesney; this one starts out as a pleasant ballad with piano-dominated backing, with one of David’s more emotionally convincing vocals, but halfway through the production gets out of hand and completely overwhelms the song.