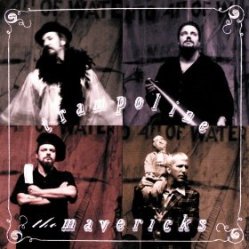 The Mavericks’ fifth studio album, Trampoline was their most successful album globally, not reaching only #9 on the US country chart, but unlike any of their other albums, before or after, also having significant success  in other countries. The album reached #3 on the Canadian country charts, #43 on the Canadian pop charts, #10 on the British and New Zealand pop charts and charting on the album charts of Norway, Sweden and the Netherlands.

This was fueled by the success of “Dance The Night Away”, which while not a big hit on the US or Canadian country charts, reached #4 on the British pop chart, #25 in the Netherlands. Another British single from the album, “I’ve Got This Feeling” also cracked the top thirty.

As time went on, The Mavericks’ albums focused less on the band as a whole, and more on lead singer Raul Malo. I suppose this was inevitable, given the unique vocal talents of Malo, and this album completed that progression. Less country than its predecessors, Trampoline seamlessly blends together all of Malo’s musical influences. Of the albums thirteen songs, Malo either wrote or co-wrote twelve, the only exception being “I Hope You Want Me Too” from the pens of “Big” Kenny Alphin and Jaime Hanna.

Some of the songs feature a lot of musicians. In addition to the band members, twenty-one other musicians plus the Nashville String Machine play on the album. This includes a full complement of horns and reeds., as well as banjo and steel guitar.

The album opens up with the Latin-flavored “Dance The Night Away”, which while not an across the board hit on the US country charts (#63 US country  / #72 Canada country) received huge radio airplay in Florida (and I suspect other markets with large Latino populations).  The song is about what the singer is doing since his girl left him.

“Tell Me Why” , co-written with Al Anderson, has a strong 70s soul/ R&B ballad flavor to it  This is followed by the Latin-tinged “I Should Know” which despite the horns and steel guitars sounds like something from one of the British invasion bands of the 1960s

“Someone Should Tell Her”, also co-written with Al Anderson, didn’t chart on the US and I am not sure that it was released as a single here. It was a single in the United Kingdom, reaching #45 and is probably my favorite song on the album.

“To Be With You” is a nice country love ballad, devoid of Latin flavoring that would likely have been a hit had it been issued during the period from 1965- 1985. The Nashville String Machine is prominently featured on this track.

The next track is a bluesy curve ball, the languid “Fool #1” , which sounds like something you might hear on a modern (but not too modern) jazz album or perhaps in some cocktail lounge somewhere, except Malo is a better singer than anyone you would likely hear in such a setting. The Nashville String Machine is tastefully employed in service of this song.

“I Don’t Even Know Her Name” also sounds like British Invasion pop, which may explain why it was issued as a single in the UK , reaching #27. On this song, Malo dials down his vocals a bit to sound more like a typical British invasion vocalist.

All in all this is a very interesting album flitting from genre to genre and reflecting a wide array of influences. I’ve pretty much covered the highlights of the album, but the entire album is worth hearing.  “Melbourne Mambo” probably comes closest to the sound of Malo’s Cuban heritage. Really , the only misstep is “Dolores”, which has a 1890s sound (piano and clarinet are the dominant instruments) with Malo singing into a megaphone – shades of “Winchester Cathedral” by The New Vaudeville Band of the 1960s, or earlier still, Rudy Vallee in the late 1920s/early 1930s. The track is not terrible but it is a waste of Malo’s unique voice.

The two closing tracks “Save A Prayer” which has that tent-revival sound and feel to it, and “Dream River” which has the feel of a Pat Boone or Elvis Presley ballad from the 1950s.

I really like this album and would give it an A+ but as what ?

Classifications can be so meaningless. Just sit back and enjoy the album !