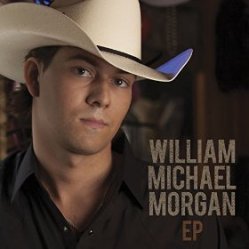 Occasionally my faith in the future of mainstream country music is revived. That’s when an artist like William Michael Morgan emerges, signed to a major label (in this case Warner Brothers). When Razor X reviewed his debut single ‘I Met A Girl’ last year he praised Morgan’s song and country credentials, while noting, correctly, that the song was ‘generic and unmemorable’. It is saved by Morgan’s voice, which has tonal echoes of Keith Whitley, and his tender commitment to the song which makes it quite convincing. The single is slowly making its way up the chart, and has sold over 30,000 downleads, prompting Warner Brothers to issue this six-track EP, which gives us the chance to hear how he stands as an artist beyond that one song.

I was concerned when the record opened with the love song ‘Vinyl, which is similarly pleasant but underwhelming, and suffers from too many repeats of the word ‘girl’. It was written by Wade Kirby, Ashley Gorley, and Carson Chamberlain. ‘Beer Drinker’ (written by Wynn Varble, David Lee and Don Poythress ) raises the tempo a little, and is bearable potential radio fodder but a little dittyish and over-produced, at least by the standards of this record. None of these songs is bad, just not likely to set the world on fire.

But the second half of the set is much more like it. ‘Lonesomeville’ is an excellent sad song written by Morgan with Mark Sherrill, Ash Underwood, and former Lyric Street artist Trent Tomlinson, A steel guitar dominates the arrangement, complementing Morgan’s classic country vocal.

Just as good, the plaintive ‘Cheap Cologne’ has the protagonist sleeplessly fretting over the too-obvious signs of his wife’s infidelity:

But tonight she’s in for a surprise as he plans to be gone before she gets home. This song was written by Jimmy Ritchey, Odie Blackmon and another ex-Lyric Street performer who sadly never quite made it, Kevin Denney. (Incidentally I understand Denney is planning on releasing new music himself in the near future.)

Finally, the valedictory ‘Back Street Driver’ (written by Robert Counts, Nicolette Hayford, and Matt Willis) is a father’s good luck message for a departing son starting out on his new life:

The only disturbing note is that he feels the need to pack a baseball bat in the back.

This is a very promising debut from an artist I very much hope to hear more from.