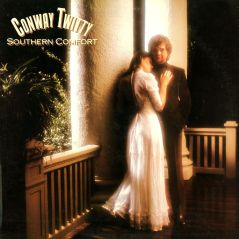 By the dawn of the 1980s, Conway Twitty had collected 23 solo number one singles and another five from duets with Loretta Lynn. Changes were afloat in the new decade, the least of which was a tweak in appearance, from his trademark pompadour hairstyle to the head of curls that would carry him through until his death in 1993.

Twitty parted ways with Decca/MCA Records after fifteen years with the label in 1981. He would release his next two albums on Eleketra, a move that would continue his success and allow Twitty to venture into new realms of his career. His first release for the label, Southern Comfort, would give him two more chart-topping singles. The album was produced by Jimmy Bowen.

The first single, “The Clown” was a slow and prodding ballad, typical of the period, with zero country signifiers. The follow-up, “Slow Hand” had been a big hit for The Pointer Sisters a year earlier. “Boy Next Door,” “Love And Only Love” and “It Turns Me Inside Out” are more of the same mid-paced to slow warmed over balladry.

“When Love Was Something Else” is an excellent change of pace, with twangy guitar added into the mix and noticeable effort to resemble country music. “She Only Meant to Use Him” employed the same techniques for another winning number. “Something Strange Got Into Her Last Night” continues the upward trend and could’ve easily been right at home under the care of Ronnie Milsap. “I Was The First” has an engaging melody I really enjoyed. The title track is an awful throwaway, with a cheesy lyric and intrusive background vocalists.

Despite the two singles, which Conway Twitty pursuits consider low points in his catalog, all hope is not lost with Southern Comfort. The majority of songs on the album are good and engaging, but not earth-shattering or remarkable. I wouldn’t rush to seek out a copy, the album can be easily streamed on YouTube, but it’s better than the singles and album cover would suggest.