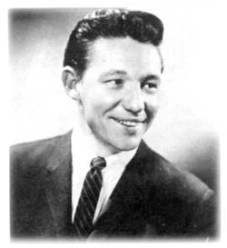 “Because you see, we live what we sing. Or, put another way, we sing what we live In telling things as they are, in being what we are, we are true to our ‘raising’ – to the small town and rural American values we take for granted . These values are heavily religious, but they are also heavily patriotic. They are highly moral, but they are also very human … It reflects life as life is lived. But we are not deceived into thinking that it is right.”

Bobby Lord was a genuine country music star in his time, one whose career could not duplicated in today’s environment.

Consider this: Columbia issued 18 singles on Bobby Lord without ever releasing an album. Of these singles, only his seventh, “Without Your Love,” released in 1956, charted on Billboard’s Country Chart (reaching #10), though most of them sold very well in the South, with several becoming huge sellers. Since the charts prior to 1958 went only 15-20 places deep and Lord’s records were selling only regionally, it’s not surprising that they didn’t chart. Despite this, several of the records sold over 250,000 copies, with “Hawkeye” (written by Boudleaux Bryant) being the biggest hit, although “Swamp Fox” and “Pie Peachy Pie” are also well remembered–all of Lord’s Columbia singles fetch high prices from collectors.

Bobby Lord was born in Sanford, Florida (between Orlando and Daytona Beach) but grew up in the Tampa area where he began his career as a teenager. While a freshman at the University of Tampa, he starred in his own television show, The Bobby Lord Homefolks Show, which ran for an hour on Saturday nights. From there he landed a guest appearance on Paul Whiteman’s TV show in New York. For those not familiar with Whiteman, he was the biggest recording star of the 1920s, from whose band such future stars as Bing Crosby, Jack Teagarden, Bix Beiderbeck and Tommy Dorsey emerged.

In 1953, songwriter Boudleaux Bryant gave an assist to Lord’s career by playing a tape of his recordings for Don Law at Columbia records, who signed Lord to the label. As mentioned previously, Lord recorded several regional hits in both the rockabilly and country idioms. At the same time, he became a regular on The Ozark Jubilee (ABC television show starring Red Foley, based out of Springfield, Missouri), where he stayed for five and a half years. Lord also made his first guest appearance on the Grand Ole Opry in 1954 and appeared occasionally thereafter.

The Ozark Jubilee went off the air in 1960, so Bobby Lord moved to Nashville, joining the Grand Ole Opry that same year, where he remained active until the mid 70s. In 1961 he began recording for the Hickory label, where he had his first National hit in eight years with “Life Can Have Meaning”. In 1967, he moved to Decca, where had seven charted hits, with the biggest being “You and Me Against The World” (not the same song as the Helen Reddy hit) and “Wake Me Up Early In The Morning”. While with Decca, Lord released one album, and during this period he hosted the nationally syndicated Bobby Lord Show, which was seen in 40 markets in the U.S. and 34 countries around the world. He also had a late afternoon live country TV show on WSMV

After his Decca contract expired, Bobby Lord more or less retired from the music business, returning to his native Florida to sell real estate. When The Nashville Network (TNN) came into being, he hosted Country Sportsman (later called Celebrity Outdoors) and made occasional guest appearances on other TNN shows. After 1990 Lord was largely retired from show business.

Bobby Lord was a deeply religious man, and his 1969 book Hit The Glory Road remains as fascinating to read today as it was when first published. The book includes interviews with such notables as Roy Acuff, Bill Anderson, Boudleaux & Felice Bryant, Skeeter Davis, Jake Hess and Tex Ritter, discussing their concepts of religion, morality and country music, as well as relaying a number of truly funny stories. END_OF_DOCUMENT_TOKEN_TO_BE_REPLACED