During the 1960s and 1970s it was not uncommon for the various branches of the US Military to put together fifteen or thirty minute radio shows for use on country radio stations. Mostly these shows aired on smaller radio stations, usually in air slots where it was difficult for them to sell advertising. Some of these shows, such as Country Music Time (a recruiting tool for the US Air Force) and Country Cooking With Lee Arnold (a recruiting program for the Army Reserves) featured some chatter with the weeks’ musical guests followed by some recordings by the musical guest. Others, such as Navy Hoedown, featured chatter with the featured artist playing with the program’s band.

Waylon Jennings – The Lost Tapes comes from recordings made for an unspecified military recruiter program. The recordings were made at Scotty Moore’s Music City Recorders on July 13, 1970. They have not been commercially available before now.

The songs featured here are songs from the first half dozen years of Waylon’s career with RCA. In other words, these songs pre-date the “Outlaw” movement. The revelation here is that most of these songs were originally recorded with the heavily produced strings and chorus-laden production of the time, but here they are featured without those trappings. As such, this is a real treat for his fans.

Originally recorded, on a rush basis, with members of Waylon’s band, the tracks had problems with the bass and drums, so the tapes were turned over to Robby Turner, a former member of Waylon’s band for post-production work and overdubbing. Robby Turner overdubbed steel guitar, keyboards and dobro; Paul Martin played the bass parts and the drum kit; and Paul Martin, his wife Jamie, Robby Turner and Colene Walters adding vocal harmonies. Waylon plays guitar on the recordings.

The end result is early Waylon songs that sound almost as if they had been released during the ‘New Traditionalist’ era. The song list is as follows:

I picked up my copy at Cracker Barrel. The songs were all familiar to me but I really enjoyed hearing the frequently less orchestrated versions on this disc. Bass and drums are a little loud so I give this a B+, but the concept is definitely worthwhile, and more modern listeners than I likely will give this an A. 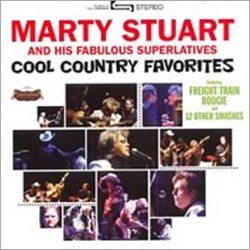 After 2003’s Country Music, the major label phase of Marty Stuart’s career ended.  He began to release music on his own Superlative label (initially in conjunction with Universal South),  and issued a pair of critically acclaimed concept albums, followed by a duets compilation and a live album recorded at the Ryman Auditorium.  2008’s Cool Country Favorites is a transition album that serves as a gateway to the traditional sounding music he is making today.

As the title suggests, Cool Country Favorites is a tribute to country music,  with bluegrass, rockabilly,  and traditional country all represented.  It contains a number of covers of country and folk standards,  Marty’s take on classics by Johnny Cash (“Big River”) and George Jones (“Old, Old House”), and some instrumentals such as “La Tingo Tango” (the theme song to Marty’s RFD-TV show) and “Buckaroo”.   He even takes a back seat on a couple of tracks and allows his Fabulous Superlatives to shine.  “The Apostle” Paul Martin sings the lead vocals on “Bluegrass Express” and Harry Stinson sings on a very nice bluegrass version of Woody Guthrie’s “Pretty Boy Floyd”.   “Carol Lee” sounds like a 1950s Chuck Berry tune, but it was actually written and performed by “Cousin” Kenny Vaughan.

A number of the songs on the album appear elsewhere in Stuart’s discography.  Both Porter Wagoner’s “A Satisfied Mind” and “Sundown In Nashville” appeared on 2003’s Country Music.  The latter would be remade again for Marty’s current album.  “Truck Drivin’ Blues”,  on which Marty name-checks his wife Connie Smith, is one of only two Stuart-penned songs on the album.  It too was remade for his latest release.

The album’s two standout tracks are Marty’s rendition of the George Jones classic “Old, Old House”, and the hauntingly beautiful, stripped-down “Dark Bird”, which Marty wrote as a tribute to Johnny Cash.  It closes the album on a quiet, thoughtful, and beautiful note.

Unfortunately and surprisingly, Cool Country Favorites is difficult to find.  It is unavailable digitally and I was unable to find any new or used copies on Amazon.  As such, it is in danger of being forgotten.  If you do manage to locate a copy at a reasonable price, grab it.