Album Review: Diamond Rio – ‘I Made It’

It has been several years since Diamond Rio were last in the studio, and more since they made a country record (their last effort was a Christian Contemporary effort which lacked the band’s signature harmonies). Their self-released return was an unexpected surprise.

Unfortunately, a couple of songs in, I was wondering if they had lost the plot completely. The opening ‘I Love This Song’ is a piece of mid-tempo fluff which would be bearable if forgettable, but is marred by bizarre vocal interjections; it was previously an unsuccessful single for its co-writer Marcel. ‘Ride The Range’ is a weird self-indulgent experimental melange; it has country instrumentation, but does not sound country structurally or melodically , with semi-spoken vocals and a rudimentary lyric. I strongly disliked it, and scheduling the record’s worst songs at the start unbalances it as a whole. Luckily, things improve.

The pop-country ‘Crazy Life’ is not very interesting, despite a perky arrangement, with oddly syncopated vocals. ‘Lay Your Lovin’ On Me’ has a similar bouncy feel but is much catchier and more entertaining, and I rather enjoyed it.

The title track is much better. Co-written by band member and album producer Jimmy Olander with Josh Shilling and Michael Dulaney, it is a charming ballad reminiscing about Olander’s arrival in Nashville as an aspiring musician, which turns half way through into an AC-leaning love song to his wife. The romantic ‘I Can’t Think Of Anything But You’ (a Skip Ewing co-write) is a cover of a song formerly recorded as a duet by Sammy Kershaw and Lorrie Morgan, and is quite nicely done.

The album’s outstanding song does see the group back at their best. ‘Beckett’s Back Forty Acres’ is a delightful story song with an acoustic arrangement, about a local farmer who makes it big by a secret (and illegal) crop – but eventually gets hauled away by the police. Ashley Gorley, Michael Rossi and Hugh Bryan Simpson wrote the song, and this track is well worth downloading.

The love song ‘If You’re Willing’ is typical Diamond Rio mid-tempo fare, an enjoyable track written by Jason Sellers and Stewart Harris. ‘I’ll Wait For You’ is also quite attractive.

‘Findin’ My Way Back Home’ was the single released from Lee Ann Womack’s ‘lost’ unreleased album in 2006. LAW’s version of the Craig Wiseman/Chris Stapleton song had something of an Americana-meets-pop feel to it which didn’t really work. The Diamond Rio version is a bit more more organic, and more successful.

The beautiful ‘Walking By Beauty’, written by Patrick Jason Matthews and Jason White, was inspired by an experiment undertaken in 2007 by acclaimed classical violinist Joshua Bell, when he busked in a Washington DC Metro station to see who would pay attention. Bell guests on the track, whose profits are devoted to the doTerra Healing Hands Foundation.

This is definitely a mixed bag, but on the whole the good outweighs the bad. 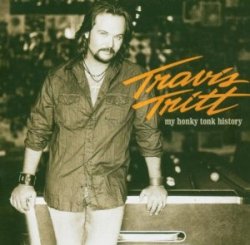 The creative renaissance that Travis Tritt enjoyed with the release of Down The Road I Go was unfortunately short-lived; 2002’s Strong Enough was a commercial and critical disappointment and 2004’s My Honky Tonk History, while slightly better than its predecessor, was likewise a mixed bag.

Based on the album’s title, some fans might have been expecting a back-to-basics collection of traditional weepers; if so, those fans were likely quite disappointed, since the album often is anything but traditional. Ironically, the Luke Bryan and Patrick Jason Matthews title track is one of the most rock-leaning tracks Tritt ever released. The track’s production is rather heavy-handed, and this is also the case with the second track “Too Far To Turn Around”. Two tracks into the album I was bracing myself for a tedious listening experience; “The Girl’s Gone Wild” is more mainstream contemporary country but the lyrics are cliched and the whole song sounds like a retread of the Garth Brooks Hit “Ain’t Comin’ Home Til The Sun Comes Up”; a song of which I was never overly fond. The tune seems to have been carefully tailored to the prevailing tastes at country radio, but radio’s response was lukewarm and the tune topped out at #28.

Fortunately things take a turn for the better starting with the fourth track “What Say You”, a duet with John Mellencamp. It’s not a traditional number by any means; it is more in the vein of something that Bob Dylan or The Byrds might have recorded. I’ve never been a fan of Mellencamp’s music but somehow the tune manages to work. It marks Mellencamp’s first –and to my knowledge, only — entry into the country Top 40. The record just missed the Top 20, peaking at #21.

Following “What Say You” is the excellent “Circus Leaving Town”, a traditional steel-guitar drenched number which is by far the album’s best track. “Monkey Around”, a bluesy number written by Delbert McClinton, Benmont Tench, and Gary Nicholson provides a nice change of pace, and Tritt sounds as though he is thoroughly enjoying himself with this tune. “I See Me” is a more mainstream effort, a ballad about a father observing his young son. Earlier in Tritt’s career, this would likely have been a big hit but by this time radio had cooled toward him considerably and the record stalled at #32.

By the last third of the album, the quality begins to taper off again, as the songs become more rock-oriented with offerings like “When Good Ol’ Boys Go Bad”, the anti-commercialism anthem “It’s All About The Money” and the don’t-get-above-your-raisin’ themed “When In Rome”, which closes the album. The two exceptions are the beautiful ballad “We’ve Had It All”, a Tritt co-write with Marty Stuart and “Small Doses” written by Jerry Salley and Chris Stapleton who would later enjoy a stint as lead vocalist for The SteelDrivers. “Small Doses” is the one tune here that sounds as though it belongs on an album titled My Honky Tonk History.

Though it failed to spawn any major hits or earn gold or platinum certification, My Honky Tonk History did reach #7 on the Billboard Top Country Albums chart. His declining popularity with radio and creative differences with Columbia led to Travis’ departure from the label in 2005. With the major label phase of his career now over, he went on to experience even greater difficulties with the independent Category 5, with whom he signed in 2006. Uneven in quality though it is, My Honky Tonk History does contain a few very good tracks and for those alone it is worth picking up a cheap copy.

2001’s Chrome helped Trace Adkins out of a commercial slump, somewhat at the expense of his artistic integrity. His fifth release, 2003’s Comin’ On Strong, follows in a similar vein, moving him further away from his traditional roots and towards more lightweight, less serious fare. Although the strategy had the desired effect of getting Trace back on the radio, it eventually did considerable harm to his credibility as an artist. That’s not to say that there’s nothing to like here; much like its predecessor, Comin’ On Strong is very much a mixed bag.

The first single release was “Hot Mama”, which like “Chrome”, is a beat-driven, lyrically shallow number that does little to challenge the listener. To be fair, “Hot Mama” is a much better song than “Chrome”, but it’s far from Trace’s best and it’s easy to see that he had already started down that slippery slope that reached its nadir with the excerable “Honkytonk Badonkadonk” two years later. “Hot Mama” did quite well at radio, returning Trace to the Top 5 for the first time since 1997’s “The Rest of Mine”. The second single was the good ol’ boy attitude song “Rough and Ready”, which is somewhat catchy, particularly coming at the tail end of an album comprised mostly of mid-tempo ballads. However, it loses its appeal after repeated listenings. It failed to crack the Top 10, petering out at #13. Despite its failure to reach the Top 10, “Rough and Ready” sold enough downloads to become Trace’s first gold-certified single.

After “Rough and Ready” finished it run on the charts, no further singles were released, despite the presence of some worthy candidates. “I’d Sure Hate To Break Down Here” was surely a missed opportunity; a few months later newcomer Julie Roberts released it as her debut single and took it to #18. Although arguably the song is more effective when sung from the female point of view, I prefer Trace’s version and believe that as a more established artist, he could have taken this one into the Top 10. It’s by far the best song on the album. The title track is also one of the better songs on the album. Though not very deep lyrically, it’s one of the more country sounding tracks in the collection, which was a bit surprising because the title implies a more rock-oriented tune. Instead, the rock is provided by the overproduced “One of Those Nights”, which along with the equally overproduced “Missin’ You”, is among the weakest songs on the album.

The rest of the album is mostly forgettable, middle-of-the-road filler that is sometimes marred by the heavy-handed production of Trey Bruce and Scott Hendricks. I’ll give points to “One Nightstand” for trying to be a little creative. In this tune, written by Patrick Jason Matthews and Trey Bruce, Adkins is a husband who has strayed and got caught. At the song’s climax, he is on the bed with a Bible in one hand and a gun in the other — “One of them was gonna save me,” he sings, “the only question was which one.” On the surface, it has all the makings of the perfect country song, but the melody is not very interesting, and the use of the “One Nightstand”, which refers to both his illicit affair, and a table in his seedy rented room, seems very forced and just does not work. Ultimately deciding against taking his own life, he sings, “Funny how a man’s life can all come down to one nightstand.” It seems odd to give credit for the decision to the piece of furniture and not its contents — his wedding ring and a photograph of his family.

Despite having produced only one Top 10 hit, Comin’ On Strong was certified platinum, exceeding the sales of its gold-certified predecessor. With the exception of “I’d Sure Hate To Break Down Here”, there’s nothing here that’s really essential listening, but cheap new and used copies are readily available from third party sellers at Amazon. At a reduced price, it’s worth adding to your collection.