Leave a comment Posted by Occasional Hope on May 23, 2017

The Zac Brown Band, always eclectic, took that spirit rather too far in their last, terrible, album. Evidently chastened by fans’ lack of enthusiasm for their new direction, they have returned to more organic (though not necessarily paticularly country) sounds on their latest release, their first for Elektra. They have turned to Dave Cobb to produce the album.

The overarching theme is one of home, and family, a mood set by the charming lead single, ‘My Old Man’. A touching tribute to Zac’s late father set to a gentle melody, this is a true delight. The piano-led ‘Real Thing’ is also very good, with a nostalgic look back to a father or grandfather who teaches Zac you can’t substitute for the best, a lesson which he applies to other things in life. (Coca cola, most associated with the title phrase, is not mentioned by name, but the band’s Atlanta background makes it an inescapable point of reference – if Zac’s lucky he might get this picked up for a commercial; if he’s unlucky he could get sued.)

‘Family Table’ is a fond ode to a welcoming home, which I liked. ‘2 Places At 1 Time’ is about the competing lures of home and away, and is a nicely delivered wistful ballad. ‘Long Haul’ is quite pleasant but a little forgettable, with a 70s country-rock-AC ballad feel.

All but one of the songs were composed by the writing team of Brown, Niko Moon and Ben Simonetti, with occasional outside help, not necessarily for the better. Indeed, it is with the co-writes that the album gets off course. Band member Coy Bowles co-wrote the opening tune, ‘Roots’. This is a good but ironically slightly over produced big ballad about the lure of music and a musician’s life. ‘Start Over’, co-written with rapper/producer Pharrell, is one of the band’s signature Caribbean styled tunes, which (although not really my cup of tea) is quite well suited to the lyric (about getting away to the beach as a way of reconnecting with an ex). Some introductory yelping, however, should definitely have been dispensed with – it sets my teeth on edge every time I hear it.

‘Your Majesty’ is a pretty love song, written by the guys with Kenny Habul (an Australian race car driver and solar power entrepreneur, who was mixed up in Zac Brown’s 2016 drugs bust), marred by slightly annoying production, particularly annoying ah-oh interjections. Aslyn, a female pop singer-songwriter from Atlanta with a powerful voice, co-wrote and duets on rock ballad ‘Trying To Drive’. The song is nothing special and not country at all), and the production too heavy, but the vocals are strong in their own style.

The album closes with a fine cover of John Prine’s ‘All The Best’, a pained and subtly bitter farewell to a former love:

I knew love
Oh, love knew me
When I walked around
Love walked with me
But I got no hate
And I got no pride
Well I got
So much love
That I cannot hide

This is a definite highlight.

This is less of a return to form than I had hoped, and there are few standout moments other than ‘My Old Man’ and ‘All The Best’. Those two tunes are definitely worth downloading, and the whole thing is probably worth checking out if you’re a fan. There is also not much variation in tempo. One cannot help wondering if the band’s hearts are really elsewhere. 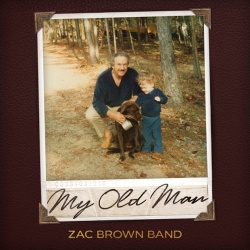 The Zac Brown Band have always maintained that they are not a strictly country band; however, they they have been one of the few (mostly) bright spots at country radio over the past decade.  With the release of the polarizing Jekyll + Hyde album, they ventured into the world of EDM and reggae.  It didn’t seem to hurt them commercially but it did alienate many of their fans.  The Band now seems to be extending an olive branch to those fans with their new release, “My Old Man”.

Written by Zac Brown with Niko Moon and Ben Simonetti, “My Old Man” is the latest in country music’s long-standing tradition of honoring one’s parents.  It channels old chestnuts as “Coal Miner’s Daughter”, “Daddy’s Hands”, “That’s My Job” and “Love Without End, Amen” and delivers essentially the same message as those classic songs.  While it doesn’t break any new ground, it does take the initial steps needed to get country music in general – and the Zac Brown Band in particular – back on track artistically.

A sparsely arranged ballad consisting of acoustic guitar, a little fiddle, a subtle string arrangement and the Band’s trademark harmonies, “My Old Man” opens with the narrator’s boyhood reminiscences of his father.  In the second verse, the narrator is grown with a son of his own.  The third verse reveals that the narrator’s father has passed away.  The narrator expresses hope that he can live up to the example that was set for him, and looks forward to an eventual reunion with his father in the afterlife.

“My Old Man” was produced by Dave Cobb, best known for his work with Chris Stapleton, Jason Isbell and Sturgill Simpson.  It’s the refreshing glass of water that  fans have been crying out for during a long drought in the bro-country desert.  I look forward to hearing the Band’s forthcoming album.

Since debuting eight years ago, Zac Brown Band has been a bright light on the increasingly barren landscape of mainstream country music. Ballads “Highway 20 Ride,” “Colder Weather” and “Goodbye In Your Eyes” join rompers “As She’s Walking Away” and “The Wind” as some of the strongest radio singles of the period. I’ve always loved Brown’s affable voice and his instance that fiddle prominently factor into the core of his band’s harmonic sound.

Still, the need for change has always been there. Zac Brown Band is quick to grow complacent, retreading musical ground when they should be pushing to elevate to the next level artistically. Uncaged, for example, beat their island-themed subset into the ground with the ear piercing “Jump Right In.”

Like clockwork, they’ve managed to do it again. Jekyll + Hyde is their widest album yet stylistically, covering everything from EDM and rock to jam band and, yes, more of those island rhythms. In turn, it mixes a hodge-podge of everything with a lot of retreaded ground.

The album opens with the wailing “Beautiful Drug,” which attempts to cross-pollinate by mixing EDM with acoustic country instrumentation. They venture into acid rock on the disastrous second single (it was a #1 on the Billboard Rock Chart) “Heavy Is The Head,” which features an assist from Soundgarden lead vocalist Chris Cornell. They further hone this sound on “Junkyard,” another slice of head pounding acid drivel.

Lead single “Homegrown,” while not a complete misstep, is the worst song they’ve ever sent to country radio. The suffocating production, complete with harmonies lifted from Eagles “The Long Run,” is only compounded by a lyric that’s too rudimentary to be interesting. Brown, Niko Moon, and Al Anderson ingeniously give third single “Loving You Easy” a catchy chorus to distract from the fact the song is nothing more than blandly warmed-over 1970s soft rock, a slower sonic counterpart to “Keep Me In Mind.” The jam band aesthetic continues on groovy love songs “One Day” and “Young and Wild.”

Brown employs a hoard of songwriters, a tradition in modern pop music, to help with two of the album’s tracks. “Wildfire,” which is co-written with Eric Church, follows in the same musical vein as “Homegrown” and feels primed to be a single. “I’ll Be Your Man (Song for a Daughter),” presumably written from Brown’s personal experience (he has four of them), explores a pop-leaning waltzing style complete with staccato beats.

The resurrection of their island-theme signature comes in the form of “Castaway.” A breezy ukulele and steel drum soaked jam that continues the escapism of “Knee Deep,” the song beautifully evokes the intended feeling in a way that feels somewhat fresh yet cheesy at the same time. They go a step further by fully exploring horn-laden Swing on “Mango Tree,” a duet with pop vocalist Sara Bareilles. The upbeat jazzy grove fits Brown like a glove, which surprised even me.

The remainder of the album showcases how Zac Brown Band fares when they revisit what they’ve already done musically, but with fresh eyes. Life affirming “Remedy” preaches love as the answer with ribbons of Celtic influence. Discourse continues on “Tomorrow Never Comes,” a bluegrass romp delivering the same central message as the Garth Brooks classic. “Bittersweet” tells a dark tale about lost love with a melody that recalls, but adds a bit more meat to, their penchant for tracks with a delicate acoustic softness.

The Jason Isbell composition “Dress Blues” is easily the album’s most hyped moment, a rare instance where a mainstream artist uses their platform to elevate the stature an independent singer/songwriter. The proceedings are marred by a production that favors slick over raw, but it doesn’t hinder the overall beauty of the song, which features harmonies by Jewel. It says a lot about the quality of an album when its strongest track comes courtesy of an outside songwriter. 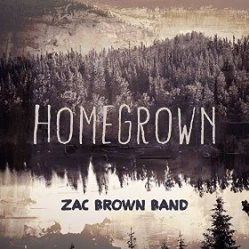 Even though their music is not always strictly country, the Zac Brown Band has been one of the few bright spots at country radio in recent years. Much of their music to date has been a hybrid of country and the type of pop played on Top 40 radio stations back in the 70s. With “Homegrown”, their first release since joining forces with Big Machine, they seem to be branching out in a slightly different direction.

Whether it’s due to the label change or new co-producer Jay Joyce, this record sounds a bit different than the others. For one thing, the production is a bit louder with heavy emphasis in the intro on drums and fuzzy electric guitars. I couldn’t help feeling a bit disappointed upon hearing those opening notes, fearing that it would be another one of country radio’s typically dull and overloud offerings. Things improve, however, once the song gets underway with Zac Brown’s unmistakable voice. There’s a little banjo and fiddle thrown into the mix, but neither is featured prominently. Sonically, it isn’t structured like a country song at all, but the tune is very catchy and before you know it you’ll be tapping your toes in spite of yourself. The lyrics, about a protagonist who is more than content to smell the roses and enjoy his lot in life, are on the light side, but at least provide a theme that is country, even if the sound isn’t.

Written by Zac Brown with Niko Moon and bandmate Wyatt Durrette, seems more like a feel-good summertime record rather that a January release, but it’s apparently struck a chord with both radio and fans. It currently resides at #4 on the charts, only ten days after its release. It looks like it’s going to be a monster hit. I wouldn’t rank it among the Zac Brown Band’s best work, but there is nothing terribly objectionable about it — and these days, that’s a big plus.

Listen to it here.