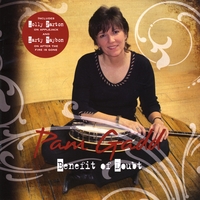 I like a little bluegrass mixed in with the straight country in my musical diet, and I was pleased to hear that Pam Gadd was releasing another album.  I first came across Pam back in 1990, when she was the more prominent of the two lead singers of Wild Rose, a bluegrass-infused all-female country band who released three albums on Universal and Capitol Records, and received a Grammy instrumental nomination.  She is not as productive as some artists, having recorded just two previous solo efforts, the excellent The Road Home on Vanguard in 1997, and the not-quite-as-good The Time Of Our Lives in 2001.  Musically, Pam falls in the hinterland where acoustic country overlaps with bluegrass.  Her voice is strong and distinctive with characterful inflections.

Although there are no instrumental tracks, there is some excellent acoustic playing throughout, which complements the material rather than overwhelming it.  Pam herself plays banjo, joined by former Wild Rose bandmate Wanda Vick on dobro, Vick’s husband Mark Burchfield on bass (except on ‘Farewell Wagon Master’), Bryan Sutton on guitar, Andy Leftwich on fiddle and mandolin, and Aubrey Haynie on mandolin.

The tone for the album is set with the opening track, a lively and beautifully played cover of bluegrass great Jimmy Martin’s ‘Hold Whatcha Got’, a song which will be more familiar to country fans as the song which lent the title to Ricky Skaggs’s late 80s album Comin’ Home To Stay.

Pam refers back to previous aspects of her career in a number of ways on Benefit Of Doubt.  The harmony singers include Dale Ann Bradley, with whom Pam worked in the New Coon Creek Girls, another all-female group, but this time a straight bluegrass one.  Wild Rose’s drummer Nancy Given Gardner, also sings harmony co-produces the album with Pam, although she only plays tambourine on one track (‘Applejack’), as there is no room for drums on the record.  Two of the songs Wild Rose recorded are given a new lease of life, namely ‘Home Sweet Highway’, which was one of the group’s better songs, and ‘Hit The Highway’.  I’m not a big fan of repeating songs previously recorded by the same artist, but reviving two songs after 20 years, on an album with 14 tracks is not unacceptable.  Another song, ‘Wrong Wrong Wrong’, was apparently recorded by the group but never released; it’s a catchy, medium-up-tempo number with a funky feel, which would have suited the Wild Rose vibe.