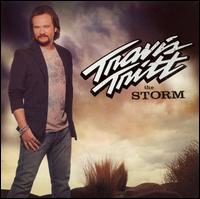 Travis Tritt’s most recent album was released in 2007 for independent label Category 5 Records. Co-produced with American Idol judge (and former Journey guitarist) Randy Jackson, the project debuted at #3 on the country album’s chart, his highest debut in more than thirteen years.

Pop singer/songwriter Richard Marx (who has also collaborated with Keith Urban) wrote the album’s lead single, and best known cut, “You Never Take Me Dancing.” Tritt pairs the tune with the oddly intoxicating “Mudcat Moan prelude” which has little to do with the song, but shows off his scatting abilities quite nicely. Despite the strong vocal, the track does nothing for me and is an unapologetic departure for Tritt. I cannot get past the drum machine and non-commercial vibe. It’s more than a miracle the song made it as high as #27.

Second single “The Pressure Is On,” a cover of the Hank Williams Jr song, didn’t even chart and with Tritt’s throaty southern rock vocal, that’s not surprising. He sings it well enough, but I cannot get into it at all, and at more than five minutes in length, it seems to just drag on and on.

Jackson and Tritt included two other covers in the set and sadly, both are more of the same. “Should’ve Listened,” written by the members of Canadian rockers Nickelback, boasts a nice country lyric but could’ve benefited greatly from an arrangement that’s more traditional. Same goes for Kenny Wayne Shepherd’s “Somehow, Somewhere, Someday” which lays the electric guitars on obnoxiously thick. Both songs are a mess, and far below Tritt’s usual standard.

Pop songwriter Diane Warren also contributes two cuts to the project. I’ve never been a big fan of her writing – pop power anthems designed to be big career records. She brings her usual flare to these cuts as well, and both are middle of the road. “I Wanna Feel Too Much” sounds like an Idol winner’s single that lays on the inspirational goo like its going out of style, while “I Don’t Know How I Got By” is too generic a love song for Tritt. He’s killed it with sentimental ballads before, but the track lacks the punch and sincerity of his previous love songs.

“What If Love Hangs On,” which Tritt co-wrote with Matchbox 20 lead singer Rob Thomas, is also a mess, ruined by his outlandish vocal. He’s rendered almost unrecognizable singing high notes that take away from the commanding powers of his deep voice. He also co-wrote “Doesn’t The Good Outweigh The Bad,” and it’s an excellent lyric but he and Jackson should’ve toned down the production. There are hints of his traditional country side, but they remain hidden by loud guitars and drums that distract from what this song could, and should have been. He wrote the title track solo, and it’s a good bluesy number, but keeps up the theme of being too loud and completely overstated with booming production. Nothing changes with “Rub off on Me,” or “High Time for Getting Down.”

I do actually really like one track on The Storm that goes against the loud, booming production that ruins the rest of this album. “Something Stronger Than Me” is the closest Tritt comes to reestablishing the brand that made him a respected artist in the first place. It isn’t traditional country, but the production is nicely understated and Tritt gives a sincere and heartfelt vocal. But what makes the track a keeper is the fabulous lyric, a story about personal daemons written by Don Poythress, Donnie Skaggs, and Michelle Little. It’s easily one of the best recordings of Tritt’s career.

All and all, The Storm is nothing short of a mess, and easily among the weakest of Tritt’s albums, even if its one of the most sonically consistent works of his career. I just cannot get past the loud booming guitars and drums that hinder opposed to help us enjoy the songs. There is far too much rock for my liking here, and I find myself once again wishing Tritt had stuck to his country side, which is the best quality of his musical personality.