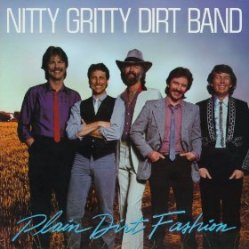 In 1982, The Dirt Band, as they were then known, reverted back to their former name and moved toward a more mainstream country sound. They scored their first Top 10 country hit in 1983 with “Dance Little Jean”. A year and a label change later, they solidfied their reputation as a mainstream country band with all of their singles through the end of the decade reaching the Top 10.

Plain Dirt Fashion was the band’s first album for Warner Bros., and in the summer of 1984, the song from which the album’s title was derived became the first of their three number one country hits. Written by Rodney Crowell, “Long Hard Road (The Sharecropper’s Dream)” is a nostalgic look back at an impovershed but happy childhood and my favorite Nitty Gritty Dirt Band single. With tight harmonies and plenty of fiddle, it is one of their most traditional efforts, foreshadowing the upcoming New Traditionalist movement which would take off in earnest about a year later. It was followed by the upbeat “I Love Only You”, written by Dave Loggins and Don Schlitz, which reached #3. “High Horse”, penned by Dirt Band member Jimmy Ibbotson, became the album’s third single. It peaked at #2 in early 1985. All three singles were tailor-made for country radio without any of the rock elements that had been the hallmark of much of the band’s earlier work. Two album cuts, however, are covers of old rock-and-roll hits — Bruce Springsteen’s “Cadillac Ranch and Meat Loaf’s “Two Out Of Three Ain’t Bad”, neither of which is particularly memorable.

In general, while the singles are timeless and have managed to avoid sounding dated, the album cuts haven’t aged as well, mainly due to the somewhat heavy-handed — and typical of the era — use of the drum machine, which mars “Cadillac Ranch”, “Run With Me” and “‘Til The Fire’s Burned Out”. “Video Tape”, the album’s closing track, gives away the album’s age by its reference to a now-obsolete medium. It asks, “wouldn’t you be in good shape if your life was on video tape?” a question that would never be asked in the era of iPhones and social media when so many have regretted having their actions recorded. The one truly great non-single cut is “The Face On The Cutting Room Floor”, about a has-been (or more accurately, never-was) actress who fails to make it in Hollywood after refusing to sleep her way to the top. The tune was written by Steve Goodman with band members Jeff Hanna and Jimmy Ibbotson.

In addition to the band members themselves, the album credits list some marquee names as additonal musicians, with Steve Gibson, Mark O’Connor, and Ricky Skaggs all lending their talents to the project.

Although it occasionally shows its age, Plain Dirt Fashion is still an enjoyable album and worth a listen if you haven’t already heard it. It is available for download or on a 2-for-1 CD with the band’s next project Partners, Brothers and Friends.

Album Review: Alan Jackson – ‘A Lot About Livin’ (And A Little ‘Bout Love)’ 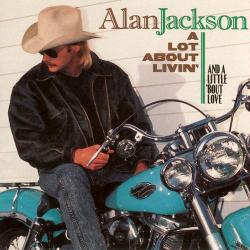 Alan Jackson followed up — and eventually eclipsed — the quadruple-platinum success of Don’t Rock The Jukebox with his third studio release, A Lot About Livin’ (And A Little ‘Bout Love) in the autumn of 1992. Once again he teamed up with Keith Stegall and Scott Hendricks, with Stegall taking on the lion’s share of the production duties (Hendricks’ sole contribution to the album was co-producing the track “Tonight I Climbed The Wall”).

The first single, “She’s Got The Rhythm (And I Got The Blues)” was one of the products of a series of 1991 writing sessions between Jackson and Randy Travis. Among the other songs from those sessions are “From A Distance”, from Don’t Rock The Jukebox, and “Forever Together”, “A Better Class of Losers”, and “I’d Surrender All”, which were all included on Travis’ 1991 album High Lonesome. With its R&B flavored arrangement, “She’s Got the Rhythm” was originally written with B.B. King in mind, but Jackson ended up keeping the song for himself. This decision paid off when the tune easily soared up the charts, despite its stylistic departure from Alan’s earlier work. It became his sixth #1 hit in December 1992.

The next single, “Tonight I Climb The Wall”, is one of my favorite Alan Jackson songs. Unlike “She’s Got The Rhythm”, this one is pure, straight unadulterated country, and an instant, if somewhat underrated classic. Despite peaking at #4, it was excluded from his Greatest Hits Collection, though it did resurface on his second greatest hits volume a few years later.

It was the third single — “Chattahoochie” — that became the breakout hit from this collection. Not only did it provide the line that became the title of the album, it received the CMA Awards in 1993 for Single of the Year and Song of the Year. Its release in April 1993 was timed to allow it to become a huge summertime hit, which it did. It became the first Alan Jackson single to earn gold certification, as well as his seventh #1. It’s a pleasant enough light-hearted tune, but one that hasn’t aged as well as the rest of Jackson’s catalog. It would be a stretch to say that I actively dislike the song, but I have grown weary of it over the years and wouldn’t miss it if I never heard it again.

Alan followed up this blockbuster with another summertime smash, “Mercury Blues”, a remake of a song written in 1949 and recorded by K.C. Douglas, who co-wrote it with Robert Geddins. Before Alan Jackson got to the song, it was recorded by the Steve Miller Band in 1976, David Lindley in 1991 and Finn Pave Maijanen in 1987, and it was subsequently recorded by Meat Loaf in 2003 and Dwight Yoakam in 2004. Jackson’s version, which peaked at #2, is by far my favorite. A slightly retooled version of Jackson’s rendition was featured in commercials for Ford trucks,with “Ford truck” being substituted for “Mercury”.

“(Who Says) You Can’t Have It All” was the fifth and final single from this set. Written by Alan with Jim McBride, it is another straight-country, George Jones-influenced number in the vein of “Tonight I Climb The Wall”, and just like that tune, this one peaked at #4 in Billboard. This is the type of song at which Jackson excels; I hope that there is a song or two like this on his new album.

As far as the non-single tracks go, “I Don’t Need The Booze (To Get A Buzz On)” is the weakest song, which means it would probably be the lead single if this album were released today. “Up To My Ears In Tears”, written by Jackson with Don Sampson is a Texas dancehall number that would sound right at home on a George Strait album from the 80s. “Tropical Depression”, also written by Jackson and Sampson, along with Charlie Craig, is an early example of Alan Jackson in his Jimmy Buffett mode, not lyrically or melodically deep, but a pleasant light-hearted number that hasn’t worn out its welcome like “Chattahoochie” has.

Overall, I don’t like this album quite as much as Don’t Rock The Jukebox, but it’s a much stronger collection than some of Jackson’s more recent work. It peaked at #1 on the Billboard Top Country Albums chart and was certified six-times platinum, making it Jackson’s best-selling studio album. It is available from Amazon and iTunes and is well worth adding to your collection, if you don’t own it already.