Leave a comment Posted by Occasional Hope on April 20, 2018

Arkansas-born singer-songwriter Ashley McBryde emerged last year with her impressive Warner Brothers single ‘Little Dive Bar In Dahlonega’. This well written song about finding relief from a hard life was inspired by the co-writer’s real life story of meeting his future spouse. There is an optimistic mood which is counterpointed by a detailed and realistic picture of small town America. It is a really good song, well suing by Ashley. The only complaint I have is with slightly intrusive production. Jay Joyce, best known for his work with Eric Church (who helped to bring Ashley to the fore, and to whom she is being compared), is the guilty party here, and his rock background dominates on Ashley’s new album.

The most effective tracks are the quitter, more reflective ones (like ‘Dahlonega’). The title track is a delicate acoustic song about the struggles of making it as a musician and defying those who tried to discourage her early on and now pretend they always supported her:

“Don’t waste your life behind that guitar
You may get gone, but you won’t get far
You’re not the first
You won’t be the last
And you can tell us all about it
When you come crawling back”
…

To the end, this remains understated and thoughtful, as does ‘Andy (I Can’t Live Without You)’. This is a realistic love song about a man who has his fair share of imperfections and irritating behaviour, but is still the love of her life. Apparently it is actually about Ashley’s male best friend and room mate rather than a romantic interest as such, but it feels more like a marriage.

You’re always voicin’ your opinion
You play your guitar way too loud
And God, I reckon it would kill you
To lift a finger and help me clean this house
You know your jokes ain’t all that funny
But I’ll keep on laughin’ if you want me to
Nobody understands why I love you
I can’t live without you

A very stripped down arrangement allows the song to shine.

These three tracks are all fantastic and strongly recommended by me.

Elsewhere the sound is more rock-influenced. ‘Radioland’ is a catchy country rock ode to the joys of music encountered as a child. ‘The Jacket’ is a very nice mid-paced tribute to a beloved old article of clothing symbolic of Ashley’s father’s life.

‘American Scandal’ is a sultry rock ballad comparing a relationship to an illicit one (specifically President Kennedy and Marilyn Monroe); I didn’t particularly like this lyrically, although it was well sung; and the production was heavy handed. It leads into the bluesy soulful ‘Southern Babylon’, again a good song but not to my taste, with hushed vocals and supernatural-inspired lyrics.

‘Living Next To Leroy’ is an excellent song about high school friends whose lives are destroyed by crystal meth “on the dark side of the country” – very powerful lyrics but spoiled by the heavy electric guitar – although perhaps its very dissonance is making a point.

‘El Dorado’ on the other hand is too loud and busy from the start, although there is an engaging lyric about life on the road. ‘Home Sweet Highway’, abut being on the way home is a bit more restrained and all the better for it. ‘Tired Of Being Happy’ is a pretty good song about an encounter with a recently married ex, and offering him a way out, once more rather smothered by the backings.

Ashley McBryde is an extremely talented artist with very strong songwriting skills. However some of the arrangements on this record don’t work for me. Those who do like more rock influences in the country should find much to love in this album, and I think it’s worth checking out even if that doesn’t apply.

Louisiana paramedic James Dupre has become something of a youtube phenomenon with his covers of country classics.  He has now managed to use that exposure to record an album in Nashville, produced by Kyle Lehning and Jerry Douglas (who also contributes dobro and lap steel), with a fine set of musicians and some well-chosen songs, mostly from Nashville songwriters.  Most are set to a broadly similar slowish-mid-tempo, with a laid back feel.  James has a warm voice with a pleasing tone and relaxed style with phrasing which is often reminiscent of Alan Jackson or Don Williams.

The outstanding song is the melancholy ‘Ring On The Bar’, written by Byron Hill and Brent Baxter, a beautifully constructed lyric set to a beautiful, gentle melody, about the aftermath of a failed marriage which opens the set.  The title hook refers in the opening verse to the watermark left by the protagonist’s beer as he thinks over his situation, and later to the wedding ring he abandons there:

Another fine song on the theme of a man struggling with the aftermath of a failed relationship is ‘Alright Tonight’, written by Tom Douglas and Casey Beathard:

Perfectly understated in its conflicting emotions, we really don’t believe him when he says that he’s “alright”, tonight or at any other time.

END_OF_DOCUMENT_TOKEN_TO_BE_REPLACED 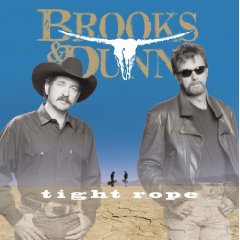 The duo’s sixth studio album, 1999’s Tight Rope, saw them in bit of a rut. After a string of multi-platinum sellers, this album remains their only studio effort to date (apart from their latest, Cowboy Town) not to be classified platinum, and none of the three singles was a really big hit. Each of the previous albums had elicited five singles, with all but two making the top ten, with a good proportion hitting the top of the charts, until ‘South of Santa Fe’ had faltered outside the top 40 just before the release of Tight Rope. Poor Kix never got another single released after this catastrophic failure.

This really is an album of two halves. Not only did Kix and Ronnie divide the vocal leads fairly evenly, they contributed six songs each as writers, each singing lead on his own songs, with Ronnie also getting a bonus cover. Furthermore, although the duo are credited as co-producers throughout, one suspects this was a matter of courtesy. Kix’s tracks were co-produced by old friend Don Cook, but Ronnie’s were co-produced by Byron Gallimore at another studio. All the singles came from Ronnie’s half. As a whole the album sounds their most pop-influenced to date.

Only three singles came from Tight Rope, and the first two failed to crack the top 10. ‘Missing You’, a 1980s pop cover, reached #15. The arrangement may have been a little too pop for country radio, with its whispery call-and-response background vocals, but Ronnie’s lead vocal is excellent. The cheerful rocked-up honky tonker ‘Beer Thirty’ barely squeaked into the top 20, despite being in the same vein as many of their past successes, and the chart failure of this must have been a shock. The big declaration of love ballad ‘You’ll Always Be Loved By Me’, their only single released in the year 2000, deservedly did better, reaching #5. This was the song which provided the album title, from the line “trust is a tightrope we all have to walk”.

Ronnie is in great voice on this album. The brooding ballad ‘Hurt Train’ and the sad ‘All Out Of Love’ have a slightly pop feel, but are very well sung. ‘Goin’ Under Gettin’ Over You’, which opens the set is a fairly brisk number about getting resigned to heartbreak, which might have been better with a more subdued vocal. It did actually get a small amount of unsolicited radio airplay.