Leave a comment Posted by Occasional Hope on March 7, 2011 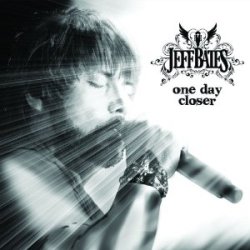 When I heard the lead single and title track of this album a few weeks ago, I was really looking forward to Jeff Bates’s religious album. I was disappointed to find that it was in fact only a six-track EP. (There is also a separate DVD with the same title, which includes live versions of the songs on the EP plus a handful of others.)

Theologically, the “rapture” is posited by some Christian denominations as the bodily lifting to heaven of the righteous in the last days, based on a passing reference in one of the Epistles. This album opens with an imagined narrative of ‘The Rapture’, as previously recorded by Jason Matthews, one of its writers, on his rather good Hicotine album in 2008, but Jeff’s version is better. A simple piano accompanies the testimony of one of those who has had “no time for Jesus” until he finds he has been left behind when his wife and children (in better favor with Heaven) . The vocal is great, and it does have some emotional power, but this is one that doesn’t quite work for me personally.

Jeff co-wrote the other three new songs. I’ve already talked about the mature and lovely title track (which he wrote with Matthews), and this is still my favorite track.

It really won’t be to everyone’s taste, but I was deeply moved by the tear-jerker ‘If You Could See Me Now’, which was written with Robert Arthur and Marcus Franklin Johnson. There is an understated but intensely emotional vocal as Jeff plays the part of an infant who has died and is speaking to his family from heaven:

It was inspired by the death of a band member’s newborn grandchild.

The same team (plus Kirk Roth) composed the far less memorable ‘Living Stones’ a tribute to those individuals who help in times of trouble. It drags a bit despite a gritty vocal.

There are two well-worn traditional numbers. Jeff gives a slow intense reading of ‘Wayfaring Stranger’. It’s not my favorite version of the song, but it offers a very convincing portrayal of a weary soul; where it falters a little, at least for me, is in lacking the sense of joy at finally reaching heaven’s rest. Black gospel style backing vocals come in quite effectively towards the end of the song, as they do on a rocked up and rather leaden take on ‘Life’s RailwayTo Heaven’, the record’s least successful moment.

This is a little more uneven record than I was hoping for, not to mention much shorter, but there are some great moments nonetheless.