An updated and expanded version of an article previously published by The 9513.

“I figure we live in two worlds – public and private. It seems like I’ve got to prove myself in both all the time. I’ve got to climb mountains right to the top and then find new ones to climb. Whenever I finish writing a song, I always ask myself, “Well, Stutterin’ Boy, is that all you’ve got?’” — Mel Tillis

Introduction to Stutterin’ Boy – The Autobiography of Mel Tillis (1984)

“It seems like just yesterday that I left Florida head’n for Nashville, Tennessee in my ’49 Mercury with a busted windshield, a pregnant wife and $29.00 in my pocket. 2002 marks my 46th year in the music business. If I lost it all tomorrow, I guess I could say it only cost me $29.00 and it’s been one heck of a ride!”

Texas journalist and noted music critic John Morthland once described Mel Tillis as a journeyman country singer, intending it as praise. While he never quite reached the top echelon of country music stardom, he had a long and distinguished career as a singer and songwriter, writing many hits for other artists and having many hits of his own. His compositions continue to be performed and recorded today and he has left an additional legacy in the form of daughter Pam Tillis, an excellent singer in her own right, and Mel Tillis, Jr., who works mostly behind the scenes as a record producer.

Lonnie Melvin “Mel” Tillis was born in Tampa, Florida on August 8, 1932. His stutter developed during childhood, the result of a near-fatal bout with malaria. As a child, his family moved frequently around the Tampa area, but sometimes further as in the family’s 1940 move to Pahokee, FL, on the southeastern shore of Lake Okeechobee. In high school he learned to play drums, marching with the Pahokee High School Band. Later he would learn to play the guitar.

In late 1951 Tillis joined the United States Air Force. It was while in the Air Force that he started songwriting. One of his first songs was “Honky Tonk Song,” which became a major hit for Webb Pierce in 1957. While stationed in Okinawa, he played at local nightclubs with a band he formed called The Westerners.

After leaving the military in 1955, Tillis worked at various jobs. At some point he met Buck Peddy, who briefly served as his manager. Peddy and Tillis moved to Nashville in 1956. Initially unsuccessful at landing a writing deal, Tillis met Mae Boren Axton (writer of “Heartbreak Hotel”) who put in a good word for him with Jim Denny at Cedarwood Publishing. The first hit out of the box was “I’m Tired,” a song which was pitched to Ray Price. According to Tillis’ autobiography, Price wasn’t ready to issue a new single at the time the song was pitched to him by Buck Peddy but Webb Pierce heard the song and wanted it. Pierce only heard one of the verses so he had Wayne Walker write an additional verse and that’s the version that became the hit. Tillis only received a third of the royalties on this particular song, but it was a start. Unfortunately, it was also the start of a pattern; for the next few years he would suffer the addition of “co-writers” to most of his recorded songs, the chief culprits being Buck Peddy and Webb Pierce (a practice not uncommon at the time).

From this point forward a torrent of great songs flowed from his pen – over a thousand songs, of which over six hundred have been recorded by major artists. While it would take too long to list all of them, the following is a representative list of songs and artists:

•“Thoughts Of A Fool” (George Strait)

In 1958, Tillis finally secured a recording contract with a major label, landing on Columbia Records. That same year he had his first Top 40 hit, “The Violet And A Rose,” followed by the #27 hit “Sawmill.” Unfortunately, while he made many fine recordings for Columbia, his singing career failed to catch fire. His records mostly charted but there were no big hits. During this period other artists continued to record his songs, both as hit singles, and as album tracks. From Columbia, he moved to Decca from 1962-1964.

In 1966 he moved to Kapp Records where he made many noteworthy records. In fact his first recording for Kapp had him performing on a Bob Wills album. “Wine” finally cracked the Top 20 for Tillis (#15), followed by “Stateside” (#17), “Life Turned Her That Way” (#11), “Goodbye Wheeling” (#20), and finally in 1969 that elusive Top 10 record, “Who’s Julie” (#10). After “Who’s Julie” the hits came easier as “Old Faithful” (#15), “These Lonely Hands of Mine”(#9), “She’ll Be Hangin’ Around Somewhere” (#10), and “Heart Over Mind” (#3) followed in quick succession. The Kapp years also found Tillis becoming more of a presence on television, first as a regular on the Porter Wagoner Show, and later on the Glen Campbell Good-Time Hour. He also guested on various other television shows.

Tillis left MGM for MCA in 1976 where the string of hits continued, albeit more heavily produced records with more strings, keyboards, and background singers and far less fiddle and steel guitar. The string of hits continued. He scored nine Top 10 records, including four #1 records in “Good Woman Blues,” “Heart Healer,” “I Believe In You,” and the infamous “Coca-Cola Cowboy.” At #2, “Send Me Down To Tucson” just missed reaching the top on Billboard. A switch to Elektra in late 1979 saw Tillis rack up five more Top 10 singles, including the 1981 #1 “Southern Rain,” but by the end of 1982 his run as a high charting artist was over. There was one last Top 10 record, “New Patches” (released on MCA in 1984). He continued to record for a few more years, releasing an album for RCA in 1985, but eventually he faded off the major labels except for reissues and compilations.

Tillis had about an 18 year run as a top charting artist. He won many BMI awards, including Songwriter of the Decade. In 1976 he was inducted into the Nashville Songwriters International Hall of Fame and that same year he was a surprise winner of the Country Music Association’s (CMA) Entertainer of the Year, beating out Waylon, Willie and Dolly for the honor. In June of 2001, he received a Special Citation of Achievement from BMI for three million broadcast performances of “Ruby, Don’t Take Your Love To Town.” He received two long-overdue recognitions in 2007 as he was finally inducted as a member of the Grand Ole Opry in 2007 (his daughter Pam performing the ceremony), and in October 2007 he was elected to the Country Music Hall of Fame.

Along the way Tillis recorded more than 60 albums with 36 top ten singles, appeared on numerous television shows, starred in several movies (Cannonball Run, Cannonball Run II, Smokey and the Bandit II, The Villain, W.W. and the Dixie Dance Kings, Uphill All The Way and Every Which Way But Loose) as well as several television movies, including Murder in Music City and A Country Christmas Carol.

Although it has been more than two decades since Tillis was a regularly charting artist, he has been anything but quietly retired. In 1998, he combined with old friends Bobby Bare, Waylon Jennings, and Jerry Reed to record a two-album set, written entirely by another old friend, Shel Silverstein, titled Old Dogs (later condensed into a single disc). Also in 1998, he recorded his first gospel album titled Beyond The Sunset and served as spokesman and honorary chairman for the Stuttering Foundation of America. In recent years he has recorded a Christmas album and a comedy album.

He continues to tour occasionally and for years he had his own theater in Branson, MO (1994-2002). He has since sold the theater, but still appears there during the holidays. He records only occasionally and enjoys life. He is an avid fisherman. In February 2012 he received the National Medal of the Arts, presented to him by President Obama.

END_OF_DOCUMENT_TOKEN_TO_BE_REPLACED 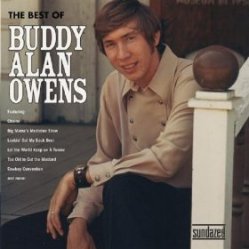 A revised and expanded version of a post first published on The 9513:

The 1970s were not my favorite decade for country music but it was the decade in which I did my largest amount of listening to country radio, having the good fortune to have such country giants as WSUN AM- 620 in St. Petersburg, FL, WHOO AM-1090 in Orlando and WCMS AM-1050 in Norfolk, VA for my listening pleasure, plus I could tune in WSM AM – 650 in Nashville at night. I did a lot of shift-work during this decade so my radio was on constantly.  This list is meant neither to be a comprehensive list of great country songs from the 1970s, nor any sort of ranking of records. It’s just a list of some songs that I liked and remember. See if you recall any of these records:

A silly record with some great trumpet work, “Cowboy Convention” is a cover of a Lovin’ Spoonful record from the mid 60s, about the villains of the silent movie era who were always tying Sweet Nell to the railroad track. The Buddy Alan title credit on the label is misleading as this is really a Buddy Alan/Don Rich duet with the Buckaroos. Buddy Alan, of course, is the son of Buck Owens. END_OF_DOCUMENT_TOKEN_TO_BE_REPLACED