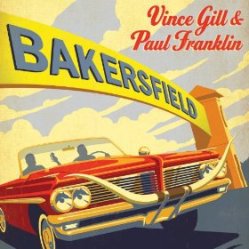 In recent years, covers and tributes albums have been a dime a dozen; it seems that nearly every artist past his or her commercial peak has released a collection of songs that he/she grew up listening to. Bakersfield, the recently released effort from Vince Gill and steel guitar virtuoso Paul Franklin, takes a different approach; instead of paying tribute to a particular artist or compiling their favorite songs, they opted to pay homage to a specific sub-genre of country music: the Bakersfield Sound, which emerged in California in the late 1950s, in response to the increasingly crossover-oriented countrypolitan music being made in Nashville at the time.

The two most successful and well-known Bakersfield artists were Buck Owens and Merle Haggard, and it is from their catalogs that the material on Bakersfield is culled. Although some of Buck’s and Merle’s big hits are represented here, Gill and Franklin, who produced the project themselves, also delved deeper into the two legends’ discographies and included some lesser known gems.

There isn’t a Vince Gill album that I don’t own, so from the time that this project was announced it was a must-have for me. Paul Franklin’s participation was a bonus, as it ensured that the album would include a generous amount of pedal steel guitar, arguably the most important instrument in country music, and one that is criminally underrepresented on most contemporary country recordings.

Although I did initially have some reservations that Vince could do justice to some of the Haggard tunes, he rises to the occasion most of the time. Both “Branded Man” and “The Bottle Let Me Down” are performed beautifully with the wonderful Dawn Sears taking over harmony duties from Bonnie Owens. However, “The Fightin’ Side Of Me”, while good, doesn’t pack the same punch as Merle’s original 1969 version. I’m not as intimately familiar with the Buck Owens material, so I’m inclined to slightly favor the ones that are newer to me, namely “But I Do” and “Nobody’s Fool But Yours”.

I can find no fault with the material or how it is performed; these recordings are impeccably performed and are a reminder of what country music once was and what it ought to be. The album falls short only in what it does not provide — namely, more music. It contains a mere ten tracks and clocks in at just under 37 minutes. I wish that it contained a few more tracks, and that Gill and Franklin had seen fit to include a few songs from other Bakersfield artists. It’s inevitable that Owens and Haggard will dominate a project like this one, but it would have been nice to have heard a Wynn Stewart, Tommy Collins or Maddox Brothers and Rose song or two. Let’s hope that a second volume is in the works to rectify these omissions.

It goes without saying that Bakersfield will receive no support from country radio, but it is worthy of a Grammy nomination and I hope that it sells respectably and gets the critical acclaim that it so richly deserves.