Love And Music was the tenth duet album by Porter Wagoner & Dolly Parton. Released in July 1973, only one single was released from the album, a cover of a Carl Smith oldie from 1951, “If Teardrops Were Pennies”, a song which Carl took to #8, but Porter and Dolly took to #3. As always, Bob Ferguson is listed as the producer.

The album opens up with “If Teardrops Were Pennies”. I don’t happen to own a vinyl copy of this album, but I’ve seen it and if I recall correctly Carl Butler, who wrote this song, also wrote the liner notes to this album. The song is a mid-tempo romp that Porter & Dolly do very well indeed, although I also like Carl Smith’s version of the song and the recordings that Carl & Pearl Butler made of the song.

An acre of diamonds I’d offer to you
A solid gold mansion, an airplane or two
This whole world would be yours to have and to hold
If teardrops were pennies and heartaches were gold

Next up is the first of four Porter Wagoner tunes on the album “Sounds of Night” a gentle ballad with a nice fiddle intro by Mack Magaha. The song describes the lonely sounds of night (whippoorwills, church bells) and how they translate to human emotions

I don’t know much about Howard Tuck, other than what I found in his obituary (http://www.mywebtimes.com/obituaries/howard-red-tuck/article_e67fea9d-9ee8-5b24-8d2c-e7e5cf4e0300.html ) but his song “Laugh The Years Away” is a good song that would have made a good single. The song is a humorous look at married life, happy even if not blessed with material wealth.

Next up is the first of four Dolly Parton tunes on this album “You”, a rather bland ballad of domestic bliss.

Porter’s “Wasting Love” also would have made a good single, an up-tempo song about a couple growing apart. While the lyrics are good, the strength of the song is the melody.

“Come To Me” is a slow, serious ballad, that essentially finds Porter and Dolly trading verses. The song is inspirational without being religious. The song had no potential as a single, but it is a nice song.

Porter co-wrote “Love Is Out Tonight” with Tom Pick. The song is a slow ballad with very vivid imagery.

Porter Wagoner penned “In The Presence of You”. The song features a nice piano intro to a slow ballad of a people who cannot find the right words to say to each other, although they love each other deeply.

Dolly penned “I Get Lonesome By Myself”, another of Dolly’s lonesome little girl songs. In this song the narrator stumbles across the daughter he abandoned a few years back. Dolly’s part is spoken in a somewhat creepy effort at a six year old girl’s voice.

The album closes with the forth Dolly Parton composition “There Will Always Be Music”, a nice capstone to the album.

Dolly Parton has a well deserved reputation as a songwriter, but Porter was no slouch either, although neither Porter nor Dolly would rank up there with Cindy Walker, Dallas Frazier, Harlan Howard or Hank Cochran. On this album at least, Porter’s songs are stronger than Dolly’s.

This is a pretty decent album, although not necessarily one of their better albums. As Jonathan Pappalardo noted in his excellent review of The Right Combination/Burning The Midnight Oil, “[w]hile none of these songs have truly amounted to anything, they combine to make a fine collection on their own”.

My feelings exactly – B+

August 1970, saw the release of the fifth Porter and Dolly duet album in Once More. The album featured five songs that Dolly had a hand in writing, plus two fine songs from the Don Reno and Red Smiley songbook, perhaps not so surprising since Porter’s fiddle player Mack Magaha had spent years playing with Reno and Smiley

The album opens up with “Daddy Was An Old Time Preacher Man” co-written by Dolly with her aunt Dorothy Jo Hope about the Reverend Jake Owens, Dolly’s maternal grandfather, who was a Pentecostal minister. Surprisingly, this would be the only single released from the album, reaching #4 on Record World, #7 on Billboard and #12 on the Canadian country chart. The song has the feel of an old-time gospel song and remains one of my favorite Porter & Dolly songs.

This is followed by a magnificent cut on the Reno and Smiley classic “I Know You’re Married But I Love You Still” a song that Mack Magaha wrote with Don Reno. The song, a quintessential forbidden fruit song was a staple of the Reno & Smiley repertoire for years and has been covered as an album track by many country artists. The duo of Bill Anderson and Jan Howard had a minor hit with the song as did Red Sovine.

“Thoughfulness” is a modest ballad written by Dolly’s uncle Bill Owens. The song is a little subdued compared to most of the duo’s material but it makes a nice album track.

“Fight and Scratch” is one of those humorous ‘bickering couples’ songs that Dolly excelled in writing. I think it would have made for a good single but perhaps RCA was leery of issuing too many novelties as singles.

Louis Owens wrote “Before Our Weakness Gets Too Strong” is a straight ahead country ballad, a let’s not cheat song. I’m guessing that Louis Owens might be one of Dolly’s kin.

“Once More” was the last top ten chart hit for the King of Country Music Roy Acuff back in 1958. Later the Osborne Brothers recorded the song for Decca. Porter and Dolly harmonize nicely on the song, but their recording sounds tame compared to the Acuff and Osborne versions. I think if the song had been considered as a single, the duo would have put more muscle into this Dusty Owens (no kin to Dolly) song.

Joe Babcock’s “One Day At A Time” is neither the same song has Marilyn Sellars gospel hit from 1974 and nor is the same song that Don Gibson hit from that same year. This song is a reflective song about the way to approach life.

Dolly wrote “Ragged Angel”, another one of those doomed children songs that Dolly apparently needed to write as a catharsis. It’s a good song but the lyrics are nothing special. What is of interest is the exquisite Porter and Dolly’s vocal harmonies, which are a little different than their usual fare.

“A Good Understanding” is one of Dolly’s compositions, which suggests a marital relationship in which the ground rules were agreed upon in advance. The opening lyric suggests that this might have been an open marriage but as the lyrics unfold a more traditional relationship is revealed.

The album closes with the Don Reno composition “Let’s Live For Tonight”. While still sticking with usual bluegrass array of instruments, Reno and Smiley probably were the bluegrass group whose music most closely resembled the country music of its era.

Bob Ferguson is listed as the producer on this album, but I suspect that Porter Wagoner carried the bulk of the production duties. There is a characteristic Porter Wagoner & The Wagonmasters sound that permeates all of Porter’s RCA records. That isn’t a bad thing because it made the production of Porter’s records sound different that the vast majority of RCA product, but I am sure that it must have gnawed at Dolly at least a little, because if you removed Dolly’s voice from the duet albums you would have a Porter Wagoner record that sounded incomplete, needing another voice or voices. I like this album quite a bit but for whatever reason, this album is not quite as exuberant as some of their prior (and future efforts). I’d give this a B+ but a little more emphatic treatment of a couple of the songs would have turned this into an A. 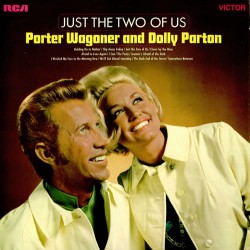 The album opens up with “Closer By The Hour”, a song about a relationship moving towards its inevitable consummation. The song is a jog-along ballad written by Al Gore (not the same Al Gore as either of the two Tennessee hack politicos of yesteryear).

Next up is an outstanding version of Tom T. Hall’s “I Washed My Face In The Morning Dew”, This song was Tom T’s first charted single as a singer, reaching #30 in 1967. I think Porter & Dolly missed a bet in not releasing this as a single.

“Jeannie’s Afraid of the Dark” is one of those morbid dead child ballads that Dolly excelled in writing. The song was the B-side of “We’ll Get Ahead Someday” but was sufficiently popular that it charted separately at #51 in late 1968 (Record World had it reach #31).

Her two little feet would come running into
Our bedroom almost every night
Her soft little face would be wet from her tears
And her little heart pounding with fright
She’d hold out her arms, then she’d climb in beside us
In her small voice, we’d hear her remark
“Mommie and Daddy, can I sleep here with you
‘Cause Jeannie’s afraid of the dark”

Jerry Chesnut’s “Holding On To Nothin’”was the second Porter & Dolly single released, and the first single from this album. Released in April 1968, the single spent 16 weeks on the charts reaching a peak of #17. The song is a mid-tempo ballad about what happens when the flame burns out.

Curly Putman’s “Slip Away Today” is a bit more introspective than many of the pair’s songs, sort of in the vein of Carl & Pearl Butler’s “Don’t Let Me Cross Over”. It is a good song but not one with any real potential as a single.

At the time this album was released Jerry Chesnut was one of Nashville’s leading songsmiths. The next tow songs “Just The Two of Us” and “Afraid To Love Again” are both nice ballads well suited to Porter and Dolly’s vocal harmonies.

Mack Magaha, the fiddler in Porter’s Wagonmasters and before that in Don Reno & Red Smiley’s Tennessee Cutups , isn’t normally thought of as a songwriter, but he did some song writing with both Reno & Smiley and Porter & Dolly recording his songs. Mack’s “We’ll Get Ahead Someday” is a humorous up-tempo song that was the lead single from the album reaching #5.

Even in 1967, Merle Haggard’s songs were in great demand, and Porter and Dolly latched onto a good one in “Somewhere Between”, one of many Haggard compositions that the Hag never got around to releasing as a single (many years later Suzy Bogguss released it as a single). It works well as a duet for Porter and Dolly.

I love you so much, I can’t let you go
And sometimes I believe you love me
But somewhere between your heart and mine
There’s a door without any key

The album closes with a pair of Dolly Parton compositions in “The Party” and “I Can”. “The Party” is another one of those morbid ballads that Dolly seemed to crank out so easily. The highlight of the song is Porter’s narration:

“I Can” has the feel of folk music. Both of these two Dolly Parton compositions are good album tracks.

Porter and Dolly would record stronger albums as far as song quality is concerned, but of more importance than that was that this early in the game, they had their vocal style down pat. The production on the album sounds like Porter’s solo albums, but that’s a good thing.