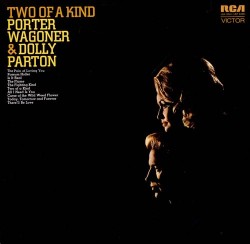 Porter and Dolly released their sixth albums of duets in February 1971. Strangely, no singles were released from Two of a Kind, but this in no way suggests that the material was in any way sub-par. As usual, most of the album’s songs are from the pen of Dolly, including three co-writes with Porter. The first of those co-writes is “The Pain of Loving You”, which features a horn arrangement similar to that of “Just Someone I Used To Know”. It should have been released as a single. The Osborne Brothers apparently did release it as a single — presumably around that same time, which may explain why Porter and Dolly’s version was relegated to album cut status. About a year later the track resurfaced as the B-side to the duo’s single “The Right Combination”. Similarly, the title track — another Wagoner/Parton composition — was the B side of “Better Move It On Home”, which was part of a hits compilation released later in 1971. The duo’s third composition is the catchy but lyrically light mid-tempo “There’ll Be Love” which serves as the album’s closing track.

The collection also includes three of Dolly’s solo compositions: the excellent “Is It Real?”, “The Flame”, and “The Fighting Kind”, which was another of those bickering husband and wife songs for which Porter and Dolly were well known. Although enjoyable, this one lacks the spunk of “I’ve Been Married Just as Long as You Have”, “Fight and Scratch” or “Better Move It On Home”.

One of the album’s best cuts — and one of only three in which Dolly did not have a hand in writing — is “Possum Holler”, a novelty tune penned by the great Dallas Frazier. It is a humorous reminiscence of a clandestine courtship that ends with a shotgun wedding. And although it’s not one of the album’s best songs, the most interesting one was penned by Dolly and Louis Owens. “Curse of the Wild Weed Flower” is a rare example of social commentary from Porter and Dolly. The anti-counterculture theme, speaking of the evils of marijuana, is certainly at odds with contemporary thinking and modern listeners would likely dismiss it as a quaint relic of a bygone era.

With no singles to support it, Two of a Kind didn’t chart quite as high as the duo’s earlier albums (reaching #13) but today it is only one of two of their original albums that is available for digital download in its original form. Bob Ferguson’s (or perhaps Porter’s) production is heavy on Nashville Sound choruses, but there are plenty of wonderful steel guitar licks throughout the album and that alone makes it worth listening to. 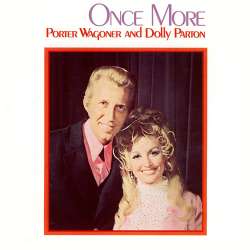 August 1970, saw the release of the fifth Porter and Dolly duet album in Once More. The album featured five songs that Dolly had a hand in writing, plus two fine songs from the Don Reno and Red Smiley songbook, perhaps not so surprising since Porter’s fiddle player Mack Magaha had spent years playing with Reno and Smiley

The album opens up with “Daddy Was An Old Time Preacher Man” co-written by Dolly with her aunt Dorothy Jo Hope about the Reverend Jake Owens, Dolly’s maternal grandfather, who was a Pentecostal minister. Surprisingly, this would be the only single released from the album, reaching #4 on Record World, #7 on Billboard and #12 on the Canadian country chart. The song has the feel of an old-time gospel song and remains one of my favorite Porter & Dolly songs.

This is followed by a magnificent cut on the Reno and Smiley classic “I Know You’re Married But I Love You Still” a song that Mack Magaha wrote with Don Reno. The song, a quintessential forbidden fruit song was a staple of the Reno & Smiley repertoire for years and has been covered as an album track by many country artists. The duo of Bill Anderson and Jan Howard had a minor hit with the song as did Red Sovine.

“Thoughfulness” is a modest ballad written by Dolly’s uncle Bill Owens. The song is a little subdued compared to most of the duo’s material but it makes a nice album track.

“Fight and Scratch” is one of those humorous ‘bickering couples’ songs that Dolly excelled in writing. I think it would have made for a good single but perhaps RCA was leery of issuing too many novelties as singles.

Louis Owens wrote “Before Our Weakness Gets Too Strong” is a straight ahead country ballad, a let’s not cheat song. I’m guessing that Louis Owens might be one of Dolly’s kin.

“Once More” was the last top ten chart hit for the King of Country Music Roy Acuff back in 1958. Later the Osborne Brothers recorded the song for Decca. Porter and Dolly harmonize nicely on the song, but their recording sounds tame compared to the Acuff and Osborne versions. I think if the song had been considered as a single, the duo would have put more muscle into this Dusty Owens (no kin to Dolly) song.

Joe Babcock’s “One Day At A Time” is neither the same song has Marilyn Sellars gospel hit from 1974 and nor is the same song that Don Gibson hit from that same year. This song is a reflective song about the way to approach life.

Dolly wrote “Ragged Angel”, another one of those doomed children songs that Dolly apparently needed to write as a catharsis. It’s a good song but the lyrics are nothing special. What is of interest is the exquisite Porter and Dolly’s vocal harmonies, which are a little different than their usual fare.

“A Good Understanding” is one of Dolly’s compositions, which suggests a marital relationship in which the ground rules were agreed upon in advance. The opening lyric suggests that this might have been an open marriage but as the lyrics unfold a more traditional relationship is revealed.

The album closes with the Don Reno composition “Let’s Live For Tonight”. While still sticking with usual bluegrass array of instruments, Reno and Smiley probably were the bluegrass group whose music most closely resembled the country music of its era.

Bob Ferguson is listed as the producer on this album, but I suspect that Porter Wagoner carried the bulk of the production duties. There is a characteristic Porter Wagoner & The Wagonmasters sound that permeates all of Porter’s RCA records. That isn’t a bad thing because it made the production of Porter’s records sound different that the vast majority of RCA product, but I am sure that it must have gnawed at Dolly at least a little, because if you removed Dolly’s voice from the duet albums you would have a Porter Wagoner record that sounded incomplete, needing another voice or voices. I like this album quite a bit but for whatever reason, this album is not quite as exuberant as some of their prior (and future efforts). I’d give this a B+ but a little more emphatic treatment of a couple of the songs would have turned this into an A.