Leave a comment Posted by Occasional Hope on November 30, 2012 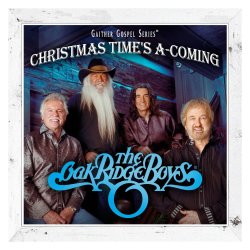 We kicked off the Christmas season with Wednesday’s review of Spotlight Artist Sammy Kershaw’s A Sammy Klaus Christmas. Continuing the theme, veteran performers the Oak Ridge Boys also have a new Christmas album out. It’s their sixth since 1982, but perhaps surprisingly there isn’t much overlap of material even though most of the songs are pretty familiar.

The muscular ‘Peterbilt Sleigh’, written by Lonestar’s Richie McDonald (who has recorded it himself) with Philip Douglas and Ron Harbin, is a silly but quite entertaining story of Santa needing to call on a trucker for help when his sleigh breaks down one Christmas Eve. In contrast, the Harlan Howard song ‘All I Want For Christmas Is You’ is a sweet, understated seasonal love song, with Sterban on lead.

The group sadly bring little new to ‘Christmas Time’s A Coming’ (although it’s enjoyable enough) or the overused ‘The Christmas Song’. I didn’t like their ridiculously overblown version of ‘Santa Claus Is Coming To Town’ at all, and could also have done without a dragging take on ‘I’ll be Home For Christmas’.

The bulk of the material (as with Kershaw’s album) offers secular cheer, but brace of religious numbers appears three-quarters through the set. The best of these is the delicately tender ‘Getting Ready For A Baby’, written by Jerry Salley, Sue C Smith and Lee Black, and which touchingly explores the emotions of Mary and Joseph. An intimate ‘Mary, Did You Know’ is also feelingly interpreted.

‘Mary Had A Little Lamb’ (not the nursery rhyme, but a new song about the baby Jesus) has a faint Celtic feel but drags a bit. ‘Glorious Impossible’ is okay but a little forgettable. The hymn ‘Joy To The World’ seems on paper perfect fare for the quartet’s four part gospel harmonies, but an arrangement with electric guitars bursting in is horribly misjudged.

Overall, this makes a pleasant if inessential addition to the ranks of Christmas albums.