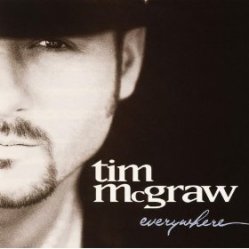 By the time Everywhere saw the light of day in June 1997, Tim McGraw was an established hit maker but not a superstar. His music was mostly cast aside as nothing more than novelty and he had yet to prove he was more than just another 90s hat act. That all would change here as Everywhere would go on to sell four million copies and win McGraw the respect of the industry. He was finally a force to be reckoned with at both country radio and on the road.

Lead single “It’s Your Love,” a massively successful duet with his wife Faith Hill, would take on a life of its own spending six weeks at #1 and winning boatloads of awards from the ACMs and CMAs. It would also be named Billboard Magazine’s #1 country single of 1997.

The romantic ballad, pinned by Stephony Smith, worked because the chemistry between McGraw and Hill was enough to sell the song. The nicely restrained arrangement, complete with the light acoustic guitar and organ flourishes, is also a stunning moment for commercial country in those days.

The title track would follow also peaking at #1. While not as massive a hit, “Everywhere” was even more important – it proved McGraw could sell subtlety and emotional depth through further developing the promise he showed with “Can’t Be Really Gone.” Written by Mike Reid and Craig Wiseman, “Everywhere” is easily my favorite song on the whole album and sounds as fresh today as it did back then.

I love the story here – a man’s regretting the end of a relationship and sees his ex wherever he goes – and the brilliance of the songwriting. Reid and Wiseman spend much of the song focused on the man’s travels, but smartly take a second to ground his journey with the line:

Cause you and I made our choices

All those years ago

And see you down the road

I can’t even begin to imagine how poorly “Everywhere” would be written by today’s standards (especially by the Peach Pickers). In conjunction with the lyrics, the soaring arrangement complete with fiddle, steel guitar, and gorgeous acoustic guitars nicely compliment the vastness of the many places this man has been.

The third single, the irresistibly catchy “Just To See You Smile” would match the success of “It’s Your Love” by spending six weeks at #1 and becoming Billboard Magazine’s #1 country single of 1998. The banjo driven arrangement complete with pedal steel and acoustic guitar make it one of those sunny songs you have to turn up when it comes on the radio. I love this one as well and can’t believe how good it sounds all these years later.

Fourth Single “One Of These Days” may be the best ballad of McGraw’s career. Written by Marcus Hummond, Monty Powell, and Kip Raines, it would peak at #2 in the spring of 1998. I always regarded it as a love song until writing this review – I never saw the whole picture (a man’s journey towards self-forgiveness for bullying a boy who “was different/he wasn’t cool like me”) until listening to it again this week. It’s a stunning lyric and just may be the best thing McGraw has ever recorded, let alone his best ballad.

Following the “One of These Days” juggernaut was another McGraw standard and multi-week #1 “Where The Green Grass Grows.” Written by Jess Leary and Craig Wiseman, it may be the most lyrically dumb of any of the singles from Everywhere but the fiddle and drum heavy melody are so infectious, you cannot help but sing along.

But “Where The Green Grass Grows” is actually more insightful than meets the eye. A entry into the “couturier than thou” linage, it succeeds by taking the protagonist back to small town living without hitting us over the head with grass is better than concrete imagery. His move out of city life finds him naturally following his heart.

The sixth and final single, “For A Little While” would peak at #2 in spring 1999. Composed by Steve Mandie and Jerry Vandiver along with country singer Phil Vassar, it was a simple love song about a romance not able to last more than a few months:

And I laugh every time I start to think about us

We sent that summer out in style

And she’s gone but she let me with a smile

‘Cause she was mine for a little while

She wasn’t one to be tied down – which he wasn’t looking for anyway – but he’ll always have the memories of their times together. The execution is flawless here; the fiddle, drum, and piano laced production work perfectly to frame the love story contained within.

Of the non-singles on the album, the majority are typical album filler you would’ve expected to populate a country album in the late-90s. There isn’t much there to grasp onto except for “I Do But I Don’t” written by Mark Nesler and Tony Martin, the team behind “Just To See You Smile.” The fiddle and steel guitar laced ballad is quite strong and wouldn’t have been out of place on Mark Wills’ Wish You Were Here album.

Taking another listen, it’s easy to see why Everywhere won the 1998 CMA Album of the Year award and put McGraw’s career into overdrive. The singles are some of the strongest of his career to date with not a bad one in the bunch.

I have very found memories of this project as well. Each of these songs displays a little piece of my third and fourth grade childhood. So listening to them again brings back fond memories of those years. And it’s also nice to see how well the songs have held up after fifteen years time, even if they display how sharply commercial country music has declined since.

If you don’t have a copy they can be easily found on both iTunes and Amazon.