Leave a comment Posted by Occasional Hope on May 31, 2018

Chalee’s tenure with Asylum having come to an end, another label decided to give her a chance, and she moved to James Stroud’s Dreamworks. Artistically, it resulted in her finest work, largely inspired by her own most recent divorce; but commercially it was a disaster.

The lead single, ‘Lonesome Road’, was the only single to chart, and t peaked at #54. Written by Bryan Simpson, Ashley Gorley and Melissa Peirce, it has a Celtic country-rock feel, and is an energetically delivered song about surviving against the odds.

Chalee didn’t write her next single, Phillip and Amber Leigh White did, but it feels like a very personal one. ‘Easy Lovin’ You’ is a tender ballad addressed to her daughter, recalling the difficulties and sacrifices of teenage motherhood, and the rewards:

The last attempt at a single was the album’s title track, written by Kris Bergsnes and Bobby Pinson. It is an upbeat tune with an optimistic lyric about positivity and making the most of a situation. The lyric is a bit bland, but Chalee’s delivery is infectious on a song I could imagine as a hit for an artist like Jo Dee Messina.

Chalee co-wrote three songs on the record. ‘I Am Love’ (written with Kendall Marvel and Phil O’Donnell) is quite good. ‘Believe’, written with Kelly Garrett, is pleasant and optimistic, if a little clichéd and rather poppy. By far the best of Chalee’s songs is ‘The Mind Of This Woman’, a co-write with Dean Dillon. This is an excellent closely observed depiction of a woman stuck in an unsatisfactory life.

‘I Am Pretty’, written by Buffy Lawson and Eric Pittarelli, is a sensitive story song about a woman rediscovering her dignity and making the decision to leave an abusive husband. It is one of the strongest tracks on the record.

‘Cheater’s Road’, written by Jason Sellers and Sharon Rice, is another story song, about a rich man’s neglected wife finding passion in an extra-marital affair:

‘Me And Mexico’, written by Mark Narmore and Liz Rose, is an up-tempo song about adapting well to a breakup by going on vacation. ‘More To This Than That’, written by Gary Burr and Carolyn Dawn Johnson, is a fine ballad about the a couple dividing up their possessions as they split. The record closes with Leslie Satcher’s ‘Peace’, a thoughtful song about people in desperate need of God.

This album is definitely on the contemporary side of modern country, but it is very well performed. It’s a shame it did not do better, as it seems to have had commercial potential. 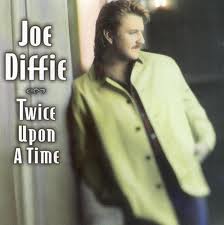 Though he did release a handful of great ballads to country radio, some of which became bonafide hits, Joe Diffie was always more successful with fun, up-tempo numbers.  By the latter half of the 90s – nearly a decade into his hit-making career – country radio had begun to cool toward even Joe’s brand of humor meets neotraditional sound.  Like the last 2 singles from Life’s So Funny, the single releases from Twice Upon A Time continued Joe’s downward spiral from the limelight at country radio. There are no top-ten hits here, and the highest showing comes from the insidious ‘This Is Your Brain’s #25 peak.  Without much support from radio, it was also Joe Diffie’s first album since his debut not to be certified by the RIAA.  Its lack of radio and retail success notwithstanding, Twice Upon A Time doesn’t deserve its status as the end-note for Joe’s short-lived glory days, and is a step above some of his other, more commercially successful albums.

‘This Is Your Brain’ is a fast-paced, partly spoken, mostly amped up romp narrated by, you guessed it, your brain. Taking the hook from the pop-culture favorite drug resistance ads ‘this is your brain on drugs’ that featured an egg sizzling in a frying pan, among other scenarios, the brain is cautioning this guy about his lack of resistance for the opposite sex. Even with repeated warnings from the body’s control center, he still falls in love and loses more than a few I.Q. points every time. The Kelly Garrett and Craig Wiseman-penned tune has its clever moments, but it’s earworm melody will cool you on those before long.

My favorite on the album, and another missed single opportunity for Joe, was the album’s superb title track. Songwriters Skip Ewing and Kim Williams paint a picture of a couple at a crossroads. Tough times have clouded both their minds with doubt, and the idea of leaving has occurred to both of them, ‘The choice is ours, the pen’s still in our hands/We can right the wrong, or we can write the end‘, Joe sings with heartbroken conviction.

‘The Promised Land’ finds a man nostalgic for the place where his roots began. The strong religious undertones between the real-life memories should have played nicely on late 90s country radio (think: ‘Holes In The Floor of Heaven’), but as the final single it barely registered at #61 on the charts.

‘Show Me A Woman’ chugs along at breakneck speed, but doesn’t offer much more than the opportunity to jam with the band. Likewise, ‘Houston, We Have a Problem’ features guitar solos that would make Brad Paisley envious, but is basically the product of a buzz-word mentality, taking the catch-phrase from the Apollo movies and attempting to build a song around it.

Joe contributed only one of his own songs this time out – a co-write with frequent collaborator Lonnie Wilson, ‘I Got A Feelin’, which was was first recorded by Tracy Lawrence  – though he did draw from the usual suspects found on his previous albums.  In addition to the title track, Craig Wiseman contributes the Bob DiPiero collaboration ‘Zero’, a much better song in the novelty format, wherein a man is counting down reasons, rights, and wrongs that lead to him being single, all to an infectious melody.  Dennis Linde’s ‘Call Me John Doe’ is a honky-tonking tale of a man who did his woman wrong one too many times.  Now he’s shivering in her freezer. Better than just album filler, any of these would were worth sending out to radio, some more than what was shipped to radio.

‘One More Breath’, written by Leslie Satcher, closes the set on a high note.  The mostly-piano lead ballad is a tender expression of gratitude coupled with a promise of never-ending devotion.  Perhaps a bit saccharine at times, it’s a well-written song that Joe delivers beautifully.  Though Joe continued to fill his albums with more schtick than substantial songs, Twice Upon A Time is an album that is more balanced between the two sides of Joe Diffie – the balladeer and the novelty-song singer – but it also offers other glimpses to a more contemporary artist with tracks like ‘Zero’ and the album closer.

Twice Upon A Time is still widely available, on CD and digitally from amazon.