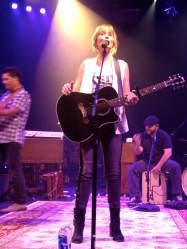 The gentle plucking of an acoustic guitar and rolling percussion fill the tent. Most turn a deaf ear to the customary sounds of house music as a concert commences. The lights were low and the stage empty, instruments waiting to be played, microphones eager to be sung into. A baby-voiced vocal adds character to the instrumentation, a singer with a distinctive bite. It’s a forty-one year old classic recording, a composition we’ve all dug into time and again. When the two-and-a-half minute ballad draws to a close, the audience erupts. The band files in and begins.

More light procession fills the tent. The sounds are different this time, subtly so, modernized with handclaps. The singer, with her sandy blonde hair back in a ponytail adorning dark jeans and a white Keith Richards tank under a white vest is handed a guitar. She makes her way to the microphone for a seemingly endless parade of “ohohohohohs” before launching into, “a friend gave me your number…”

The delicate connection between the two songs is missed, if you weren’t aware Jennifer Nettles and Butch Walker wrote “That Girl” as an answer song to Dolly Parton’s “Jolene,” which filled the air before the band took the stage. Little connections like that were the benchmark of the evening, as Nettles gifted the crowed a lengthy set that had the audience in the palm of her hand.

I’ve been fortunate enough to have seen Jennifer perform three times as part of Sugarland and she remains one of the greatest artists I’ve ever seen take a stage. Her ability to capture an audience has always been electrifying, but she was on fire at the South Shore Music Circus, a partly biased observation aided by my front-row set, a position allowing me to capture every nuance of her movement on the circular stage.

Nettles ran through the entirety of her That Girl album, weaving each track through the set like a river snaking towards an ocean. Keeping an audience engaged with songs that didn’t receive support from radio is an undertaking, but she did it by giving them context, allowing us to hear what she was hoping to achieve with each track.

This context allowed me to finally appreciate the album, which by itself can come off a bit cold. She explained the connection to 70s radio by first gifting us with a spirited take on Ambrosia’s “Biggest Part of Me” and one of Barry Manilow’s ballads before launching into “This One’s For You.”

The rest mostly got short explanations (i.e. “here’s one about…”) and all were excellent and true to form. The highlight was easily “This Angel,” a perfect excuse for Nettles to use the theatre atmosphere to allow her vocal to soar but also reduce to near whisper, silencing the audience. She paired the song about her son with “All I Wanna Do,” Sugarland’s #1 from six years ago, claiming the upbeat ode to spending time with your lover as the prequel.

Throughout the night Nettles ran through a majority of Sugarland’s hits, performing at least one song from each of their albums except, but not all that surprising, The Incredible Machine. “Baby Girl” was as infectious as always and “Stay” did its job of bringing down the house. She brought local girl Kristen Merlin, who finished fourth on The Voice this past spring, on stage for a great duet of “Something More,” which they mashed up with a snippet of Iggy Azalea’s “Fancy.” 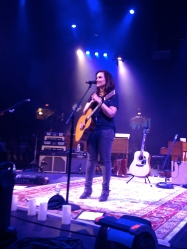 I’ve always adored her foray into covering rock songs, and at the August 8 show, she didn’t disappoint. She launched into the song with no warning, and I wailed when I figured out she was doing “Demons” by Imagine Dragons. The track is perfect for her voice and aesthetic, a meaty ballad right up her alley. She closed by encoring with “Thank You,” a perfect slice of gratitude towards the audience, and “Like A Rock.”

I’ve always found it near impossible to accurately convey my admiration for Nettles as a performer – her love of music and being on stage are so intrinsic, it’s palpable. The little things made the night – how she posed at the piano so I could take a picture of her, how she sang directly to a friend who was sitting next to me. Jennifer makes eye contact with the crowd and makes you feel like you’re a part of the show. I’m never happier than when I leave a night in her presence.

Of course, I love her even more for bringing along Brandy Clark as her opener. Clark’s set was short, but she made a nice impression. Instead of merely running through tracks from 12 Stories, Clark focused on a couple of newly written tunes and the requisite songs she’s written for other performers. “Mama’s Broken Heart” is a sweeter number in her hands, and she told the story of how “Better Dig Two” was written as a love song, not a murder ballad. She closed with “Stripes,” but my favorite moment of her set was “Hold My Hand,” a standout 12 Stories cut that showcased her voice and while I don’t love “Get High,” it worked well at the show. Clark’s only misstep was joining Nettles on “His Hands” during Nettles’ set as her microphone wasn’t working right and you couldn’t hear her too well.

Although I’m struggling to find the right words, this was easily (along with the Kathy Mattea show from 2013), the best concert of my life; a moment in time I hope never to forget. Nettles changes your life with her transcendent being and positivity. Everything, even something as kooky as giving away a guitar via Twitter during the show, just works. Nettles may’ve lost herself during The Incredible Machine era, but she’s firmly back on track now and enjoying every minute of the ride. 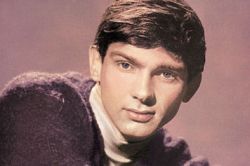 This is the fifth in a series of short articles about artists who, although not country artists, were of some importance to country music.

WHO WAS HE? : Gene Pitney was a successful singer-songwriter whose peak American success occurred during the 1960s. As a songwriter, Pitney supplied hits to a number of prominent artists including “He’s a Rebel” (The Crystals) “Today’s Teardrops” (Roy Orbison), “Rubber Ball” (Bobby Vee) and “Hello Mary Lou” (Ricky Nelson).

As a singer, Gene was a very dramatic balladeer, whose powerful voice bought the songwriting team of Burt Bacharach and Hal David to prominence with such hits as “The Man Who Shot Liberty Valence”, “Twenty-Four Hours From Tulsa” and “Only Love Can Break A Heart”. “Only Love Can Break A Heart” was Gene’s biggest US pop hit, reaching #2, kept from the top, ironically enough by the Crystals’ recording of “He’s A Rebel”. All told Gene charted twenty-four tunes in the US Hot 100 with four songs reaching the top ten.

Although Gene had considerable success in the USA, he was even more successful in the UK with eleven songs reaching the top ten including his 1963 recording of “That Girl Belongs To Yesterday”, the first ever hit for the songwriting duo of Mick Jagger & Keith Richards, and a #1 duet with Marc Almond in 1989 of “Something’s Got A Hold of My Heart”. Gene died of an apparent heart attack in 2006 while on a successful tour of Great Britain.

WHAT WAS HIS CONNECTION TO COUNTRY MUSIC? : Gene listed Moon Mullican among his early influences. Although he was raised in Connecticut, he recalled listening to the WWVA Big Jamboree on some Saturday nights.

Gene was the flagship artist for Art Talmadge’s Musicor label, which had only two consistently bankable artists in Gene Pitney and (after 1965) George Jones. Both artists were grossly over-recorded, often releasing five or more albums per year. Somewhere along the line, someone had the bright idea to record George and Gene together, releasing the records under the name ‘George & Gene’. This duo charted four songs on the country charts, the biggest being a #16 charting remake of the old Faron Young hit “I’ve Got Five Dollars and It’s Saturday Night” (it also reached the Billboard Hot 100). George Jones and Gene Pitney would record a total of seventeen songs together; however, all of their work together was in the recording studio as they never appeared in concert together.

Gene would also have another duet country chart hit, this time with another Musicor label mate, Melba Montgomery, on “Baby Ain’t That Fine”. Gene and Melba recorded several songs together.

Although Gene’s success on the country charts was limited, several of his pop classics were covered by country artists with success. Sonny James took “Only Love Can Break A Heart” to #1 Cashhbox/#2 Billboard in 1972 and in 1979 Kenny Dale took it to #7. Randy Barlow took “Twenty-Four Hours From Tulsa” to the top twenty in 1977 and several other artists had some lower places with covers of Gene’s hits, plus his songs show up as album tracks on country albums throughout the 1960s and 1970s.

There is an official website where you can find out more about Pitney and listen to samples of his music. If you’ve never heard Gene Pitney, you’re in for a treat. He’s not really comparable in style to anyone I can think of, maybe somewhere between Jackie Wilson and Roy Orbison, but unique and distinctive.

Album Review: Merle Haggard – ‘I Am What I Am’ 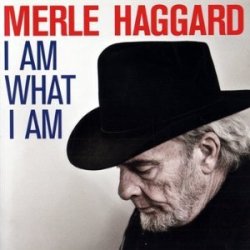 Too often in recent years, in both song and in interviews, Merle Haggard has come across as a grumpy old man who is often (and sometimes justifiably) frustrated with both the state of the nation and the music industry. His first album of all-new material in nearly five years finds him sounding less cynical and angry, less overtly political, more optimistic — and surprisingly refreshed. Incorporating a variety of sounds — from traditional country and Western swing to folk and Dixeland jazz — he doesn’t break any new ground or cover any territory that he hasn’t visited many times in the past, yet he sounds more connected to the music than he has on his past few releases. He wrote and produced all of the album’s songs, with Lou Bradley assisting as co-producer.

The Hag is joined once again by his always-stellar band The Strangers, sans Bonnie Owens who passed away in 2006 and whose presence is missed. Cast aside long ago by country radio, Merle makes no concessions to contemporary mainstream tastes. All of the tracks on I Am What I Am, Haggard’s first release for Vanguard Records, sound as though they could have been culled from his best albums of the 60s, 70s, and 80s. His voice is showing some inevitable signs of wear and tear, but for the most part he is in good vocal form throughout the album, especially in light of the fact that he underwent surgery for lung cancer in late 2008.

The album opens with “I’ve Seen It Go Away”, a Woody Guthrie-style number with a “it was the best of times, it was the worst of times” theme. He makes some social commentary, as he is often wont to do, though he makes his points more subtly here than he has in the past, taking gentle swipes at the country music establishment:

I’ve seen my share of good times come and go,
I’ve seen Bob Wills and Elvis, when they did a show.
When you’ve seen the very best, the rest can’t hardly play,
I’ve seen it, girls, and I’ve seen it go away

I’ve watched it all completely fall apart,
And I’ve seen our greatest leaders break the people’s heart.
I’ve seen most of what we’ve got have a whole lot better day,
I’ve seen it, kids, and I’ve seen it go away.

It’s somewhat reminiscent of 1981’s “Rainbow Stew”, which is largely forgotten today, but it is an important song to me personally, since this is the song he had on the charts around the time that I became interested in country music.