Leave a comment Posted by Occasional Hope on March 23, 2016 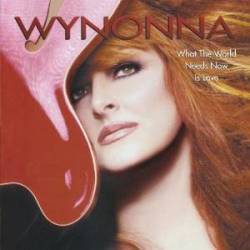 Released in 2003, What the World Needs Now was Wynonna’s debut for Curb/Asylum after cutting ties with Mercury. Wynonna produced most of it with Dann Huff, and there is an overarching theme of vaguely uplifting spiritual encouragement, but with little in the way of country music. She had reportedly been planning on making a straight soul record, but decided, perhaps at the promptings of her record label, to at least pay lip service to still being a country artist.

The bluesy title track with a touch of gospel is competently performed but not country at all (apart from the rustic banjo introduction, which seems to belong to another song, and is soon swallowed up by all the other instrumentation). Country radio treated it with some scepticism, and it peaked at #14, marking Wynonna’s last top 20 hit. The follow-up, ‘Heaven Help Me’, is a classy AC ballad, with a spiritual edge, and beautifully interpreted with a tender vocal. It just crept into the top 40, but is much better than its predecessor, although the orchestral arrangement is a bit too much.

A dramatic cover of the rock ballad ‘I Want To Know What Love Is’, produced by R&B producer Narada Michael Walden and featuring rock guitar hero Jeff Beck, has absolutely no country elements, and perhaps represents the original plan for the album. Unsurprisingly, it won no country airplay, but it was a top 20 hit on both Adult Contemporary and Dance charts. The dance remix is tacked on as a ‘bonus’ track; it is quite unlistenable for me, but makes the other version sound much better in comparison. The only other track surviving from these sessions, ‘Who Am I Supposed To Love’, is a decent soul ballad, but a long way from country.

The final single ‘Rescue Me’, promoted to AC and Christian radio, failed to chart anywhere, and falls somewhere between gospel and Christian Contemporary. It was written by Katie Darnell, a terminally ill 17 year old, and had previously been recorded, but not released, by John Rich.

Most vaunted at the time of the record’s release was Wy’s reunion with mother Naomi on ‘Flies On The Butter (You Can’t Go Back)’. The third single, and Wynonna’s last solo top 40 country hit, it is charmingly nostalgic. The song was written by Chuck Cannon, Allen Shamblin, and Austin Cunningham, and is the album’s most convincingly country moment. Although it is billed as a duet, Naomi really only contributes harmonies on some lines.

‘Sometimes I Feel Like Elvis’, written by Derek George, Neil Thrasher, and Bryan White, is about longing for love rather than all the meaningless material goods remaining after a failed marriage, and the lyric is interesting although the melody and arrangement are pedestrian. It leads into a strong cover of the real Elvis’s ‘Burnin’ Love’ which was previously released on the soundtracks of the animated movie Lilo And Stitch. This is highly enjoyable.

‘I Will Be’ is a powerfully sung big ballad which isn’t a bad song underneath, but is heavily over-produced and pop rather than country. ‘Your Day Will Come’ is more contemporary country, and quite well done but a touch bland. The rocker ‘(No One’s Gonna) Break Me Down’ is rather busy with everything imaginable thrown in, including some nice honky tonk piano but too much in the way of electric guitar on top.

The black gospel-influenced ‘It All Comes Down To Love’ is partly spoken and too loud for my taste, but would appeal to fans of that style of music as it is powerfully performed. ‘It’s Only Love’ is in the same vein.

‘You Are’ had appeared on the soundtrack of one of her sister Ashley’s films a few years earlier. It’s rather bland and forgettable with some odd effects in the arrangement.

I like the album better than Revelations, which didn’t do anything for me, but not as much as he first two solo efforts. Wynonna is a great singer, and sings with conviction throughout, but her musical spectrum is wider than mine. This is not a bad album by any means – in fact it is rather a good one. It just has very little for country fans. Diehard Wynonna fans will love it regardless.