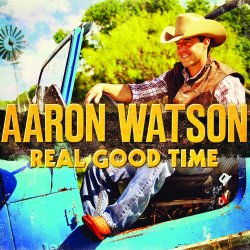 I am a big fan of Texas country singer Aaron Watson, and a new record from him is always worth hearing. The recording and completion of this latest release was understandably delayed by the personal tragedy Aaron and his wife suffered with the loss of their baby daughter a year ago, but sad songs are at a minimum here. The experience was clearly too painful to replay in music at this time, although he has written movingly about the loss in prose.

There are 18 tracks and an hour’s playing time, but sometimes less is more. In this case at least on first listen the setlist felt a bit too long with too many forgettable songs at a similar medium tempo, particularly at the start of the record. However, they almost all grew on me after a while. The rapid-fire title track is not that memorable but has an attractive instrumental lead-in, nice fiddle, and enjoyable groove which make it worthwhile. ‘Lips’ is a pleasant love song’, but ‘Summertime Girl’ (about memories of a past fling) is quite forgettable.

Among the other slow-growers, ‘Turn Around’ is a comforting religious number, offering hope to the troubled:

It took a few listens to get into but I did warm to its positive message.

The mournful, fiddle-dominated ‘July In Cheyenne’ is a suitably downbeat response to the story of a rodeo rider who is killed in competition.

Six songs in, a cheerful cover of ‘Cadillac Cowboy’ (written by Chuck Pyle, and previously recorded by Chris Ledoux but first recorded by the Nitty Gritty Dirt Band as ‘Other Side of The Hill’) is the first song to really pick up the tempo. It is a duet with Justin McBride (one of many guests on the record.)

Aaron duets with Elizabeth Cook on the ballad ‘Leather And Lace’, which was written by pop star Stevie Nicks for Waylon Jennings and Jessi Colter’s album of that title (but ultimately dropped from the set list). It doesn’t sound very country but is quite pretty and mellow. Fellow Texans Pat Green and Josh Abbot join in on the Outlaw styled ‘Texas Boys’, celebrating and lamenting the life of travelling musicians and their long suffering wives, citing Waylon and Willie and set to a typically Waylon beat. Kevin Fowler and veteran country star John Anderson are featured on the novelty ‘Deer Blind’. It is always great to hear the distinctive Anderson, one of the few non-Texans to appear, but he seems wasted on this.

Another duet, ‘Off The Record’, sung with Texas country singer Charla Corn, is the best new song on the album . This excellent downbeat song is set in the aftermath of a failed marriage with the protagonist sharing his feelings about what has gone wrong and what feelings still remain despite it all.

Lead single ‘Raise Your Bottle’ pays tribute to old soldiers and the prices they have paid. Continuing the theme, Aaron throws in yet another version of his masterpiece, ‘Barbed Wire Halo’. While this is a genuinely great and moving song which deserves to be widely recognised as a modern country classic, this is at least the fifth time he has recorded it and this version feels a little perfunctory compared to earlier ones. If you haven’t heard the song, listen to it  and then download it.

Country-rock ‘Reckless’ (which Watson has also recorded before) sounds rather like a filler album track on a Kenny Chesney album, and is one of the more disposable moments. Another repeat offering is ‘Honky Tonk Kid’ but at least this rings the changes by bringing in guest Willie Nelson, who suits the elegy for a country singer perfectly.

The catchy ‘Fish’ is quite entertaining with sprightly fiddle, while ‘Nowhere Fast’ has a pleasantly jazzy, loungy feel.

I liked the wry kissoff song, ‘I Don’t Want You To Go’ as Aaron addresses the kind of woman who is serious bad news when it comes to a long term relationship:

‘Hey Y’all’ is mischievously subtitled “my contribution to ruining country music country song! Ha!’ It is a parody of all those “I’m country” songs set to non-country rhythms, with every rural Southern cliché imaginable packed in. It is very cleverly done, but hard to listen to as the sound is so horrible. It is so sharp and accurate, I can imagine some people taking it as a serious attempt at meeting today’s market.

Another disappointment comes with the packaging. Liner notes are minimal, and there are no songwriter credits included.  Overall, though this is definitely a worthwhile purchase.