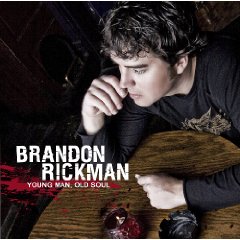 Brandon Rickman is a very talented bluegrass singer and guitarist, with a grittily soulful voice which is very distinctive. Although this is his debut solo album (on the always-admirable Rural Rhythm Records), he has spent some time as lead singer for the Lonesome River Band. Rickman co-produces with Jimmy Metts, and they have made a record with a surprisingly full acoustic bluegrass sound, despite the small number of musicians; many tracks just feature Brandon’s voice and guitar, although others feature members of the Lonesome River Band and other musician friends. Brandon also co-writes almost all the material.

The album immediately seizes attention with the arresting opening track, ‘Always Have, Always Will’, an excellent song which Brandon wrote with Chris Stapleton of the SteelDrivers. This portrays a man who cannot stop drinking and lives with the cost, as he declares his undying love for the woman who could not live with it:
“I’ve fought it time and time again
But the whiskey always wins
I got regrets I try to kill
I always have and I always will …
I know the Devil way too well
But I knew the price when I made the deal.”
The song is well complemented by the arrangement, with some fine playing, especially from Aaron McDaris on banjo and Jenee’ Fleenor on fiddle.

Two songs are written with Craig Market. ‘Here Comes That Feeling Again’ is a rather good country song about a love that should be over, but somehow keeps sneaking back into his heart “out of nowhere, out of thin air, it just comes rolling in like an old song”. Even better is ‘What I Know Now’, a thoughtful reflection on past mistakes and growing up, delivered very simply, just Brandon and his guitar:
“I don’t like to dwell on what I’ve done wrong in my life
Chalk it up to being young and full of youthful pride
You can’t go back – and I know that – but if I could, somehow,
I might’ve stayed a little longer, loved a little stronger, done right where I done wrong
If I knew then what I know now.”
Another introspective take on growing older comes with ‘So Long 20s’ as Brandon hails turning 30, again in very low-key style. He wrote this song with one-time Lyric Street country act Kevin Denney, and shares feeling which will be all-too-familiar to most of us:
“The older I get, the more I’m afraid
It’s not my age that scares me, it’s how fast I got here …
Seems like I laid down, took a nap around 18
Woke up this morning like it was all a dream.”

Buddy Owens helped Brandon write the less interesting ‘Wide Spot In The Road’, about a small hometown. I preferred the similarly themed ‘I Take The Backroads’, written with Jerry Salley (who also contributes harmonies), which has the protagonist returning home to a town which has changed out of recognition, thanks to a new freeway. Salley also co-wrote (with Brandon and Justin David) the regret-filled tribute to a prodigal’s loving mother, ‘Wearing Her Knees Out Over Me’, which is one of my favorite tracks.