Album Review: Diamond Rio – ‘I Made It’ 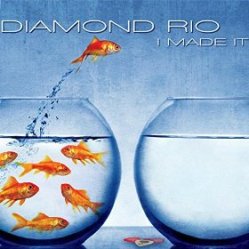 It has been several years since Diamond Rio were last in the studio, and more since they made a country record (their last effort was a Christian Contemporary effort which lacked the band’s signature harmonies). Their self-released return was an unexpected surprise.

Unfortunately, a couple of songs in, I was wondering if they had lost the plot completely. The opening ‘I Love This Song’ is a piece of mid-tempo fluff which would be bearable if forgettable, but is marred by bizarre vocal interjections; it was previously an unsuccessful single for its co-writer Marcel. ‘Ride The Range’ is a weird self-indulgent experimental melange; it has country instrumentation, but does not sound country structurally or melodically , with semi-spoken vocals and a rudimentary lyric. I strongly disliked it, and scheduling the record’s worst songs at the start unbalances it as a whole. Luckily, things improve.

The pop-country ‘Crazy Life’ is not very interesting, despite a perky arrangement, with oddly syncopated vocals. ‘Lay Your Lovin’ On Me’ has a similar bouncy feel but is much catchier and more entertaining, and I rather enjoyed it.

The title track is much better. Co-written by band member and album producer Jimmy Olander with Josh Shilling and Michael Dulaney, it is a charming ballad reminiscing about Olander’s arrival in Nashville as an aspiring musician, which turns half way through into an AC-leaning love song to his wife. The romantic ‘I Can’t Think Of Anything But You’ (a Skip Ewing co-write) is a cover of a song formerly recorded as a duet by Sammy Kershaw and Lorrie Morgan, and is quite nicely done.

The album’s outstanding song does see the group back at their best. ‘Beckett’s Back Forty Acres’ is a delightful story song with an acoustic arrangement, about a local farmer who makes it big by a secret (and illegal) crop – but eventually gets hauled away by the police. Ashley Gorley, Michael Rossi and Hugh Bryan Simpson wrote the song, and this track is well worth downloading.

The love song ‘If You’re Willing’ is typical Diamond Rio mid-tempo fare, an enjoyable track written by Jason Sellers and Stewart Harris. ‘I’ll Wait For You’ is also quite attractive.

‘Findin’ My Way Back Home’ was the single released from Lee Ann Womack’s ‘lost’ unreleased album in 2006. LAW’s version of the Craig Wiseman/Chris Stapleton song had something of an Americana-meets-pop feel to it which didn’t really work. The Diamond Rio version is a bit more more organic, and more successful.

The beautiful ‘Walking By Beauty’, written by Patrick Jason Matthews and Jason White, was inspired by an experiment undertaken in 2007 by acclaimed classical violinist Joshua Bell, when he busked in a Washington DC Metro station to see who would pay attention. Bell guests on the track, whose profits are devoted to the doTerra Healing Hands Foundation.

This is definitely a mixed bag, but on the whole the good outweighs the bad.