Tracy’s debut album in 1991 was a solid example of the neotraditional sound which was sweeping country music at the time. Smoothly produced by James Stroud, this album epitomizes the style, mixing traditional country with plenty of fiddle and steel with a radio friendly feel. Tracy was only 23, but had a natural country voice and sounds mature and confident beyond his years.

The title track, written by Elbert West, was the record’s lead single, and perhaps helped by the publicity of Tracy’s shooting, it raced to #1. A sincere and believable vocal sells an excellent song about a man who offers to let his ex take all their material possessions, as nothing matters as much as his broken heart,

The regretful ballad ‘Today’s Lonely Fool’ (written by Kenny Beard and Stan Paul Davis ) reached #3, and is another fine song in classic country style, with the jealous husband learning from his mistakes and begging for a second chance.

The enjoyable up-tempo ‘Runnin’ Behind’ is a young man’s cheerful response to living on the edge, with not enough money or time. It peaked at #4.

It was followed by my favorite of the singles, which approached the same hard times theme from a more mature angle, and became Tracy’s fourth top 10 hit. ‘Somebody Paints The Wall’ had previously been recorded by Curb artist Josh Logan and (as ‘Somebody Always Paints The Wall’) by George Jones, on the album which also contained the original (and best) version of ‘Ol’ Red’. The song is a wry look at living with regular financial disaster, but with a loved one standing by him, the protagonist is going to be okay, even though

The rival versions are both more downbeat, with George Jones having the most emotional depth and melancholic feel, and Lawrence does come across a little lightweight in comparison, but it is still very good.

Tracy wrote two songs on the album. ‘Dancin’ To Sweet Seventeen’ is a surprisingly convincing song from the viewpoint of a jaded 30-something clinging to dreams of a high school romance. His other composition was a co-write with Elbert West. The protagonist of the fiddle-led lament ‘Froze Over’ bemoans losing his “angel”, who

There are another couple of ballads with appealing melodies. ‘Between Us’ is a pleasant love song, while ‘April’s Fool’ is another sad song about a man hopelessly in love.

The tongue-in-cheek hillbilly ode to ‘Paris, Tennessee’ as a romantic destination is quite entertaining, with banked backing vocals giving the up-tempo romp a breezy feel. It was later recorded by a pre-beach Kenny Chesney on the latter’s All I Need To Know, with a virtually identical arrangement.

In the closing ‘I Hope Heaven Has A Honky Tonk’ , the protagonist is hoping for an afterlife

With, of course, some live country music. Bob Wills is said to be present in person, but Hank Williams only on the divine jukebox; one hope this isn’t a comment about the likely destination of the latter.

It is easy to find cheap used copies of this promising debut album, and it’s worthwhile doing so. 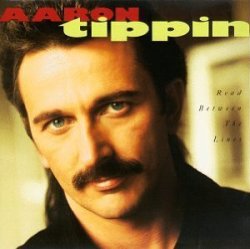 By 1992 Aaron Tippin was well on his way to becoming a one-hit wonder when his second and third singles tanked at country radio. On the surface, he seemed to have a lot of things working against him: he was slightly older than most new artists and had more twang in his voice than was generally considered commercially viable, even in those days. He also lacked the chiseled good looks that were important in a genre that was becoming increasingly image conscious.

Tippin’s commercial fortunes changed with a song about a car that, with the notable exception of its entertainment system, was a pile of junk. The catchy “There Ain’t Nothin’ Wrong With The Radio”, which he co-wrote with Buddy Brock, was tailor-made for radio and quickly shot to #1, becoming his first chart-topper. It was released one month in advance of his sophomore album, Read Between The Lines, which like its predecessor, was produced by Emory Gordy, Jr. He followed this success with “I Wouldn’t Have It Any Other Way”, which could have been titled “You’ve Got To Stand For Something Redux”. It’s a decent but not terribly original, as it is sonically and lyrically very similar to his first hit. Nevertheless, it reached the Top 5.

Aaron stumbled a bit with the album’s third single, “I Was Born With A Broken Heart”. It only reached #38, though it outperformed Josh Logan’s original 1989 version. Like all of the songs on Read Between The Lines, “Broken Heart” is a Tippin co-write. I consider it to be the weakest of the album’s four singles. “My Blue Angel”, though a bit shallow lyrically, was more radio friendly and returned Tippin to the Top 10. It’s less traditional than the rest of the album, but with a voice like Aaron Tippin’s pretty much anything sounds country.

RCA missed an opportunity by not releasing as a single the ballad “If I Had It To Do Over”, which is my favorite track on the album. I also quite like the upbeat honky-tonker “I Miss Misbehavin'”, a co-write with Charlie Craig and Mark Collie in which Tippin takes a nostalgic look back at his younger hell-raising days.

I have to admit that I didn’t pay a whole lot of attention to Aaron Tippin during his commercial heyday. I enjoyed most of his radio hits but not enough to make we want to buy any of his albums. Listening to the entire album for the first time more than twenty years after its release, I realize how easy it was in the 90s to take for granted an album like this, which may not have been one of favorites at the time, but would be extremely welcome if released today.

Kentucky-born Josh Logan was one of those artists who fell through the cracks of a major (or almost-major) label deal when he was signed to Curb in the late 80s. His excellent 1988 album Somebody Paints The Wall included the first version of the title track, later a big hit for Tracy Lawrence and also recorded by George Jones, and Aaron Tippin’s ‘I Was Born with A Broken Heart’. Another early single was pulled when Conway Twitty released the same song. For whatever reason, Josh Logan never made any impact at radio, and was unceremoniously dropped by Curb. He has released a handful of independent albums in the years since, and the latest has just come my way.

Josh has a big deep baritone voice which could never be anything but country. His approach is normally solidly traditional, but this album is unfortunately produced by Del Gray, drummer for the group Little Texas, and I’m afraid I’m not over-impressed by Gray’s production skills, as the sound is a little muddy at times. The vocals are good, though, and some of the songs are excellent, making this a worthwhile purchase overall.

Josh is not a songwriter himself, but producer Gray has provided some of the material himself. Regrettably, some of these are the most dispensable and lyrically cliched moments on the record, such as the forgettable ‘I’d Be Good At Lovin’ You’. The unconvincing southern rock/outlaw posturing of the title track gets the set off to a disappointing start, as this is just not a style suited in any way to Josh’s voice. The worst of Gray’s songs is ‘BFE’, an overproduced and boring paean to the country lifestyle whose hook is incomprehensible. There are 13 tracks on the album, so cutting these three would have been a much better decision.

As a writer, Gray redeems himself with two offerings, both co-written with Zack Turner. ‘Old Die Hards Like Me’ lauds the honky tonk lifestyle to a slightly melancholy tune, and I thoroughly enjoyed honky-tonker ‘The Path Of Least Resistance’, which is, of course, “straight down to the bar” when love falls through. Neither song breaks any new ground lyrically, but they are both enjoyable. The same goes for ‘Dead & Gone’, a song about the appeal of country music written by another Little Texas member, Porter Howell, with Paul Jefferson and Johnny Slate – you’ll know it’s dead, Josh sings in rather melancholy tones, when no one falls in love or walks the floor with a broken heart – or when Hank Williams is no longer played on AM radio. It is not quite clear how ironic the lyric is intended to be.