Leave a comment Posted by Jonathan Pappalardo on October 2, 2014 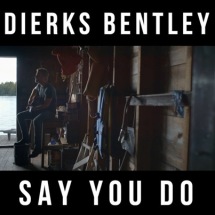 “Say You Do” is a throwback to the type of fare the endured Bentley to radio listeners in the last decade, the type of song focused on his relationship with his woman; not his bros or a beer bottle. Joseph Hill, Shane McAnally, Trevor Rosen, and Matt Ramsey have composed an effecting lyric while Bentley supplies the perfect amount of desperate urgency to bring the story to life.

When I first heard “Say You Do” through the track’s music video, I was taken aback by the stark opening, Bentley’s voice framed by lush instrumentation. The current climate of country radio would never touch a song so elegantly constricted so I was almost begging the backing track to pick up, and fill out.

It isn’t every day you desire a more cluttered production, but when Bentley turns in this strong a vocal on a song so firmly against all popular trends, you want it to have every chance of succeeding. Producer Ross Copperman does his job, but ultimately drowns the track with so much noise, it’s all Bentley can do just to keep his head above water. That the listener can still feel his urgency through the muck attests to Bentley’s acute skills as a vocalist.

So we’re not graced with the second coming of “Settle For A Slowdown,” “Long Trip Alone,” or “Draw Me A Map.” But at least Bentley seems heading back in that direction, full steam ahead.

Progress is progress. I’ll take it.