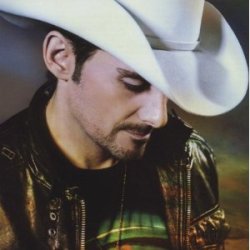 Brad Paisley was our Spotlight Artist last November, and he has produced some outstanding material in the past. His last few releases, however, have been on a downward spiral, and sadly his latest release accelerates the trend. He cowrote almost all the material with a variety of partners, most often including Kelley Lovelace and/or Chris Dubois. To be frank, he would have been well advised to look elsewhere, because so much of this is just plain uninspired.

Thhe three outside songs provide the most worthwhile tracks. The spiritual ‘Life’s Railway to Heaven’ former is the record’s sole nod to the traditionalism which marked Brad’s early career, and features guest vocals from Marty Stuart, Sheryl Crow and Carl Jackson. ‘A Man Don’t Have To Die’, written by Rivers Rutherford, George Teren and Josh Thompson, is the album’s highlight for me, although the story’s set-up is not as well set up as it might be. The song is largely addressed to a preacher, “new around here”, but it isn’t clear what he’s been saying to his flock to prompt this response:

The body of the song is much more effective, with its depiction of the hell on earth of being laid off by a ungrateful employer, “six months short of 30 years“, struggling to repay a mortgage, or a broken marriage. The chorus has effective harmonies, but the track is marred by out of place and very irritating wordless backing vocals in the second half possibly intended to be the voices of angels.

The charmingly playful ‘Toothbrush’ (written by Joel Shewmake, Jon Henderson and Danny Simpson) details the growth of romance, and this track boasts an imaginative arrangement which makes it the best sounding track on the record. Brad’s composition ‘Eastwood’ is a rather good atmospheric Western style instrumental with Clint Eastwood adding a few words at the beginning and end. Brad’s little boys gurgle a few words as well, and are less irritating than most intrusions of child voices.

None of Brad’s songs here is up to the standard of his earlier work, but I still quite like the title track’s tribute to the inclusiveness of country music, which I reviewed last autumn – at least until it collapses into an uninspired litany of (much better) song titles. The current hit, ‘Old Alabama’ is a fair tribute to the band of that name, but far less effective as a song in its own right, even when Randy Owen joins in, and it is over-produced to boot.

Also acceptable is the rueful ‘I Do Now’ which has the protagonist looking back at his wedding and regretting breaking the promises he made then. It starts out very well indeed, with an understated regret imbuing the first verse, but the chorus is predictable and the later verses don’t take us anywhere unexpected. ‘New Favorite Memory’ is a pleasant but slightly dull evocation of domestic bliss. The affectionate wedding-set ‘Love Her Like She’s Leavin’’, complete with advice (from the bride’s Uncle Bill) of how to keep the relationship going, has a very pop-influenced melody and a pleasant but cliche’d lyric. The Eagles’ Don Henley sings harmony.

On a similar theme, the new single ‘Remind Me’, the duet with Carrie Underwood (reviewed recently by J.R. Journey) is actually a pretty good song about a couple longing for the sweetness of the early days of a love affair which has become a stale marriage, but Carrie oversings her parts, sounding too intense where the lyric seems to call for wistfulness, and overwhelms Brad when they are singing together, while the track is too heavily produced. It will probably be a monster hit.

‘One Of Those Lives’ is a well-meaning and earnestly sung pieces comparing the protagonist’s petty problems with more serious ones faced by others, but it is awkwardly phrased and generally feels a bit forced, and I don’t care for Brad’s ventures into a falsetto.

Brad includes his usual brace of songs intended to be funny but which don’t raise a smile. Of these, the silly novelty ‘Camouflage’ with yelled call-and response backing vocals reminiscent of Joe Diffie’s worst moments at least makes an impact, if not a positive one. The Mexican vacation-set ‘Don’t Drink The Water’, a duet with Blake Shelton, falls completely flat and is a waste of both men’s talent. ‘Working On A Tan’ is a boring beach song which sounds very poppy with Beach Boys style harmonies. ‘Be The Lake’ is equally dull, as Brad leches over his love interest.

This is a disappointing offering from an artist who seems to have run out of steam creatively. Unless he manages to recharge his batteries, I suspect this will be the last Brad Paisley album I’ll buy.