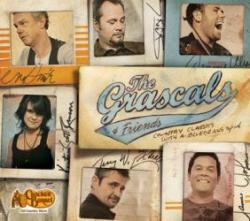 The Grascals are one of the most talented current bluegrass lineups, and their four albums to date have been gaining them increasing amounts of attention. The band’s singers are not among my favorite bluegrass vocalists, but their instrumental prowess is exceptional. They have already worked extensively with discerning country artists like Dierks Bentley and Dolly Parton. This side project, recorded exclusively for Cracker Barrel, consists, as the title promises, of the Grascals’ selection of classic mainstream country songs given a light bluegrass flavor, with a number of guest stars helping out on vocals. Fiddler Jeremy Abshire and banjoist Kristin Scott Benson stand out most for me, but all the musicianship is flawless, with not a note sounding out of place or misjudged – the perfect combination of virtuosity and taste.

Most of the songs are duets with the guest vocalist generally opening and one of the Grascals’ lead singers taking over halfway through. Guests range from some of the more traditionally rooted of today’s stars to veteran acts on their own classics.

Brad Paisley is entertaining on a committed version of the Buck Owens classic ‘Tiger By The Tail’ which opens the set brightly and is one of my favorite tracks. I also really enjoyed Dierks Bentley guesting on ‘Folsom Prison Blues’, although I would have preferred him to sing lead throughout rather than sharing the role, which seems to make the lyric less convincing by not being a single man’s story. The least successful cameo comes from Joe Nichols, whose music I usually like, but who sounds rather limp on ‘Mr Bojangles’ (not one of my personal favorite songs anyway, which may color my appreciation of this version).

Darryl Worley appears on the second verse of a fast-paced and playful ‘White Lightning’ which sounds as though the band had great fun recording it, and it is equally enjoyable to listen to. Country and bluegrass get some added Cajun spice with a lively take on ‘Louisiana Saturday Night’ (a Bob McDill song about down-home partying on the bayou and was a hit for Mel McDaniel in 1981), which is perfectly fine without any star guest. However, a Hank Jr medley of ‘Born To Boogie’ and All My Rowdy Friends Are Comin’ Over Tonight’ could have done with a guest to add some passion, as the treatment is just far too mild – neither boogieing nor rowdy in even the slightest degree. The instrumental backing is as attention-grabbing as ever, though.

Singer-songwriter Tom T Hall has been working in bluegrass for some years, and here he sings his ‘The Year That Clayton Delaney Died’. His voice has audibly aged, but it works well in the context of this warmly reminiscent tribute to a childhood influence, and the cut is absolutely charming. Charlie Daniels sounds even more grizzled on ‘The Devil Went Down To Georgia’, but the band sound a little too polite vocally backing him up, although the playing definitely has the requisite fire. The Oak Ridge Boys contribute vocals on their Rodney Crowell-penned hit ‘Leavin’ Louisiana In the Broad Daylight’ (one of the more unexpected song choices), and while this works well in its new incarnation, it isn’t one of my favorite tracks.

Dolly Parton harmonizes beautifully on her own (and Porter Wagoner’s) ‘Pain Of Lovin’ You’, which works perfectly as a bluegrass song. Dolly also guests on the single which has been released to publicize the project, ‘I Am Strong’, the only original song included (apart from a nice rhythmic instrumental, ‘Cracker Barrel Swing’). Written by the Grascals’ Jamie Johnson with his wife Susanne Mumpower-Johnson and Jenee Fleenor (currently Terri Clark’s fiddle player), it has a very pretty melody, and heartfelt lyric, sung with great soulfulness and emotion. I have to admit that if I were diagnosed with a serious or fatal illness, my own first impulse would not be to talk about how strong I felt, and I don’t think I would even want to be, so the song’s message doesn’t quite speak to me personally. Having said that, it is an attitude which does help many people, and it appealed to the Grascals enough that they recorded the song twice here, once with Dolly, then reprised at the end of the album with an all-star cast including most of their other guests, Terri Clark, Randy Owen and (bizarrely) action star Steven Seagal. (It would, incidentally, have been nice to have had a full duet with Terri on the record, as the choice of guests is rather male-dominated.) I actually found this version with everyone swapping lines more effective and moving than the earlier version, with more of a sense of universality.

Both versions are emotive in the right way, with a real sense of hope. Both end with a few lines delivered by a three-year-old patient at St Jude’s Children’s Hospital in Memphis, which inspired the song’s composition. Fittingly, a share of the profits of the album go to the hospital.