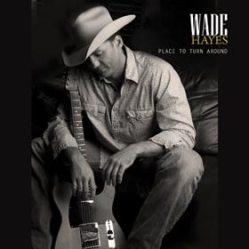 Wade Hayes was one of the more underrated of the 90s neotraditionalists, scoring only six top 10 hits in his career. I always liked his melancholy-tinged voice, and I was pleased to find he has released his first album in nine years. It’s very much an independent effort, with Wade writing or co-writing almost all the material and playing acoustic and electric guitar, and Wade has released it himself.

It opens a little disappointingly with ‘Good Day To Go Crazy’. The song itself (co-written with Jerry Salley and Jenny Farrell, both of whom contribute backing vocals on the album) is fine, as the protagonist suggests he and his woman take a break from everyday life, but Wade’s voice is too low in the mix. Luckily, things pick up immediately with the charming ‘The Best Part’, written with Michael White and Carson Chamberlain, although the production is a bit heavier-handed than I would like. Wade offers some cogent advice from his father in the aftermath of a failed marriage:

“Something special grows when two people know
They won’t run when things get hard
If you only want the good time
You’re gonna miss the best part.”

White also worked with Wade on the despairing plea to God, ‘What’s A Broken Heart To You’, which I really like, although I would have preferred a more stripped-down production without the electric guitar solo. Better-sounding, although breaking no new ground lyrically, is the tender ‘God Made Me (To Love You)’, which Wade wrote with Trent Jeffcoat and Roger Springer. Springer also wrote (with Ward Davis and Wade) the bouncy ‘Right Where I Want You’ as a former commitment-phobe gets well and truly caught by a woman “smart enough for the both of us”, who has got him “right where I want you all the time”. Equally entertaining is the cheery western swing of ‘Every Time I Give The Devil A Ride’, written with Jerry Salley and Jim McBride, with its metaphorical look at giving in to temptation.