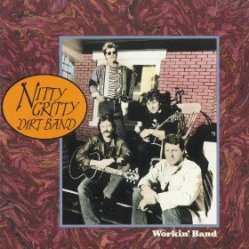 With the release of 1988’s Workin’ Band, The Nitty Gritty Dirt Band began to wind down its most commercially successful decade. It was the band’s final “regular” album of the decade and its last for Warner Bros.; the following year’s album and their Universal debut would be the much-acclaimed and guest star-studded Will The Circle Be Unbroken?, Volume II which we reviewed in April 2009 .

Like the previous year’s Hold On, Workin’ Band was produced by Josh Leo. It produced three Top 10 singles, beginning with “Workin’ Man (Nowhere To Go)”, a #4 peaking hit that despite its uptempo arrangement, dealt with the plight of American farmers who were displaced after losing their farms at auction. It was followed by another uptempo, radio-friendly number “I’ve Been Lookin'”, which reached #2. Both songs were penned by band members: Jimmie Fadden wrote “Workin’ Man” and Jimmy Ibbotson and Jeff Hanna penned “I’ve Been Lookin'”. The third single, “Down That Road Tonight” was written by Jeff Hanna with Josh Leo and Wendy Waldman. My least favorite of the three singles, “Down That Road Tonight” contains just a hint of the blues. It reached #6 and marks the second-to-last time The Nitty Gritty Dirt Band would score a Top 10 hit (“When It Goes” from the Circle II collection became their final Top 10 in 1990).

Two of the album’s tunes were later covered by other artists. Holly Dunn released a very similar version of “Thunder and Lightnin'” a year later and Lorrie Morgan recorded a much slicker version of “Soldier of Love” in 1996, which pales in comparison to NGDB’s rendition.

Band member Bob Carpenter contributed two of his original compositions to the project: “Baby Blues”, a co-write with Wendy Waldman and “A Lot Like Me”. Both are departures from the band’s usual sound. Carpenter takes over as lead vocalist and though he is not as gifted a singer as his bandmates, he is effective on both tunes, particularly the rock-infused “A Lot Like Me”, that I liked a lot more than I expected to.

Workin’ Band was always one of my favorite Nitty Gritty Dirt Band albums. I bought it on cassette when it was released in 1988, but never upgraded it to CD. Consequently, I had not heard it in a very long time, but it has held up surprisingly well and I found that I enjoyed it as much as I did over quarter-century ago.