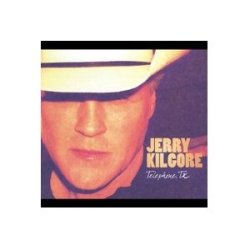 Jerry Kilgore enjoyed a short major label career just over a decade ago with the top 40 hit ‘Love Trip’ but is probably better known as co-writer of Tracy Byrd’s hit ‘Love Lessons’. His excellent 2007 self-release Loaded & Empty got him some attention, and has now been followed up with another fine record.

The steel-drenched production (by the artist with James Mitchell) has only fiddle missing from the pure country mix and is an aural delight with a relaxed Strait-style feel on much of the material. Jerry’s voice isn’t the most distinctive, but it is nice and he has mature, lovely phrasing. The songs were all written or co-written by Jerry, and are all pretty solid lyrically, while he has a great knack for writing melodies, and there is a good mix of moods and tempos.

It opens well with ‘Can’t Hide A Heartache’, an excellent song offering sympathy and hope for the future to a heartbroken woman. The advice is backed up by the personal experience given in the ensuing song, the mellow ‘Life Goes On’, about getting over someone, with time having done its healing job and the worst now well in the past.

‘Places To Go’ has a similar slow laid back and faintly melancholic feel and insidiously attractive melody, portraying a restless drifter not quite sure what he is ultimately looking for, as he admits he “might be looking for something that just can’t be found”. But he’s moving on anyway,

Cause I got places to go and people to leave
The highway is callin’ my name as we speak
I’m not one to quiet the call of the road, don’t you know?

Randy Kohrs provides backing vocals on ‘Leavin’ Feelin’’, another tale of a serial leaver who gets a “cold lonesome feeling” whenever permanency is on offer, set to a lovely tune with plenty of steel guitar. Elsewhere, we learn the perils of sticking around after breaking someone’s heart, especially living in a small town where ‘Everybody Knows Me’, not to mention the girl. The mournful ‘The Truth’ looks at the reasons behind a breakup:

People will believe what they want to
No matter what you say or do
There’s three sides to every story
Your side, my side and the truth

‘If Ya Wanna Keep Your Beer Cold’ is a sardonic honky tonker, warning against a beautiful woman in a bar:

A similar jaundiced mood appears in the amusing irony of ‘Born Rich’:

How in the world did he get her?
A strange little dude with a beautiful girl
Bet his daddy’s got money
Bought him the car that he drives
Bank account the size of Texas gets ‘em every time

Here’s a guy like me sittin’ here all alone
Hell, I can barely pay my bar tab
Got nobody I’m takin’ home
But I caught her lookin’ at me
While she’s a-hangin’ all over him
Who’s she tryin to fool?
We all know what it is
Wish I had been born rich
Instead of so damn good lookin’

Someone like Toby Keith could have a big hit with this song.

The enjoyable self-confident swingy ‘Do My Own Thing’ is about being comfortable with yourself even if it isn’t “the in thing”. ‘Ain’t On the Menu’ is a cute love letter to a waitress the bashful protagonist has had a crush on for the past year. ‘Right Where You Belong’ is a mellow love ballad set just after the couple have spent their first night together.

In ‘Cinnamon Bay’ the protagonist is ready for a change of scenery and invites his sweetheart along to a beach trip. It’s pleasant with a pretty melody, and while the lyric is nothing special, it’s nice to hear a beach song that actually sounds country.

The memorable title track is quite different from the rest of the record, a sexy southern gothic story song about an illicit affair with a married woman. Jerry growls it out, using the lowest part of his vocal register, and giving ist a sense of urgency and impending doom, although the secret is still in the bag as we end the song.

Gonna Telephone, Texas, just as fast I can
There’s a woman who’s down there with too much time on her hands
Sure as death and taxes she’s in need of a man
I only know I gotta get there
Before she gets out of hand…

Leavin’ Telephone, TX, just as fast as I can
Keepin’ love under cover
Feelin’ guilty as sin
Leavin Telephone, TX, as she’s sneakin back in
Never know just how long til she’s callin’ again

I enjoyed this record a lot, and it’s worth checking out. You can sample it via Youtube.

Album Review: Gene Watson and Rhonda Vincent – ‘Your Money And My Good Looks’

What happens when you pair the best male country vocalist of the last 35 years with the reigning Queen of bluegrass music ? You get the best album that will be released in 2011. I can think of no recent duet album that I’ve enjoyed as much as this album. Released on the Upper Management Music label, this album contains the warning ‘Contains REAL Country Music’, and truer words never were spoken.

Although Rhonda is a bluegrass artist, and there are touches of bluegrass on a few of the tracks, this basically is a modern traditional country album, with fiddles, steel guitar and truly outstanding vocals, both individually and in harmony with each other.

The title cut is probably the weakest cut on the album. This isn’t to say that Gene and Rhonda don’t sing it well, because they do, but the song itself is nothing special. The next two tracks “Gone For Good”, a slow ballad about breaking up, and “It Ain’t Nothing New” a mid-tempo ballad co-written by bluegrass legend Larry Cordle, are both really good songs, and on many albums they would be the standout tracks but on this album they are merely the hors d’oeuvres.

With the fourth track the album shifts into overdrive with a cover of Gene Watson’s 1976 hit “You Could Know As Much About A Stranger”. I had never thought about this song as a duet, but it works really well, as Gene and Rhonda trade verses and duet on the choruses, accompanied by a lightly updated version of Gene’s original backing.

From here the album covers a 1977 hit written by Cathy Gosdin for her brother Vern Gosdin, “Til The End”. Covering Vern Gosdin is a treacherous task at best, and while I regard Gene Watson as being the superior overall vocalist, Vern Gosdin had no peers at singing melancholy slow ballads. Still Gene and Rhonda do an admirable job on the song.

The Billy Yates-penned “Alone Together Tonight” is a clever twist on the theme of a lonely boy and lonely girl in a honky-tonk. The melody reminds me of the 1982 John Anderson hit “Would You Catch A Falling Star”.

Next up is a cover of Gary Stewart’s 1974 hit “Out Of Hand”. The arrangement and instrumentation are very similar to Stewart’s recording, but with very slight alterations to the lyrics, it makes a very successful male-female duet.

“This Wanting You” was co-written by Bruce Boulton, T. Graham Brown and Bruce Burch. I don’t recall the song being issued as a single but it was one of the standout tracks on TGB’s 1988 album Come As You Were and also appeared on a Bruce Burch collection.

“Making Everything Perfect Tonight” was penned by Rhonda Vincent, a spirited mid-tempo romp about life and one of the joys of domestic life.

“Sweet Thang” was a top five for its author Nat Stuckey in 1966; however, no one remembers Nat’s version anymore because of the spirited version done by the dynamic duo of Ernest Tubb and Loretta Lynn the following year. While the ET-LL version wasn’t a big radio hit, it was a popular concert favorite for years to follow. Gene doesn’t have quite the same degree of ‘rascal’ in his voice that Ernest did, but his vocals are better.

Saving the best for last, Gene and Rhonda demonstrate their blues chops on the old Hank Williams classic, “My Sweet Love Ain’t Around”. The track runs over five minutes so even in the good old days, it wouldn’t have received much airplay. I referred to Gene Watson as the best male vocalist currently performing in country music today but Rhonda Vincent may be the best female vocalist in country music, although most of her efforts have been focused on bluegrass. Rhonda had a crack at becoming a mainstream country star on Giant Records back in the 1990s but was let down by the material the label foisted off on her. Carrie Underwood should listen to this track, as she could learn a lot about singing from Rhonda’s vocals on this track. Carrie has a vocal range very similar to Rhonda’s but with much less command and control of her vocal abilities.

This album won’t be released until June 6, 2011. By then I will have listened to the album a couple dozen times !