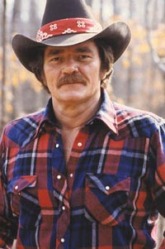 For a brief period in the late 1970s to mid 80s, Ed Bruce seemed to be everywhere–hit songs as a songwriter, hit records as a recording artist and regular appearances on the television show Bret Maverick.

Like many other artists, Ed Bruce got his start as a rockabilly singer signed to Sun Records; however, for him the sun would not shine while at Sun. Indeed, it would take twenty years of plugging away for him to become known in the world of country music.

William Edwin Bruce, Jr. was born in Keiser, Arkansas, in 1939; however, the family moved to Memphis when Ed was quite young. Ed started writing songs as a teenager and, as Edwin Bruce, he cut his first sides for Sun in 1956 at the age of 17. With Elvis, Johnny Cash, Jerry Lee Lewis and other great artists signed to Sun, Ed was lost in the shuffle. A cut on the B-side of Tommy Roe’s million seller “Sheila” provided Ed with the funding necessary for a move to Nashville in 1962.

The next year, Charlie Louvin recorded “See The Big Man Cry,” earning Ed his first BMI award, with other cuts to follow including Kenny Price’s recording of “Northeast Arkansas Mississippi County Bootlegger”. He also became a member of the Marijohn Wilkin Singers, performing live and as a backing vocalist. His warm, friendly voice made him a natural for voiceovers and he soon achieved success singing advertising jingles; his best-known advertising campaign cast him as a character called the Tennessean.

Recording success came more slowly. In 1966, Ed Bruce signed with RCA, notching his first chart hit with the single “Walker’s Woods”. After that he recorded for Monument Records, releasing the singles “Song For Ginny” and “Everybody Wants To Get To Heaven.” In 1973, a deal with United Artists resulted in the minor chart hit “July, You‘re A Woman”. Ed spent four years hosting an early morning TV show on Nashville’s WSM.

Finally, in 1975, Ed’s composition “Mammas Don’t Let Your Babies Grow Up to Be Cowboys” made it into the Top 20. The song, Ed’s best-known, became a huge hit when covered by Waylon Jennings & Willie Nelson in 1977. The song was nominated for, and won, a Grammy in 1978. That same year, “Texas When I Die”, as recorded by Tanya Tucker, was nominated for Grammy and CMA Awards.
After a brief tenure at Epic Records between 1977 and 78, Ed Bruce finally achieved real success as a recording artist with MCA in the 1980s.

Although not his biggest hit, the imagery in “The Last Cowboy Song” tells you a lot about Ed Bruce’s skills as a songsmith:

Ed returned to RCA for a pair of albums in 1984, with two songs cracking the top twenty: “If It Ain’t Love” (#20 in 1985) and “Nights” (#4 in 1986). After his 1986 album Night Things and a 1988 self-titled follow-up, Bruce made the conscious decision to cut back on his music to focus on his acting career, appearing in several made-for-TV films. With a resume that included a role in the CBS mini-series The Chisolms, the NBC movie The Return of Frank and Jesse James and, of course, as co-star of the television show Bret Maverick with James Garner, this seemed the rational thing to do. More film roles followed, as well as a stint as the host of American Sports Cavalcade on The Nashville Network. He also hosted the seven seasons of Truckin’ USA, also on TNN. Ed continued to record music occasionally, as well.

Vinyl
Ed was not the most prolific recording artist. He issued four RCA albums, one on Monument, one on United Artists, two on Epic and six on MCA. These, of course, are all out of print (but are worth the effort to find used copies). Ed also issued a number of 45 RPM singles, on various labels – good luck in tracking those down!

CD
The Ernest Tubb Record Shop currently has six titles by Ed Bruce available for sale. Three of the titles are of religious material on the EB label; I’ve not heard these, so I won’t comment on them.

12 Classics (Varese) issued in 2003 consists of re-recorded tracks from Ed’s years with MCA, including his biggest hits. These recordings are not bad, but they do not measure up to the now out-of print Varese set issued in 1995 titled The Best of Ed Bruce, which had 15 original MCA tracks and three RCA hits from his second stint with the label.

Puzzles, a Bear Family CD issued around 1995, gathers up the music Ed recorded for RCA between 1966 and 1968. “Walker’s Woods” is the biggest hit collected here, but his recording of the Monkees’ hit “Last Train to Clarksville” is also worthwhile.

The Tennessean / Cowboys & Dreamers is a two-fer released by British label Hux. This pairing takes a pair of recordings released in 1978 & 1979 on the Epic label, just before Ed’s breakthrough on MCA. Ed charted six records while on Epic, none of which reached the top forty, but there are some great song on this pairing.

This Old Hat is a CD produced and released by Ed in 2002, consisting of 11 new tunes, plus new renditions of “You’re The Best Break This Old Heart Ever Had” and “My First Taste of Texas.” The physical CD is out of print, but it is available on Amazon MP3 and iTunes.